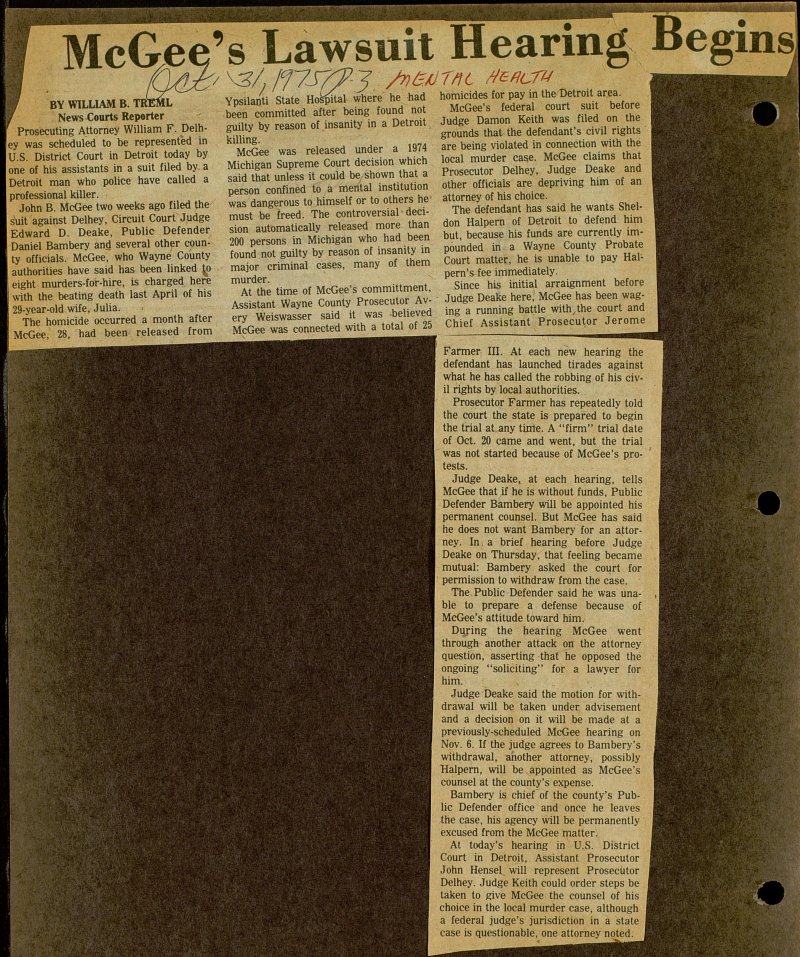 Prosecuting Attorney William F. Delhey was scheduled to be representad in U.S. District Court in Detroit today by one of his assistants in a suit filed by a Detroit man who pólice have called a professional killer. John B. McGee two weeks ago filed the suit against Delhey, Circuit Court Judge Edward D. Deake, Public Defender Daniel Bambery and several other county officials. McGee, who Wayne County authorities have said has been linked Jp f eight murders-for-hire, is charged here 1 with the beating death last April of his I 29-year-old wife, Julia. ! The homicide occurred a month after I McGee, 28, had been released from - I ' - ' y ' ' Ypsilanti State HoíSpital where he had been committed after being found not guilty by reason of insanity in a Detroit killing. McGee was released under a 1974 Michigan Supreme Court decisión which said that unless it could be shown that a person confined to a mental institution was dangerous to himself or to others he' must be f reed. The controversial decisión automatically released more than 200 persons in Michigan who had been found not guilty by reason of insanity in major criminal cases, many of them murder. At the time of McGee's committment, Assistant Wayne County Prosecutor Avery Weiswasser said it was -believed McGee was connected with a total of 25 fff Ks -' ' homicides for pay in the Detroit área. McGee's federal court suit before Judge Damon Keith was filed on the grounds that the defendant's civil rights are being violated in connection with the local murder case. McGee claims that Prosecutor Delhey, Judge Deake and other officials are depriving him of an I attorney of his choice. I The defendant has said he wants ' don Halpern of Detroit to defend him I but, because his funds are currently impounded in a Wayne County Probate Court matter, he is unable to pay Halpern's-fee immediately. Since his initial arraignment before Judge Deake here,1 McGee has been waging a running battle with, the court and Chief Assistant Prosecutor Jerome f ■ Farmer III. At each new hearing the defendant has launched tirades against what he has called the robbing of his civil rights by local authorities. Prosecutor Farmer has repeatedly told the court the state is prepared to begin the trial at.any tinte. A "firm" trial date of Oct. 20 carne and went, but the trial was not started because of McGee's proI tests. Judge Deake, at each hearing, tells McGee that if he is without funds, Public Defender Bambery will be appointed his permanent counsel. But McGee has said he does not want Bambery for an ajtorney. In. a brief hearing before Judge Deake on Thursday, that feeling became mutual: Bambery asked the court for permission to withdraw from the case. The Public Defender said he was , ble to prepare a defense because of McGee's attitude toward him. During the hearing McGee went through another attack on the attorney question, asserting that he opposed the ongoing "soliciting" for a lawyer for him. Judge Deake said the motion for withdrawal will be taken under advisement and a decisión on it will be made at a previously-scheduled McGee hearing on Nov. 6. If the judge agrees to Bambery's withdrawal, another attorney, possibly I Halpern, will be appointed as McGee's counsel at the county's expense. Bambery is chief of the county's Public Defender office and once he leaves I the case, his agency will be permanently excused from the McGee matter. I At today's hearing in U.S. District I Court in Detroit, Assistant Prosecutor John Hensel will represent Prosecutor I Delhey. Judge Keith could order steps be J taken to give McGee the counsel of his I choice in the local murder case, although ■ a federal judge's jurisdiction in a state ■ case is questionable, one attorney noted. I