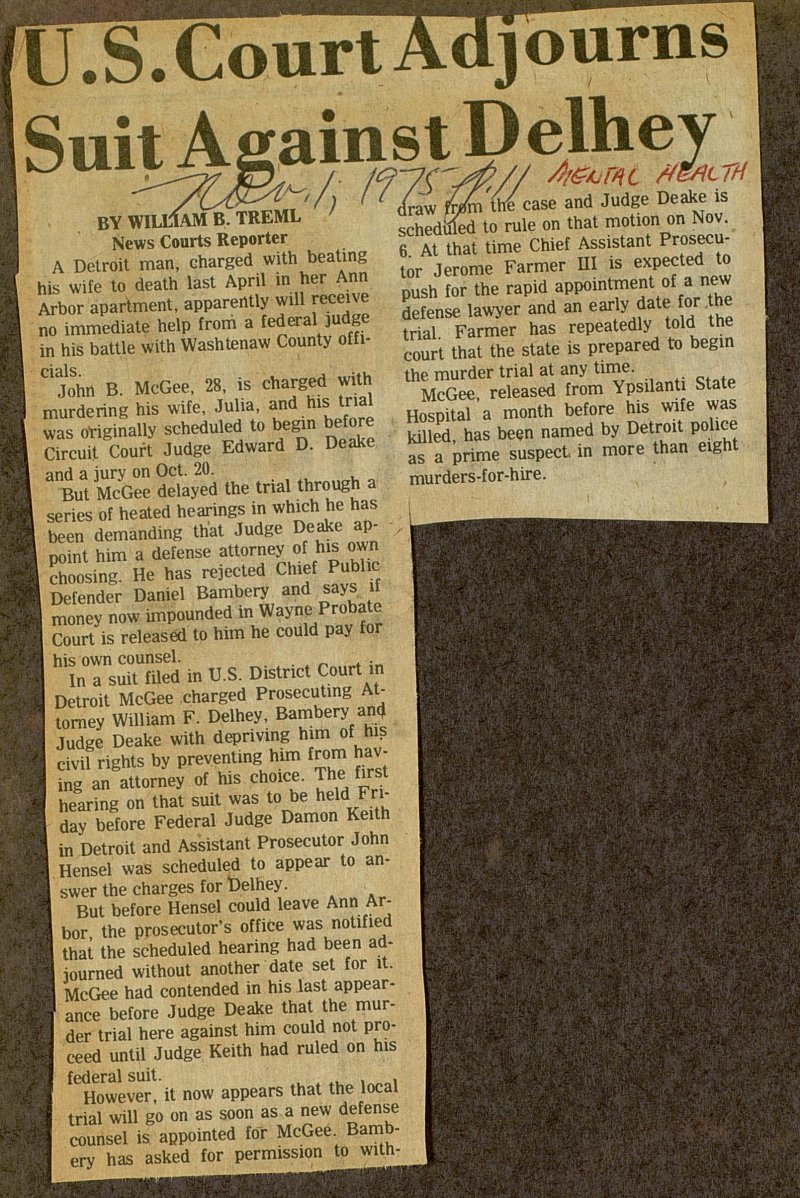 A Detroit man, charged with beaüng his wife to death last April in her Ann Arbor apartment, apparerttly wül receive no immediate help f rom a federal judge I in his battle with Washtenaw County offiCÍJohn B. McGee, 28, is charged with murdering his wife, Julia, and hu ; trial was oïiginally scheduledto begin before Circuit Court Judge Edward D. Deake I and a iury on Oct. 20. I But McGee delayed the trial through a I series of heated hearings in which he has I been demanding that Judge Deake aPI point him a defense attorney of his own I choosing. He has rejected Chief Public ■ Defender Daniel Bambery and says if ■ money now impounded in Wayne , Probate I Court is released to him he could pay for ■ inTsSSi in Ü.S. District Court in I Detroit McGee charged Prosecuting AtI torney William F. Delhey, Bambery and I Judge Deake with depnving hm of his I civil rights by preventing him from hav■ ing an attorney of his choice. The ! first 1 hearing on that suit was to be held FnI day before Federal Judge Damon Keith ■ in Detroit and Assistant Prosecutor John I Hensel was scheduled to appear to an■ swer the charges for Delhey. But before Hensel could leave Ann Ar■ bor, the prosecutor's office was notified I that the scheduled hearing had been ad■ iourned without another date set for ït. I McGee had contended in his last appear■ anee before Judge Deake that the murI der trial here against him could not proI ceed until Judge Keith had ruled on his However.'it now appears that the local trial will go on as soon as a new defense counsel is appointed for McGee Bambery has asked for permission to dïaw fofa ító case and Judge ueare . scheduied to rule on that motion on Nov. ■ 6 At that time Chief Assistant Prosecutor Jerome Farmer III is expected i to push for the rapid appointment of a new defense lawyer and an early date for he trial. Farmer has repeatedly told l the court that the state is prepared to begin the murder trial at any time. McGee released from Ypsilanti State Hospital a month before his wife was S has been named by Detroit pólice as a prime suspect, in more than eight murders-for-hire.