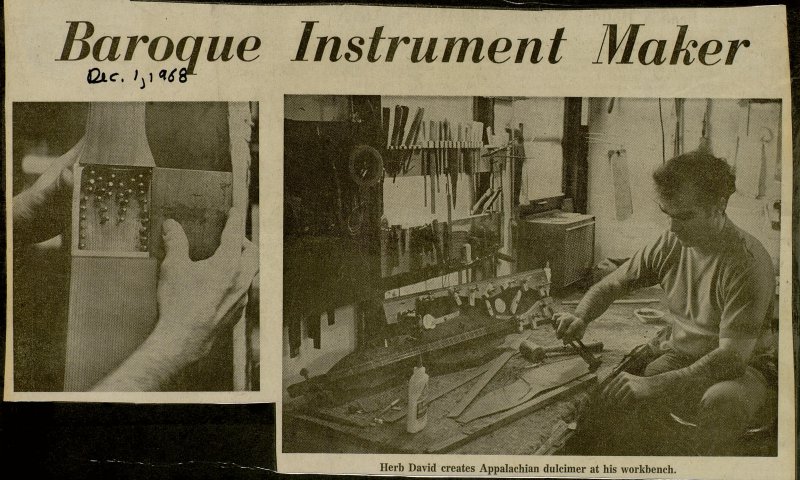 "When I was a kid, I never feit I had any artistic talent at all. In school my pictures from art class never hung on the wall, or if they did the teacher put them behind the door." "I learned to play the trumpet in school, and stuck with it through college and played in the Army Band. I never had a guitar in my hands until an army buddy gave me s o m e lessons on his." "My degree from MSU was in psychology. I published several papers as an undergraduate, and have a couple years credit from Wayne State toward a doctórate." The above quotes fall matiiilM- 'i ter of factly from the lips of Herb David, considered to be one of the foremost makers of baroque stringed instruments in the country, whose instruments have f o u n d homes in museum collections as well as in the hands of musicians both here and abro ad. The quotes seem contradictory to the fact, but, as David explains, "I looked at my life one day and decided that this is really what I wanted to do with it. I was always interested in music, but my parents wanted me 'to get an education', so I complied. But there was always a nagging feeling that something was missing." David, who grew up on Chicago's south side, went into the army after taking his bachelor's at State, and, true to army tradition, found himself not in psychology, but the band. A veteran of dance bands throughout high school and college, he found similar employment off-duty in the army. It was there he became acquainted with, and entranced by, the guitar. Coming back to Ann Arbor after service, he took lessons from a local music teacher, Glenn Hilge, while employed as a research assistant in psychology at the U of M. "I thought at that time that the guitar would be just an interesting hobby. But then I met Sam." Sarkus "Sam" Varjabedian had a small shoe shop on Vernor Ave. in Detroit. In a corner of the back room he repaired stringed instruments, m. ostly the middle eastern ouds and rebeks from his homeland. David, who had taken a guitar there for repair, was fascinated, and stayed to learn the intricacies of woodworking. "Eventually I tried my hand at it. My first instrument was an Arabian rebek, and it was terrible. But the next one improved 100 per cent, and I was hooked. "At that time I was taking gradúate work at Wayne and giving guitar lessons on the side. Eventually the musie became more and more important, and the psychology less, until finally I made the decisión." David opened nis shop, located in the loft above Marshall's Book Store on State SL, in 1962. There he and his staff sell stringed instruments, give lessons, and repair guitars. And, when he can find sufficient time, David carves and creates his own instruments. One of his favorites is the Appalachian .. dulcimer, an easy-to-play instrument n o w undergoing a revival in this country. Another is the lute, the oddly beautiful instrument w h i c h David is shown playing and making in the pictures at the top of this page. As one of the few lutenists in this part of the country, David is frequently called upon for concerts with Baroque string groups. But perhaps the greatest creative joy comes from recreating odd and unusual things, such as the tromba-marine or nun's fiddle and the pochette (also called the pocket fiddle or dancing master's fiddle). The former is a stringed instrument which sounds like a trumpet - its single string on the front bowed like a bass or cello and causing sympathetic vibrations on the inside strings which are tuned to three octaves. The tromba-marine was used to keep time for the oarsmen on galleons, and was also used in cloisters. The pochette was designed to conveniently be carried in the pocket, and while it has not the resonance nor the power of the regular violin, it has the same sound. One of David's pochettes was among the presents given to retiring U-M President Harían Hatcher. In his spare time, and just for fun, David works on such I things as the yet-unfinished chess set (below), or artistic bas-relief wood panels for his house. "I don't kid myself that I'll ever' be rich," says David, J "but Tve found a way to make I my hobby my profession, and I it's very satisfying."