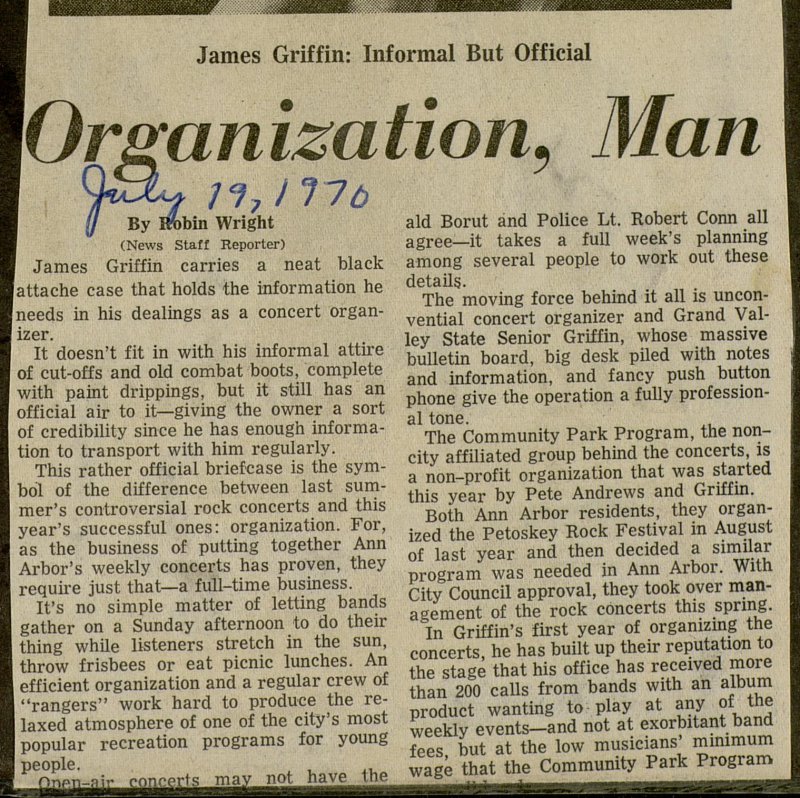 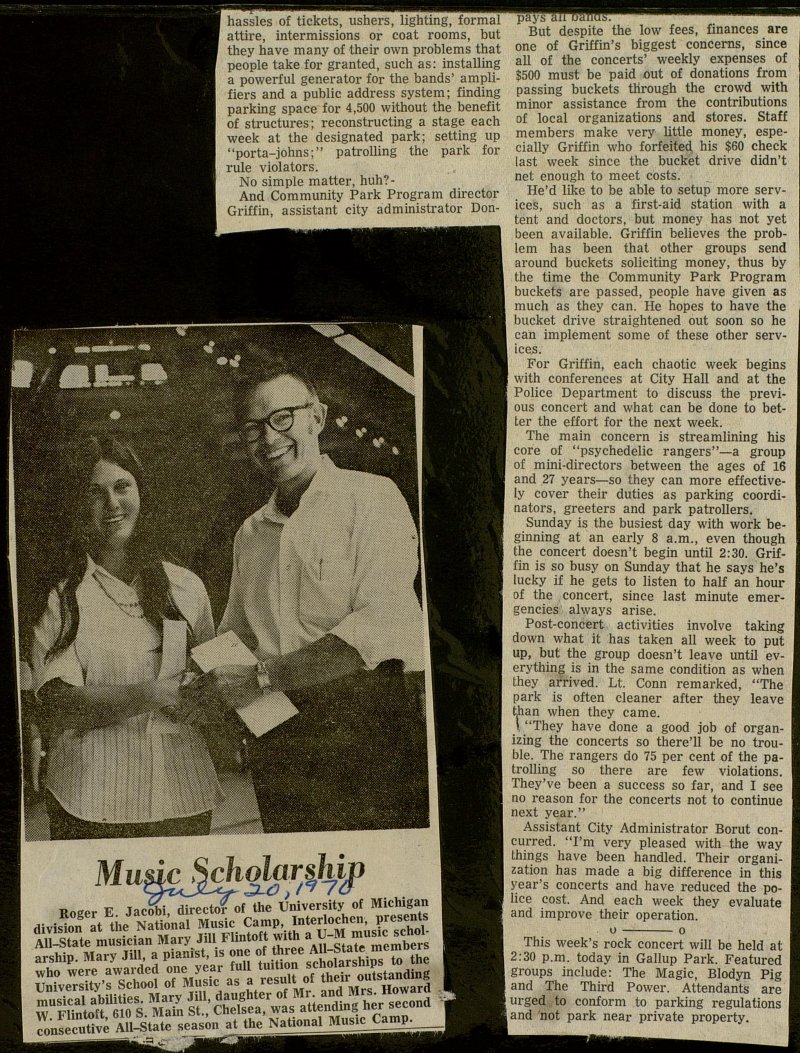 I James Griffin carries a neat black attaché case that holds the information he needs in his dealings as a concert organ! izer. It doesn't fit in with his informal attire of cut-offs and oíd combat boots, complete with paint drippings, but it still has an official air to it- giving the owner a sort of credibility since he has enough information to transport with him regularly. This rather official briefcase is the symbol of the difference between last summer's controversial rock concerts and this year's successful ones: organization. For, as the business of putting together Ann Arbor's weekly concerts has proven, they require just that- a Mi-time business. It's no simple matter of letting bands gather on a Sunday afternoon to do their thing while listeners stretch in the sun, throw frisbees or eat picnic lunches. An efficiënt organization and a regular crew of "rangers" work hard to produce the relaxed atmosphere of one of the city's most I popular recreation programs for young I people. , I Onpn-air ronpprts may not have tne ald Borut and Pólice Lt. Robert Conn all agree- it takes a Ml week's planning among several people to work out these details. The moving force behind it all is unconvential concert organizer and Grand Valley State Senior Griffin, whose massive bulletin board, big desk piled with notes and information, and fancy push button phone give the operation a fully professional tone. The Community Park Program, the noncity affiliated group behind the concerts, is a non-profit organization that was started this year by Pete Andrews and Griffin. Both Ann Arbor residents, they organized the Petoskey Rock Festival in August of last year and then decided a similar program was needed in Ann Arbor. With City Council approval, they took over management of the rock concerts this spring. In Griffin's first year of organmng tne concerts, he has built up their reputation to the stage that his office has received more than 200 calis from bands with an album product wanting to-play at any of tne weekly events-and not at exorbitant band fees but at the low musicians minimum wagè that the Community Park Program I hassles of tickets, ushers, lighting, formal ■ attire, intermissions or coat rooms, but ■ they have many of their own problems that I people take for granted, such as: installing I a powerful generator for the bands' ampliI fiers and a public address system; finding parking space for 4,500 without the benefit I of structures; reconstructing a stage each I week at the designated park; setting up I "porta-johns;" patrolling the park for I rule violators. No simple matter, huh?,! And Community Park Program director I Griffin, assistant city administrator pays ainüailQS But despite the low fees, iinances are one of Griffin's biggest concerns, since all of the concerts' weekly expenses of $500 must be paid out of donations from passing buckets ttirough the crowd with minor assistance from the contributions of local organizations and stores. Staff members make very little money, especially Griffin who forfeited his $60 check last week since the bucket drive didn't net enough to meet costs. He'd like to be able to setup more services, such as a first-aid station with a tent and doctors, but money has not yet been available. Griffin believes the problem has been that other groups send around buckets soliciting money, thus by the time the Community Park Program buckets are passed, people have given as much as they can. He hopes to have the bucket drive straightened out soon so he cah implement some of these other servI ices. For Griffin, each chaotic week begins I with conferences at City Hall and at the Pólice Department to discuss the previous concert and what can be done to better the effort for the next week. The main concern is streamlining his core of "psychedelic rangers"- a group of mini-directors between the ages of 16 and 27 years- so they can more effectively cover their duties as parking coördinators, greeters and park patrollers. Sunday is the busiest day with work beginning at an early 8 a.m., even though the concert doesn't begin until 2:30. Griffin is so busy on Sunday that he says he's lucky if he gets to listen to half an hour of the concert, since last minute emergencies always arise. Post-concert activities involve taking down what it has taken all week to put up, but the group doesn't leave until everything is in the same condition as when they airived. Lt. Conn remarked, "The park is often cleaner after they leave than when they came. "They have done a good job of organizing the concerts so there'll be no trouble. The rangers do 75 per cent of the patrolling so there are few violations. They've been a success so far, and I see no reason for the concerts not to continue next year." Assistant City Administrator Borut concurred. "I'm very pleased with the way things have been handled. Their organization has made a big difference in this year's concerts and have reduced the police cost. And each week they evalúate and improve their operation. This week's rock concert will be held at 2:30 p.m. today in Gallup Park. Featured groups include: The Magie, Blodyn Pig and The Third Power. Attendants are urged to conform to parking regulations I ,and not park near private property. b- mm m - i