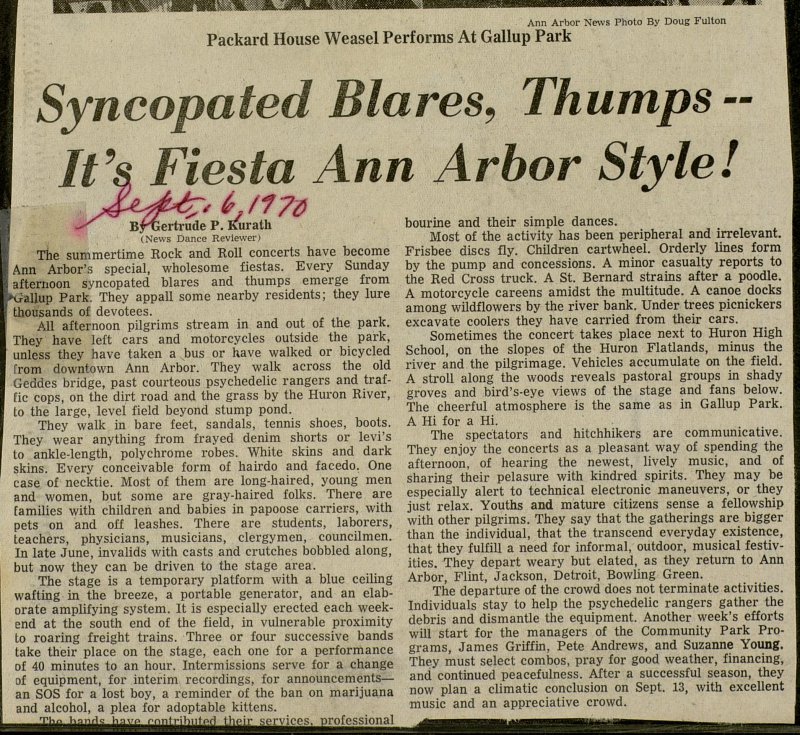 The summertime Rock and Roll concerts have become Ann Arbor's special, wholesome fiestas. Every Sunday afternoon syncopated blares and thumps emerge from Gallup Park. They appall some nearby residents; they lure thousands of devotees. All afternoon pilgrims stream in and out of the park. They have left cars and motorcycles outside the park, unless they have taken a bus or have walked or bicycled from downtown Ann Arbor. They walk across the old Geddes bridge, past courteous psychedelic rangers and traffic cops, on the dirt road and the grass by the Huron River, to the large, level field beyond stump pond. They walk in bare feet, sandals, tennis shoes, boots. They wear anything from frayed denim shorts or levi's to ankle-length, polychrome robes. White skins and dark skins. Every conceivable form of hairdo and facedo. One case of necktie. Most of them are long-haired, young men and women, but some are gray-haired folks. There are families with children and babies in papoose carriers, with pets on and off leashes. There are students, laborers, teachers, physicians, musicians, clergymen, councilmen. In late June, invalids with casts and crutches bobbled along, but now they can be driven to the stage area. The stage is a temporary platform with a blue ceiling wafting in the breeze, a portable generator, and an elabórate amplifying system. It is especially erected each weekend at the south end of the field, in vulnerable proximity to roaring freight trains. Three or four successive bands take their place on the stage, each one for a performance of 40 minutes to an hour. Intermissions serve for a change of equipment, for interim recordings, for announcements - an SOS for a lost boy, a reminder of the ban on marijuana and alcohol, a plea for adoptable kittens. T]ix?--hanrls havp rnnirihuWl Iheir services, professional bourine and their simple dances. Most of the activity has been peripheral and irrelevant. Frisbee discs fly. Children cartwheel. Orderly lines form by the pump and concessions. A minor casualty reports to the Red Cross truck. A St. Bernard strains after a poodle. A motorcycle careens amidst the multitude. A canoe docks among wildflowers by the river bank. Under trees picnickers excávate coolers they have carried from their cars. Sometimes the concert takes place next to Huron High School, on the slopes of the Huron Flatlands, minus the river and the pilgrimage. Vehicles accumulate on the field. A stroll along the woods reveáis pastoral groups in shady groves and bird's-eye views of the stage and fans below. The cheerful atmosphere is the same as in Gallup Park. A Hi for a Hi. The spectators and hitchhikers are communicative. They enjoy the concerts as a pleasant way of spending the afternoon, of hearing the newest, lively music, and of sharing their pelasure with kindred spirits. They may be especially alert to technical electronic maneuvers, or they just relax. Youths and mature citizens sense a fellowship with other pilgrims. They say that the gatherings are bigger than the individual, that the transcend everyday existence, that they fulfill a need for informal, outdoor, musical festivities. They depart weary but elated, as they return to Ann Arbor, Flint, Jackson, Detroit, Bowling Green. The departure of the crowd does not termínate activities. Individuals stay to help the psychedelic rangers gather the debris and dismantle the equipment. Another week's efforts will start for the managers of the Community Park Programs, James Griffin, Pete Andrews, and Suzanne Young. They must select combos, pray for good weather, financing, and continued peacefulness. After a successful season, they now plan a climatic conclusión on Sept. 13, with excellent music and an appreciative crowd. jhmjwm ■MlUMTTTfffUfTWlli'fcÉI TMm groups from Ann Arbor, Detroit, and Rochester. bome or ' them have produced record albums. They have been selected from ïiundreds of volunteers. They are at their best I in the wide, open spaces. ■ ' - 5 Each combo has a distinctive style, and also tries to I present numbers in diverse rhythms and tempi. In I formal garb and manner, the young men play electnc I guitars and percussion instruments, sometimes an organ, I piano, saxophone, flute, fiddle, harmonica, with vocals 1 by males or females. They range from the spnghtly, 1 I ing rhythms of Bob Sheff and His Real Great Band to the 1 booming bass-guitar of the Tackle Box, from singers' shrieks and ear-splitting guitar vibratos, to the subdued I nostalgia of Blues. The Floating Opera fancies the Boogie I Commander Cody echoes Elvis and Hillbilly styles. I Several bands conclude with dexterous, prolonged exhibits I of drum or lead-guitar improvisation. Some groups, like I My Friends, experiment with the reverb, wawa, and other I electronic effects. Others offer expressive, even rituahstic I l creations, like the SRC. Despite the infectious rhythms, the crowd rarely I I ipates. The connoisseurs, seated on the ground near the I I stage, remain decorously attentive through broiling sun or I I cloudburst. A few may clap their hands. Half a dozen boys 1 I and girls may arise to gyrate or sway. On August 2 a I I dance-trained girl improvised fancifully to the downbeat I H of Tea Garden and Van Winkle. On several occasions the I I Hare Krishna cultists, in exotic costumes, clustered on the I I field and performed their own chants with drum and I v