U Carillonneur To Retire Thursday 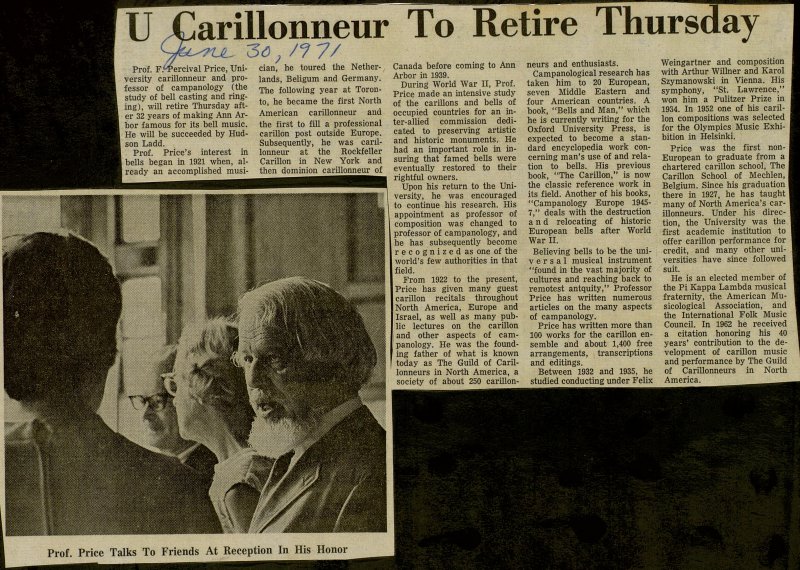 Prof. F Percival Price, UniI versity carillonneur and pro1 fessor of campanology (the I study of bell casting and ringI ing), will retire Thursday aftI er 32 years of making Ann ArI bor famous for its bell music. I He will be succeeded by Hudson Ladd. I Prof. Price's interest in I bells began in 1921 when, alI ready an accomplished musi- ? n 7 cian, he toured the Netherlands, Beligum and Germany. The following year at Toronto, he became the first North American carillonneur and the flrst to fill a professional carillon post outside Europe. Subsequently, he was carillonneur at the Rockfeller Carillon in New York and then dominion carillonneur of Canada before coming to Ann Arbor in 1939. During World War II, Prof. Price made an intensive study of the carillons and bells of occupied countries for an inter-allied commission dedicated to preserving artistic and historie monuments. He had an important role in insuring that famed bells were eventually restored to their rightful owners. Upon his return to the University, he was encouraged to continue his research. His appointment as professor of composition was changed to professor of campanology, and he has subsequently become recognizedas one of the world's few authorities in that field. From 1922 to the present, Price has given many guest carillon recitals throughout North America, Europe and Israel, as well as many public lectures on the carillon and other aspects of campanology. He was the founding father of what is known today as The Guild of Carillonneurs in North America, a society of about 250 neurs and enthusiasts. Campanological research has taken him to 20 European, seven Middle Eastern and four American countries. A book, "Bells and Man," which he is currently writing for the Oxford University Press, is expected to become a standard encyclopedia work concerning man's use of and relation to bells. His previous book, "The Carillon," is now the classic reference work in its field. Another of his books, "Campanology Europe 19457," deals with the destruction and relocating of historie European bells after World War II. Believing bells to be the universal musical instrument "found in the vast majority of cultures and reaching back to remotest antquity," Professor Price has written numerous articles on the many aspects of campanology. Price has written more than 100 works for the carillon ensemble and about 1,400 free arrangements, transcriptions and editings. Between 1932 and 1935, he studied conducting under Felix Weingartner and composition 1 with Arthur Willner and Karol I Szymanowski in Vienna. His I symphony, "St. Lawrence," won him a Pulitzer Prize in I 1934. In 1952 one of his I Ion compositions was selected I for the Olympics Music I bition in Helsinki. Price was the first I European to gradúate from a I chartered carillon school, The I Carillon School of Mechlen, I Belgium. Since his graduation I there in 1927, he has taught I many of North America's I illonneurs. Under his I tion, the University was the I first academie institution to I offer carillon performance for I credit, and many other I versities have since followed I suit. He is an elected member of the Pi Kappa Lambda musical fraternity, the American Musicological Association, and the International Folk Music Council. In 1962 he received a citation honoring his 40 years' contribution to the development of carillon music and performance by The Guild of Carillonneurs in North America. -