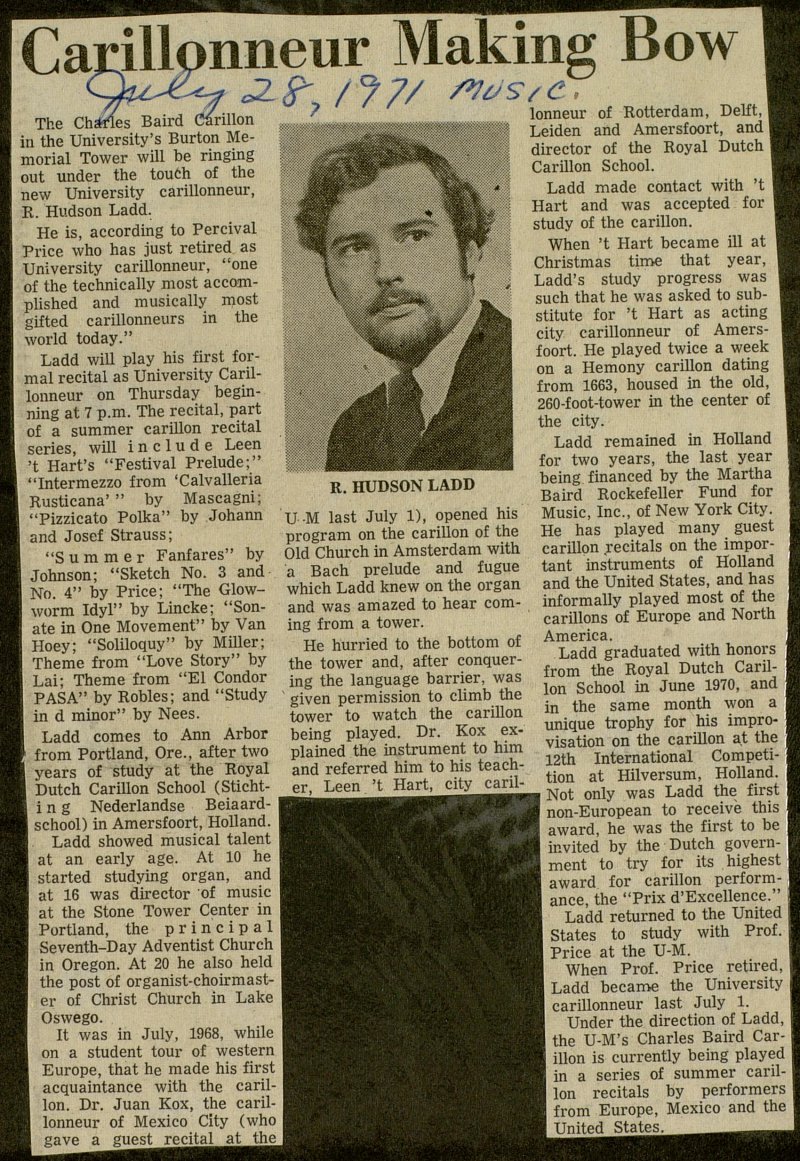 The Charles Baird Carillon in the University's Burton Metoorial Tower will be ringing out under the touch of the new University carillonneur, R. Hudson Ladd. He is, according to Percival Price who has just retired as University carillonneur, "one of the technically most accomplished and musically most gifted carillonneurs in the world today." Ladd will play his first formal recital as University Carillonneur on Thursday beginning at 7 p.m. The recital, part of a summer carillon recital series, will include Leen I 't Hart's "Festival Prelude;" I "Intermezzo from 'Calvalleria I Rusticana' " by Mascagni; I "Pizzicato Polka" by Johann I and Josef Strauss; "Summer Fanfares" by I Johnson; "Sketch No. 3 and I No 4" by Price; "The GlowI worm Idyl" by Lincke; "SonI ate in One Movement" by Van I Hoey; "Soliloquy" by Miller; I Theme from "Love Story" by I Lai; Theme from "El Condor I PASA" by Robles; and "Study I in d minor" by Nees. Ladd comes to Ann Arbor 9 from Portland, Ore., after two years of study at the Royal Dutch Carillon School (StichtI i n g Nederlandse I I school) in Amersfoort, Holland. Ladd showed musical talent at an early age. At 10 he started studying organ, and at 16 was director of music at the Stone Tower Center in Portland, the principal Seventh-Day Adventist Church in Oregon. At 20 he also held the post of organist-choirmaster of Christ Church in Lake Oswego. It was in July, 1968, while on a student tour of western Europe, that he made his first acquaintance with the carillon. Dr. Juan Kox, the carillonneur of Mexico City (who I gave a guest recitaahe U-M last July 1), opened his program on the carillon of the Old Church in Amsterdam with a Bach prelude and fugue which Ladd knew on the organ and was amazed to hear coming from a tower. He hurried to the bottom of the tower and, af ter conquering the language barrier, was given permission to climb the tower to watch the carillon being played. Dr. Kox explained the instrument to him and referred him to his teacher, Leen 't Hart, city lonneur of Rotterdam, Delft, Leiden and Amersfoort, andB director of the Royal Dutch Carillon School. Ladd made contact with 't I Hart and was accepted for study of the carillon. When 't Hart became ill at Christmas time that year, I Ladd's study progress was I such that he was asked to I stitute for 't Hart as acting I city carillonneur of I foort. He played twice a week on a Hemony carillon dating from 1663, housed in the old, 260-foot-tower in the center of the city. Ladd remained in Holland for two years, the last year being financed by the Martha Baird Rockefeller Fund for Music, Inc., of New York City. He has played many guest carillon recitals on the tant instruments of Holland and the United States, and has informally played most of the carillons of Europe and North America. Ladd graduated with honors from the Royal Dutch Ion School in June 1970, and j in the same month won a unique trophy for his visation on the carillon at the 12th International j tion at Hilversum, Holland. Not only was Ladd the first non-European to receivè this award, he was the first to be invited by the Dutch government to try for its highest award for carillon performI anee, the "Prix d'Excellence." Ladd returned to the United States to study with Prof. Price at the U-M. When Prof. Price retired, Ladd became the University carillonneur last July 1. Under the direction of Ladd, the U-M's Charles Baird Carilion is currently being played in a series of summer carillon recitals by performers from Europe, Mexico and the United States.