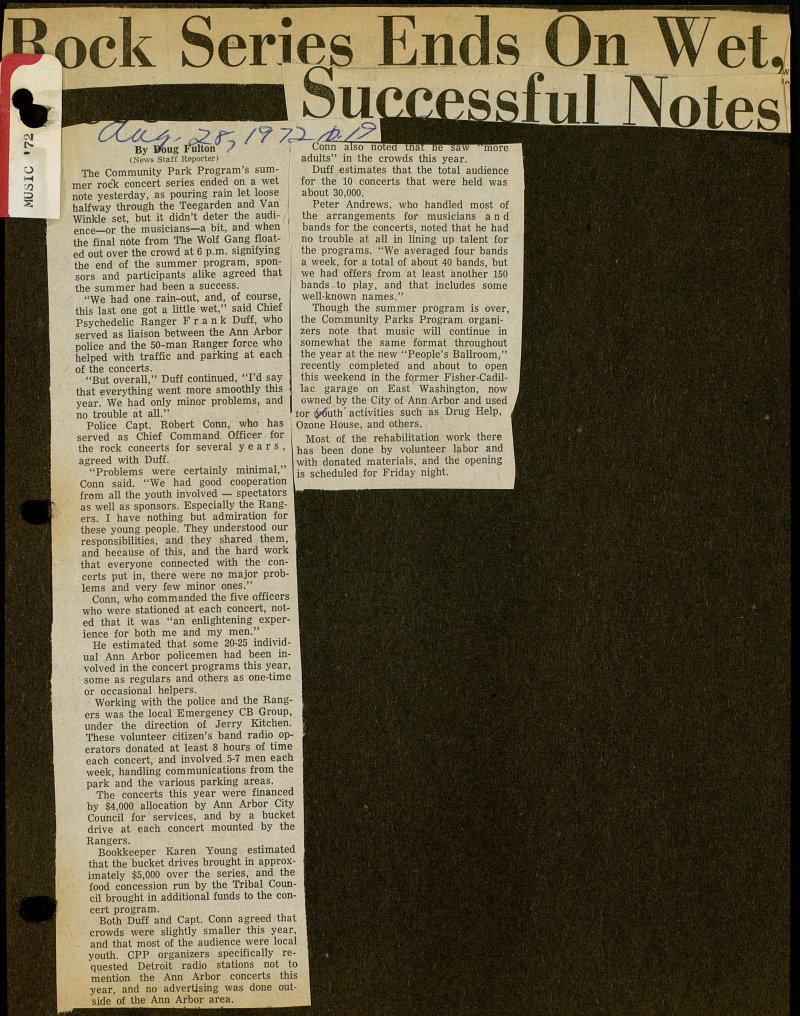 The Community Park Program's summer rock concert series ended on a wet note yesterday, as pouring rain let loose halfway through the Teegarden and Van ■ Winkle set, but it didn't deter the ( ence_or the musicians- a bit, and when the final note from The Wolf Gang floated out over the crowd at 6 p.m. signifying the end of the summer program, sponsors and participants alike agreed that the summer had been a success. "We had one rain-out, and, of course, this last one got a little wet," said Chief Psychedelic Ranger Frank Duff, who served as liaison between the Ann Arbor pólice and the 50-man Ranger force who helped with trafiic and parking at each of the concerts. "But overall," Duff continued, "I'd say that everything went more smoothly this year. We had only minor problems, and no trouble at all." Pólice Capt. Robert Conn, who has served as Chief Command Officer for the rock concerts for several y e a r s , agreed with Duff. "Problems were certainly minimal," Conn said. "We had good cooperation írom all the youth involved - spectators as well as sponsors. Especially the Rangers. I have nothing but admiration for j these young people. They understood our responsibilities, and they shared them, and because of this, and the hard work that everyone connected with the concerts put in, there were no major problems and very few minor ones." Conn, who commanded the five officers who were stationed at each concert, not' ed that it was "an enlightening experience for both me and my men." He estimated that some 20-25 individual Ann Arbor policemen had been involved in the concert programs this year, some as regulars and others as one-time or occasional helpers. Working with the pólice and the Kangers was the local Emergency CB Group, under the direction of Jerry Kitchen. These volunteer citizen's band radio operators donated at least 8 hours of time each concert, and involved 5-7 men each week, handling Communications from the park and the various parking areas. I The concerts this year were financed by $4,000 allocation by Ann Arbor City Council for services, and by a bucket drive at each concert mounted by the Rangers. Bookkeeper Karen Young estimated that the bucket drives brought in approximately $5,000 over the series, and the food concession run by the Tribal Council brought in additional funds to the conti eert program. Both Duff and Capt. Conn agreed that crowds were slightly smaller this year, and that most of the audience were local youth. CPP organizers specifically requested Detroit radio stations not to mention the Ann Arbor concerts this year, and no advertising was done outside of the Ann Arbor area. _ - fL-A-Wk BR Conn also noted tnat ne saw "more adults" in the erowds this year. Duff estimates that the total audience for the 10 concerts that were held was about 30,000. Peter Andrews, who handled most of the arrangements for musicians and bands for the concerts, noted that he had no trouble at all in lining up talent for the programs. "We averaged four bands a week, for a total of about 40 bands, but we had offers from at least another 150 bands to play, and that includes some well-known names." Though the summer program is over, the Community Parks Program organizers note that music will continue in somewhat the same format throughout the year at the new "People's Ballroom," recently completed and about to open this weekend in the former I lac garage on East Washington, now I owned by the City of Ann Arbor and used J tor 45uth' activities such as Drug Help, M Ozone House, and others. I Most of the rehabilitation work there ■ has been done by volunteer labor and ■ with donated materials, and the opening I is scheduled for Friday night.