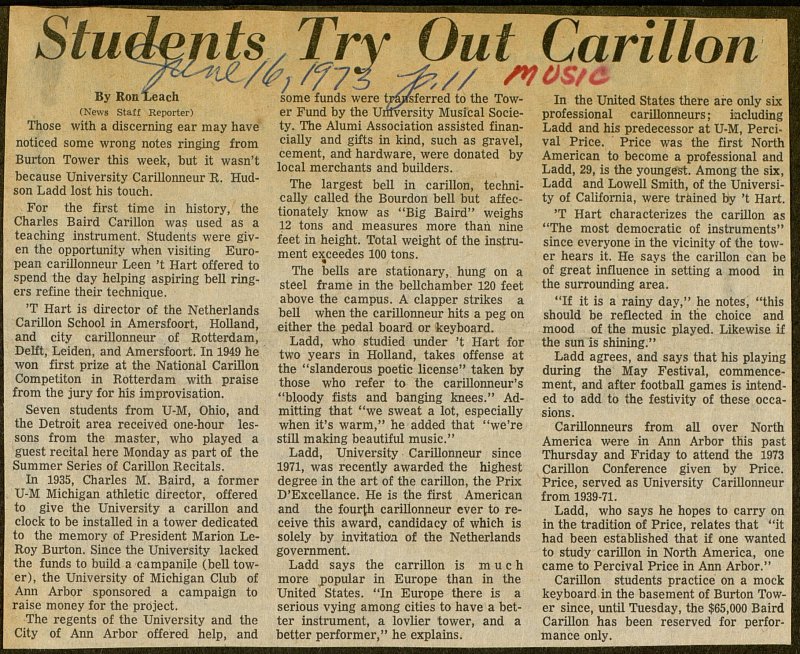 Those with a discerning ear may have noticed some wrong notes ringing from Burton Tower this week, but it wasn't because University Carillonneur R. Hudson Ladd lost his touch. For the first time in history, the Charles Baird Carillon was used as a teaching instrument. Students were given the opportunity when visiting European carillonneur Leen 't Hart offered to spend the day helping aspiring bell ringers refine their technique. 'T Hart is director of the Netherlands Carillon School in Amersfoort, Holland, and city carillonneur of Rotterdam, Delft, Leiden, and Amersfoort. In 1949 he won first prize at the National Carillon Competiton in Rotterdam with praise from the jury for his improvisation. Seven students from U-M, Ohio, and the Detroit área received one-hour lessons from the master, who played a guest recital here Monday as part of the Summer Series of Carillon Recitals. In 1935, Charles M. Baird, a former U-M Michigan athletic director, offered to give the University a carillon and clock to be installed in a tower dedicated to the memory of President Marión LeRoy Burton. Since the University lacked the funds to build a campanile (bell tower), the University of Michigan Club of Ann Arbor sponsored a campaign to raise money for the project. The regents of the University and the City of Ann Arbor offered help, and some funds were trajreferred to the Tower Fund by the Untversity Musical Society. The Alumi Association assisted financially and gifts in kind, such as gravel, cement, and hardware, were donated by local merchants and builders. The largest bell in carillon, technically called the Bourdon bell but affectionately know as "Big Baird" weighs 12 tons and measures more thañ nine feet in height. Total weight of the instrument exceedes 100 tons. The bells are stationary, hung on a steel frame in the bellchamber 120 feet above the campus. A clapper strikes a bell when the carillonneur hits a peg on either the pedal board or keyboard. Ladd, who studied under 't Hart for two years in Holland, takes offense at the "slanderous poetic license" taken by those who refer to the carillonneur's "bloody fists and banging knees." Admitting that "we sweat a lot, especially when it's warm," he added that "we're still making beautiful music." Ladd, University Carillonneur since 1971, was recently awarded the highest degree in the art of the carillon, the Prix D'Excellance. He is the first American and the fourth carillonneur ever to receive this award, candidacy of which is solely by invitation of the Netherlands government. Ladd says the carrillon is m u c h more popular in Europe than in the United States. "In Europe there is a serious vying among cities to have a better instrument, a lovlier tower, and a better performer," he explains. In the United States there are only six professional carillonneurs ; including Ladd and nis predecessor at U-M, Percival Price. Price was the first North American to become a professional and Ladd, 29, is the youngest. Among the six, I Ladd and Lowell Smith, of the University of California, were trained by 't Hart. 'T Hart characterizes the carillon as "The most democratie of instruments" since everyone in the vicinity of the tower hears it. He says the carillon can be of great influence in setting a mood in the surrounding area. "If it is a rainy day," he notes, "this should be reflected in the choice and mood of the music played. Likewise if the sunis shining." Ladd agrees, and says that his playing during the May Festival, commencement, and after football games is intended to add to the festivity of these occasions. Carillonneurs from all over North America were in Ann Arbor this past Thursday and Friday to attend the 1973 Carillon Conference given by Price. Price, served as University Carillonneur from 1939-71. Ladd, who says he hopes to carry on in the tradition of Price, relates that "it had been established that if one wanted to study carillon in North America, one came to Percival Price in Ann Arbor." Carillon students practice on a mock keyboard in the basement of Burton Tower since, until Tuesday, the $65,000 Baird Carillon has been reserved for performance only.