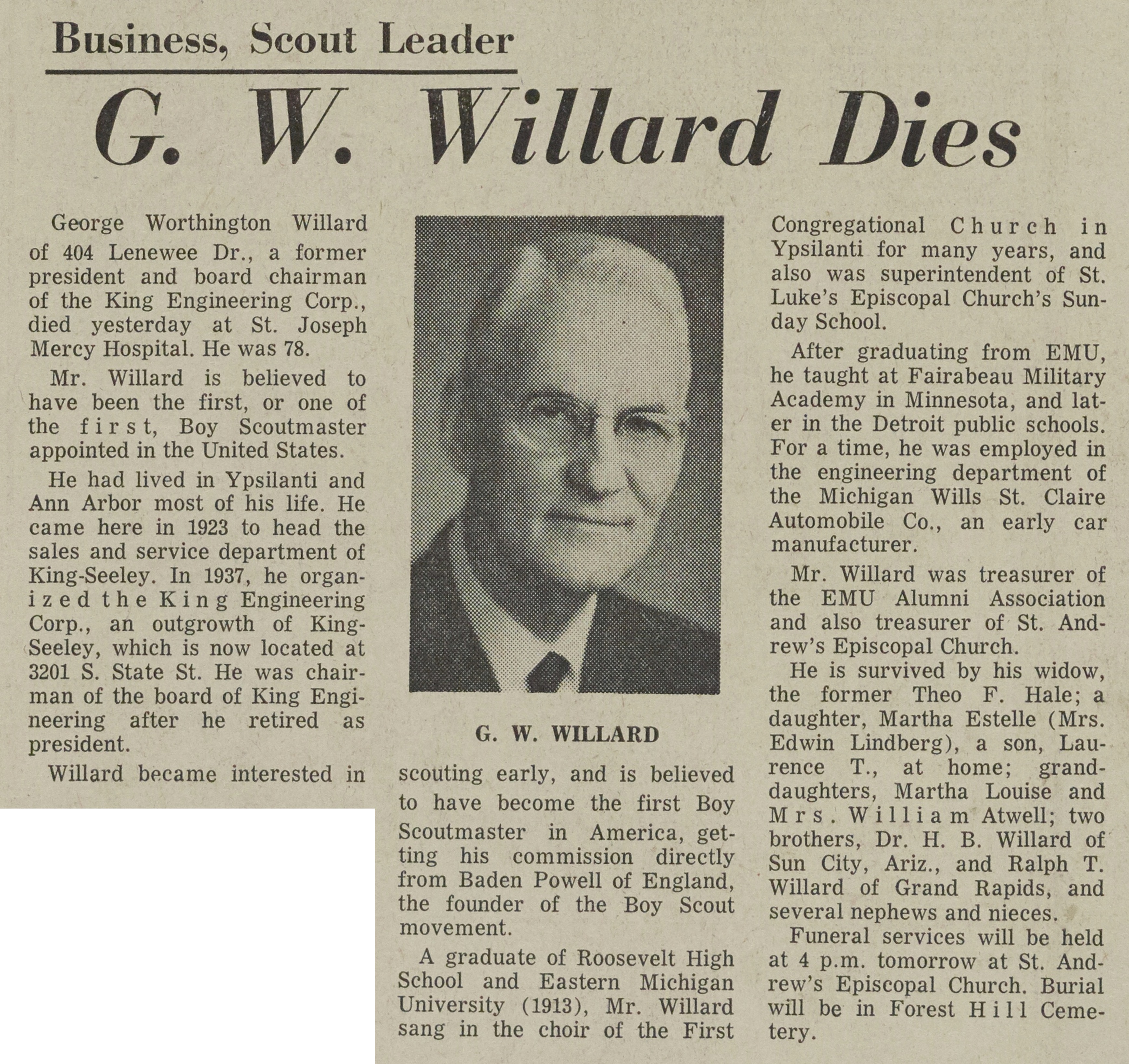 George Worthington Willard of 404 Lenewee Dr., a former president and board chairman of the King Engineering Corp., died yesterday at St. Joseph Mercy Hospital. He was 78. Mr. Willard is believed to have been the first, or one of the first, Boy Scoutmaster appointed in the United States. He had lived in Ypsilanti and Ann Arbor most of his life. He came here in 1923 to head the sales and service department of King-Seeley. In 1937, he organized the King Engineering Corp., an outgrowth of KingSeeley, which is now located at 3201 S. State St. He was chairman of the board of King Engineering after he retired as president. Willard became interested in scouting early, and is believed to have become the first Boy Scoutmaster in America, getting his commission directly from Baden Powell of England, the founder of the Boy Scout movement. A gradúate of Roosevelt High School and Eastern Michigan University (1913), Mr. Willard sang in the choir of the First ■liMI I Congregational C h u r c h in Ypsilanti for many years, and also was superintendent of St. Luke's Episcopal Church's Sunday School. After graduating from EMU, he taught at Fairabeau Military Academy in Minnesota, and later in the Detroit public schools. For a time, he was employed in the engineering department of the Michigan Wills St. Claire Automobile Co., an early car manufacturer. Mr. Willard was treasurer of the EMU Alumni Association and also treasurer of St. Andrew's Episcopal Church. He is survived by his widow, the former Theo F. Hale; a daughter, Martha Estelle (Mrs. Edwin Lindberg), a son, Laurence T., at home; granddaughters, Martha Louise and Mrs. W i 1 1 i a m Atwell; two brothers, Dr. H. B. Willard of Sun City, Ariz., and Ralph T. Willard of Grand Rapids, and several nephews and nieces. Funeral services will be held at 4 p.m. tomorrow at St. Andrew's Episcopal Church. Burial will be in Forest H i 1 1 Cemetery.