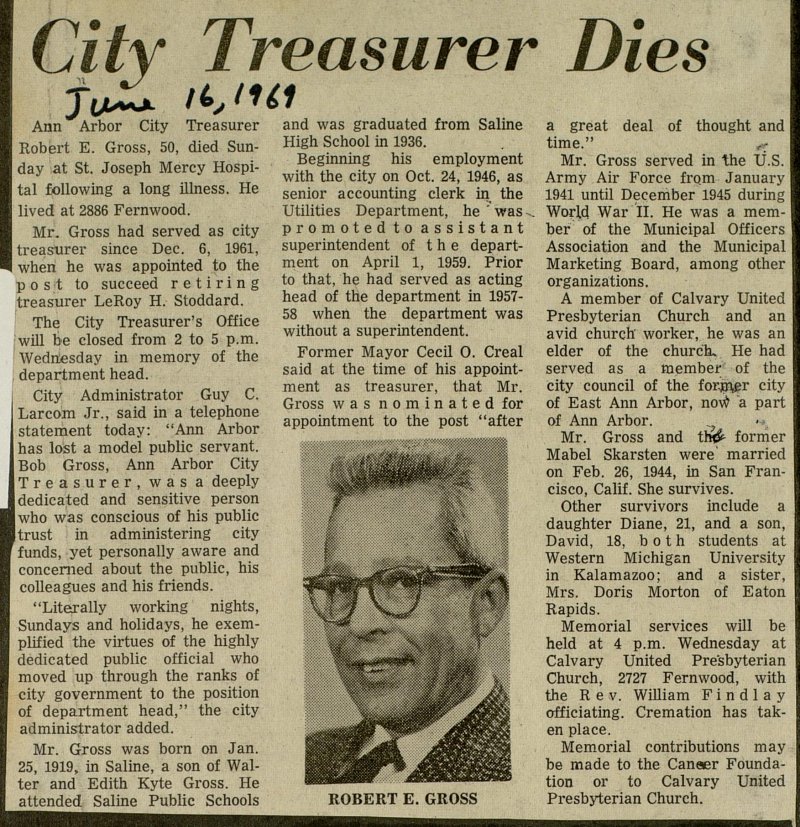 Ann Arbor City Treasurer Robert E. Gross, 50, died Sunday at St. Joseph Mercy Hospital following a long illness. He lived at 2886 Fernwood. Mr. Gross had served as city treasurer since Dec. 6, 1961, when he was appointed to the post to succeed r e t i r i n g treasurer LeRoy H. Stoddard. The City Treasurer's Office will be closed from 2 to 5 p.m. Wedrtesday in memory of the department head. City Administrator Guy C. Larcom Jr., said in a telephone statement today: "Ann Arbor has lost a model public servant. Bob Gross, Ann Arbor City Treasurer, was a deeply dedicated and sensitive person who was conscious of his public I trust in administering city funds, yet personally aware and concenied about the public, his colleagues and his friends. "Litexally working nights, Sundays and holidays, he exemplified the virtues of the highly dedicated public official who moved up through the ranks of city government to the position of department head," the city administrator added. Mr. Gross was bom on Jan. 25, 1919, in Saline, a son of Walter and Edith Kyte Gross. He attended Saline Public Schools and was graduated from Saline High School in 1936. Beginning his employment with the city on Oct. 24, 1946, as senior accounting clerk in the Utilities Department, he ' was -. promoted to assistant superintendent of t h e department on April 1, 1959. Prior to that, he had served as acting head of the department in 195758 when the department was without a superintendent. Former Mayor Cecil O. Creal said at the time of his appointment as treasurer, that Mr. Gross was nominated for appointment to the post "after a great deal of thought and time." Mr. Gross served in the U.S. Army Air Force from January 1941 until December 1945 during World War II. He was a member of the Municipal Officers Association and the Municipal Marketing Board, among other organizations. A member of Calvary United Presbyterian Church and an avid church worker, he was an eider of the church. He had served as a tnember of the city council of the forjpijêr city of East Ann Arbor, now "a part of Ann Arbor. Mr. Gross and former Mabel Skarsten were married on Feb. 26, 1944, in San Francisco, Calif. She survives. Other survivors include a daughter Diane, 21, and a son, David, 18, b o t h students at Western Michigan University in Kalamazoo; and a sister, Mrs. Doris Morton of Eaton Rapids. Memorial services wül be held at 4 p.m. Wednesday at Calvary United Presbyterian Church, 2727 Fernwood, with the R e v. William F i n d 1 a y officiating. Cremation has taken place. Memorial contributions may be made to the Canaer Foundation or to Calvary United Presbyterian Church.