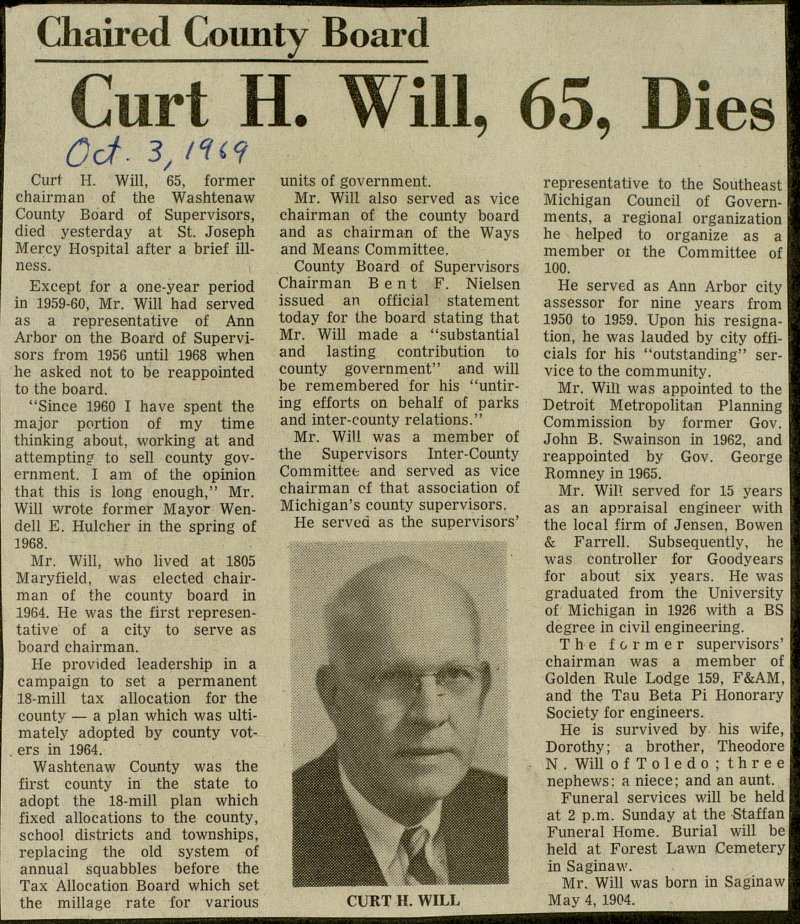 UU -, ' l r Curt H. Will, 65, former chairman of the Washtenaw County Board of Supervisors, died yesterday at St. Joseph Mercy Hospital after a brief illness. Except for a one-year period in 1959-60, Mr. Will had served as a representa tive of Ann Arbor on the Board of Supervisors from 1956 until 1968 when he asked not to be reappointed to the board. "Since 1960 I have spent the major portion of my time thinking about, working at and attemptin to sell county government. I am of the opinión that this is long enough," Mr. Will wrote former Mayor Wendell E. Hulcher in the spring of 1968. Mr. Will, who lived at 1805 Maryfield, was elected chairman of the county board in 1964. He was the first representative of a city to serve as board chairman. He provided leadership in a campaign to set a permanent 18-mill tax allocation for the county - a plan which was ultimately adopted by county vot. ers in 1964. Washtenaw County was the first county in the state to adopt the 18-mill plan which fixed allocations to the county, school districts and townships, replacing the old system of annual squabbles before the Tax Allocation Board which set the millage rate for various units of government. Mr. Will also served as vice chairman of the county board and as chairman of the Ways and Means Committee. County Board of Supervisors Chairman Bent F. Nielsen issued an official statement today for the board stating that Mr. Will made a "substantial and lasting contribution to county government" and will be remembered for his "untiring efforts on behalf of parks and inter-county relations." Mr. Will was a member of the Supervisors Inter-County and served as vice chairman ef that association of Michigan's county supervisors. He served as the supervisors' representative to the Southeast Michigan Council of Governments, a regional organization I he helped to organize as a I member ot the Committee of 100. He served as Ann Arbor city I assessor for nine years from I 1950 to 1959. Upon his resignation, he was lauded by city officials for his "outstanding" service to the community. Mr. Will was appointed to the Detroit Metropolitan Planning Commission by former Gov. John B. Swainson in 1962, and reappointed by Gov. George Romney in 1965. Mr. Wil? served for 15 years as an apnraisal engineer with the local íirm of Jensen, Bowen & Farrell. Subsequently, he was controller for Goodyears for about six years. He was graduated from the University of Michigan in 1926 with a BS degree in civil engineering. The former supervisors' chairman was a member of Golden Rule Lodge 159, F&AM, and the Tau Beta Pi Honorary Society for engineers. He is survived by his wife, Dorothy; a brother, Theodore N . Will ofToledo; three nephews: a niece; and an aunt. Funeral services will be held at 2 p.m. Sunday at the Staffan Funeral Home. Burial will be held at Forest Lawn Cemetery in Saginaw. Mr. Will was born in Saginaw May 4, 1904.