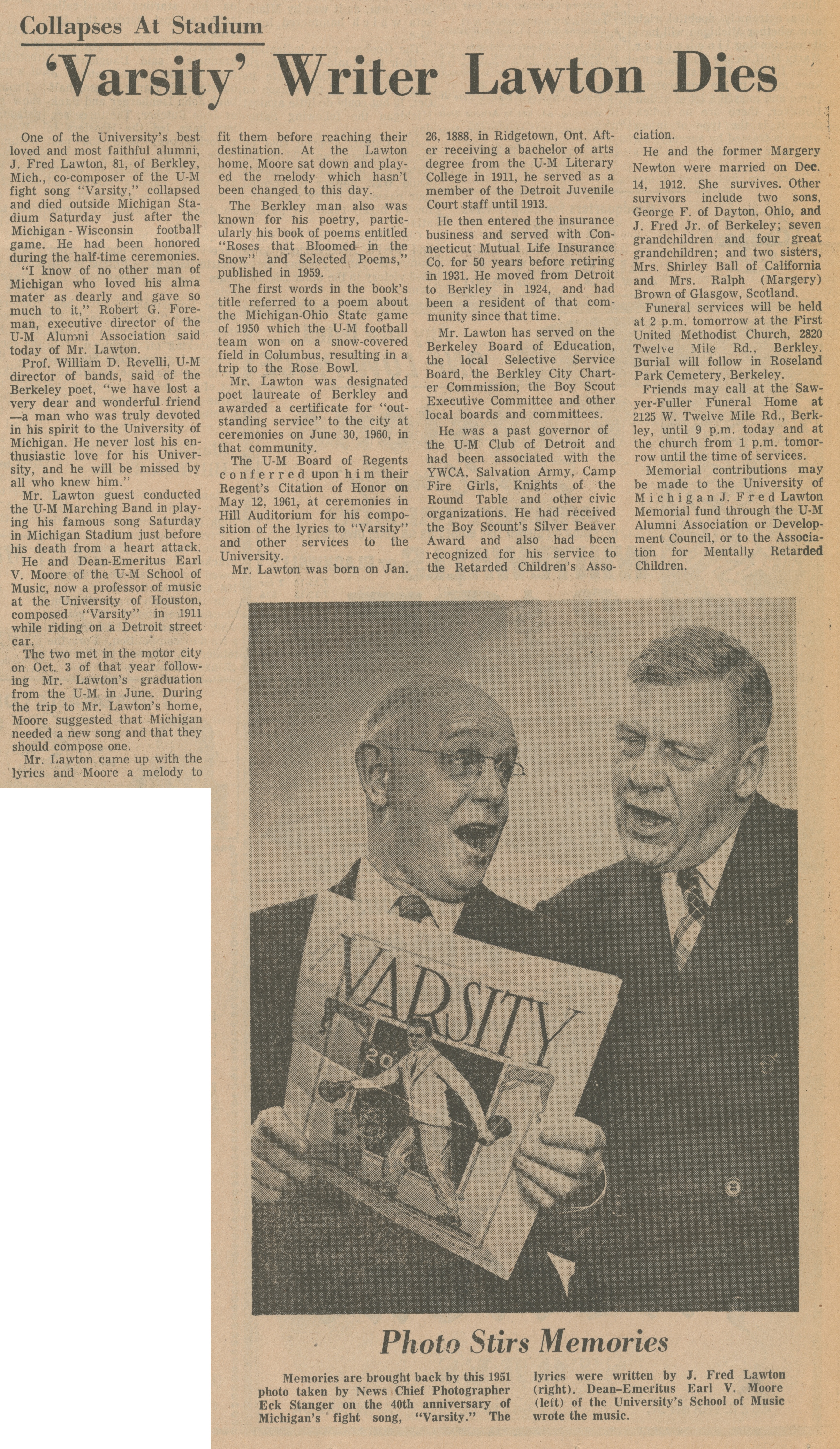 One of the University's best loved and most faithful alumni, J. Fred Lawton, 81, of Berkley, Mich., co-composer of the U-M fight song "Varsity," collapsed and died outside Michigan Stadium Saturday just after the Michigan - Wisconsin football game. He had been honored I during the half-time ceremonies. "I know of no other man of Michigan who loved his alma I mater as dearly and gave so much to it," Robert G. Foreman, executive director of the U-M Alumni Association said today of Mr. Lawton. Prof. William D. Revelli, U-M director of bands, said of the Berkeley poet, "we have lost a very dear and wonderful friend I - a man who was truly devoted in his spirit to the University of Michigan. He never lost his enthusiastic love for his University, and he will. be missed by all who knew him." Mr. Lawton guest conducted the U-M Marching Band in playing his famous song Saturday in Michigan Stadium just before his death from a heart attack. He and Dean-Emeritus Earl V. Moore of the U-M School of Music, now a professor of music at the University of Houston, composed "Varsity" in 1911 while riding on a Detroit street car. The two met in the motor city on Oct. 3 of that year following Mr. Lawton's graduation from the U-M in June. During the trip to Mr. Lawton's home, Moore suggested that Michigan needed a new song and that they should compose one. Mr. Lawton came up with the lyrics and Moore a melody to fit them before rsaching their destination. At the Lawton home, Moore sat down and played the melody which hasn't been changed to this day. The Berkley man also was known for nis poetry, particularly his book of poems entitled "Roses that Bloomed in the Snow" and Selected Poems " published in 1959. The first words in the book's title referred to a poem about the Michigan-Ohio State game of 1950 which the U-M football team won on a snow-covered field in Columbus, resulting in a trip to the Rose Bowl. Mr. Lawton was designated poet lauréate of Berkley and awarded a certifícate for "outstanding service" to the city at ceremonies on June 30, 1960, in that community. The U-M Board of Regents conferred upon h i m their Regent's Citation of Honor on May 12, 1961, at ceremonies in Hill Auditorium for his composition of the to "Varsity" and other services to the University. Mr. Lawton was born on Jan. 26, 1888, in Ridgetown, Ont. After receiving a bachelor of arts degree from the U-M Literary College in 1911, he served as a member of the Detroit Juvenile Court staff until 1913. He then entered the insurance business and served with Connecticut Mutual Life Insurance Co. for 50 years before retiring in 1931. He moved from Detroit to Berkley in 1924, and had been a resident of that community since that time. Mr. Lawton has served on the Berkeley Board of Education, the local Selective Service Board, the Berkley City Charter Commission, the Boy Scout Executive Committee and other local boards and committees. He was a past governor of the U-M Club of Detroit and had been associated with the YWCA, Salvation Army, Camp Pire Girls, Knights of the Round Table and other civic organizations. He had received the Boy Scount's Silver Beaver Award and also had been recognized for his service to the Retarded Children's ciation. He and the former Margery Newton were married on Dec. 14, 1912. She survives. Other survivors include two sons, George F. of Dayton, Ohio, and J. Fred Jr. of Berkeley; seven grandchildren and four great grandchildren; and two sisters, Mrs. Shirley Ball of California and Mrs. Ralph (Margery) Brown of Glasgow, Scotland. Funeral services will be held at 2 p.m. tomorrow at the First United' Methodist Church, 2820 Twelve Miie Rd.. Berkley. Burial will follow in Roseland Park Cemetery, Berkeley. Friends may cali at the Sawyer-Fuller Funeral Home at 2125 W. Twelve Mile Rd., Berkley, until 9 p.m. today and at the church from 1 p.m. tomorrow until the time of services. Memorial contributions may be made to the University of I Michigan J. Fred Lawton I Memorial fund through the U-M I Alumni Association or I ment Council, or to the I tion for Mentally Retarded I Children.