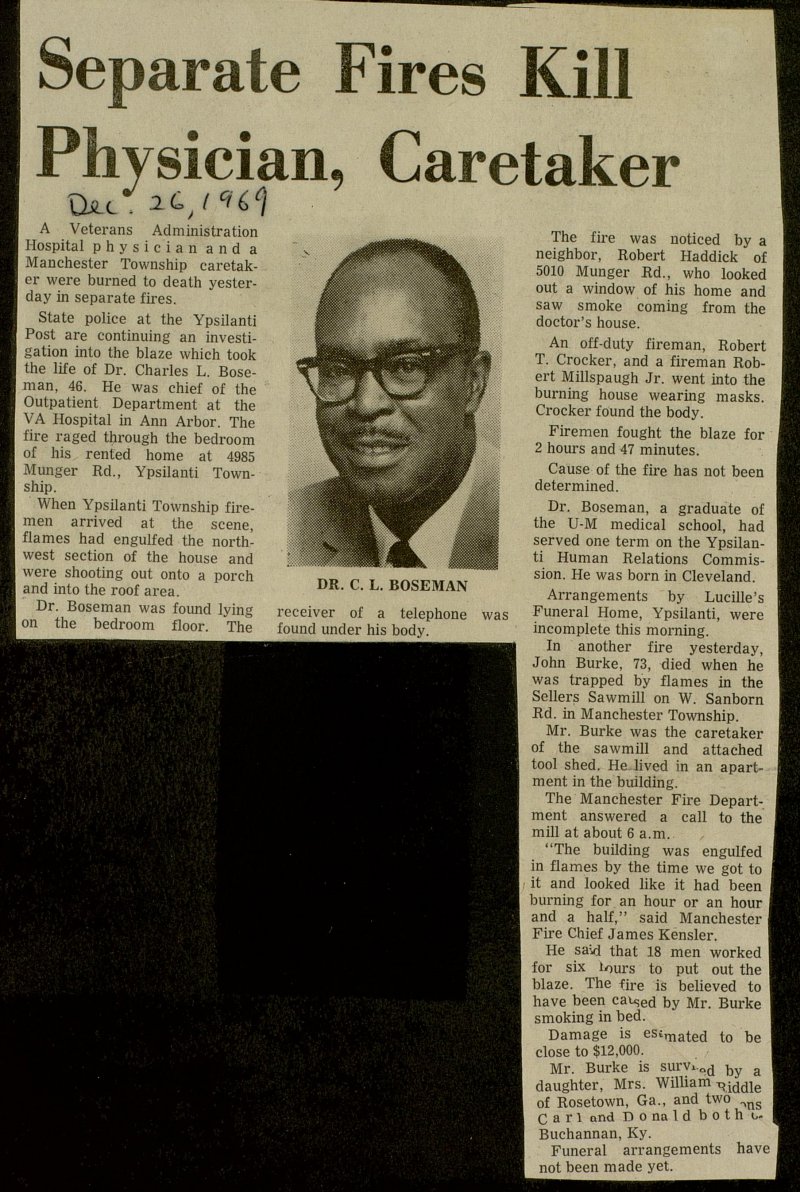 A Veterans Administration Hospital physician and a Manchester Township caretaker were burned to death yesterday in separate fires. ; State pólice at the Ypsilanti I Post are continuing an investiI gation into the blaze which took I the life of Dr. Charles L. Boseman, 46. He was chief of the Outpatient Department at the VA Hospital in Ann Arbor. The fire raged through the bedroom I of his rented home at 4985 Munger Rd., Ypsilanti TownI ship. When Ypsilanti Township fireI men arrived at the scène, I ñames had engulfed the northwest section of the house and were shooting out onto a porch and into the roof area. Dr. Boseman was found lying on the bedroom floor. The receiver of a telephone was found under his body. The fire was noticed by a neighbor, Robert Haddick of 5010 Munger Rd., who looked out a window of his home and saw smoke coming from the doctor's house. An off-duty fireman, Robert T. Crocker, and a fireman Robert Millspaugh Jr. went into the burning house wearing masks. Crocker found the body. Firemen fought the blaze for I 2 hours and 47 minutes. Cause of the fire has not been :; determined. Dr. Boseman, a gradúate of . the U-M medical school, had I served one term on the I ti Human Relations I sion. He was born in Cleveland. Arrangements by Lucille's Funeral Home, Ypsilanti, were incomplete this morning. In another fire yesterday, John Burke, 73, died when he was trapped by flames in the Sellers Sawmill on W. Sanborn '. Rd. in Manchester Township. Mr. Burke was the caretaker -- of the sawmill and attached toolshed. He lived in an l ment in the building. ; The Manchester Fire pj ment answered a cali to the fc 4 mili at about 6 a.m. fS "The building was engulfed in flames by the time we got to H I 1 it and looked like it had been burning for an hour or an hour 1 and a half," said Manchester B Fire Chief James Kensler. W 'He said that 18 men worked B& J for six lours to put out the blaze. The fire is believed to ÏÏM rt have been caied by Mr. Burke WÊ J smoking in bed. '& I Damage is esLnlated to be W,a close to $12,000. =á 3 Mr. Burke is survi.o(1 by a daughter, Mrs. William Riddle i of Rosetown, Ga., and two ns ra Cari and nonald botho. Buchannan, Ky. g X Funeral arrangements have 'i not been made yet.