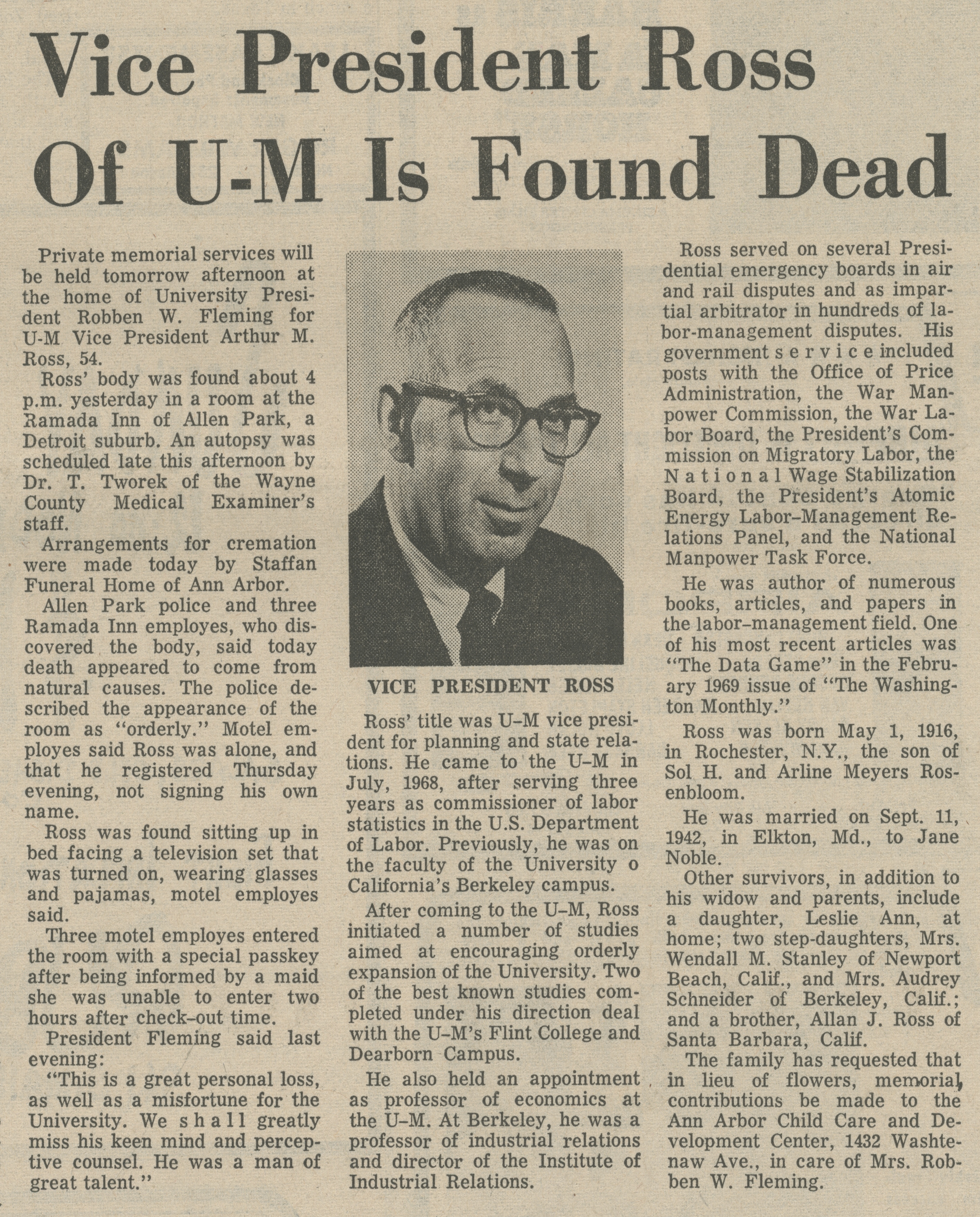 Private memorial services will be held tomorrow afternoon at the home of University President Robben W. Fleming for U-M Vice President Arthur M. Ross, 54. Ross' body was found about 4 p.m. yesterday in a room at the Ramada Inn of Allen Park, a Detroit suburb. An autopsy was scheduled late this afternoon by Dr. T. Tworek of the Wayne County Medical Examiner's staff. Arrangements for cremation were made today by Staffan Funeral Home of Ann Arbor. Allen Park police and three Ramada Inn employes, who discovered the body, said today death appeared to come from natural causes. The police described the appearance of the room as "orderly." Motel employes said Ross was alone, and that he registered Thursday evening, not signing his own name. Ross was found sitting up in bed facing a television set that was turned on, wearing glasses and pajamas, motel employes said. Three motel employes entered the room with a special passkey after being informed by a maid she was unable to enter two hours after check-out time. President Fleming said last evening: "This is a great personal loss, as well as a misfortune for the University. We shall greatly miss his keen mind and perceptive counsel. He was a man of great talent." Ross' title was U-M vice president for planning and state relations. He came to the U-M in July, 1968, after serving three years as commissioner of labor statistics in the U.S. Department of Labor. Previously, he was on the faculty of the University of California's Berkeley campus. After coming to the U-M, Ross initiated a number of studies aimed at encouraging orderly expansion of the University. Two of the best known studies completed under his direction deal with the U-M's Flint College and Dearborn Campus. He also held an appointment as professor of economics at the U-M. At Berkeley, he was a professor of industrial relations and director of the Institute of Industrial Relations. Ross served on several Presidential emergency boards in air and rail disputes and as impartial arbitrator in hundreds of labor-management disputes. His government service included posts with the Office of Price Administration, the War Manpower Commission, the War Labor Board, the President's Commission on Migratory Labor, the National Wage Stabilization Board, the President's Atomic Energy Labor-Management Relations Panel, and the National Manpower Task Force. He was author of numerous books, articles, and papers in the labor-management field. One of his most recent articles was "The Data Game" in the February 1969 issue of "The Washington Monthly." Ross was born May 1, 1916, in Rochester, N.Y., the son of Sol H. and Arline Meyers Rosenbloom. He was married on Sept. 11, 1942, in Elkton, Md., to Jane Noble. Other survivors, in addition to his widow and parents, include a daughter, Leslie Ann, at home; two step-daughters, Mrs. Wendall M. Stanley of Newport Beach, Calif., and Mrs. Audrey Schneider of Berkeley, Calif.; and a brother, Allan J. Ross of Santa Barbara, Calif. The family has requested that in lieu of flowers, memorial contributions be made to the Ann Arbor Child Care and Development Center, 1432 Washtenaw Ave., in care of Mrs. Robben W. Fleming.