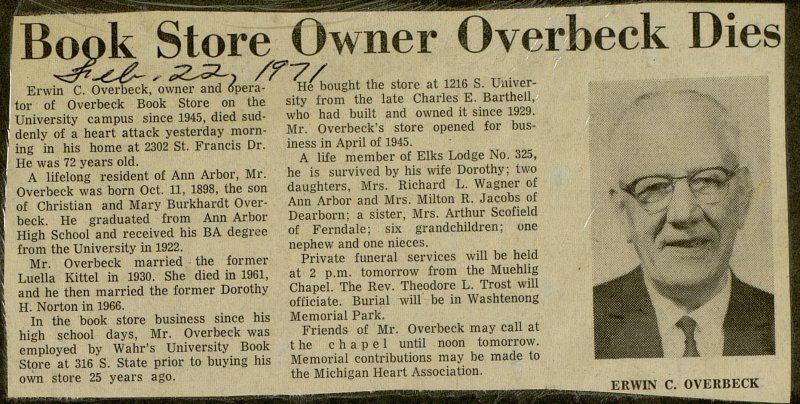 Erwin C. Overbeck, owner and operator of Overbeck Book Store on the University campus since 1945, died suddenly of a heart attack yesterday morning in his home at 2302 St. Francis Dr. He was 72 years old. A lifelong resident of Ann Arbor, Mr. Overbeck was born Oct. 11, 1898, the son of Christian and Mary Burkhardt Overbeck. He graduated from Ann Arbor High School and received his BA degree from the University in 1922. Mr. Overbeck married the former Luella Kittel in 1930. She died in 1961, and he then married the former Dorothy H. Norton in 1966. In the book store business since his high school days, Mr. Overbeck was employed by Wahr's University Book Store at 316 S. State prior to buying his own store 25 years ago. s He bought the store at 1216 S. University from the late Charles E. Barthell, who had built and owned it since 1929. Mr. Overbeck's store opened for business in April of 1945. A life member of Elks Lodge No. 325, he is survived by his wife Dorothy; two daughters, Mrs. Richard L. Wagner of Ann Arbor and Mrs. Milton R. Jacobs of Dearborn; a sister, Mrs. Arthur Scofield of Ferndale; six grandchildren; one nephew and one nieces. Private funeral services will be held at 2 p.m. tomorrow from the Muehlig Chapel. The Rev. Theodore L. Trost will officiate. Burial will be in Washtenong Memorial Park. Friends of Mr. Overbeck may cali at t he chapel until noon tomorrow. Memorial contributions may be made to the Michigan Heart Association.