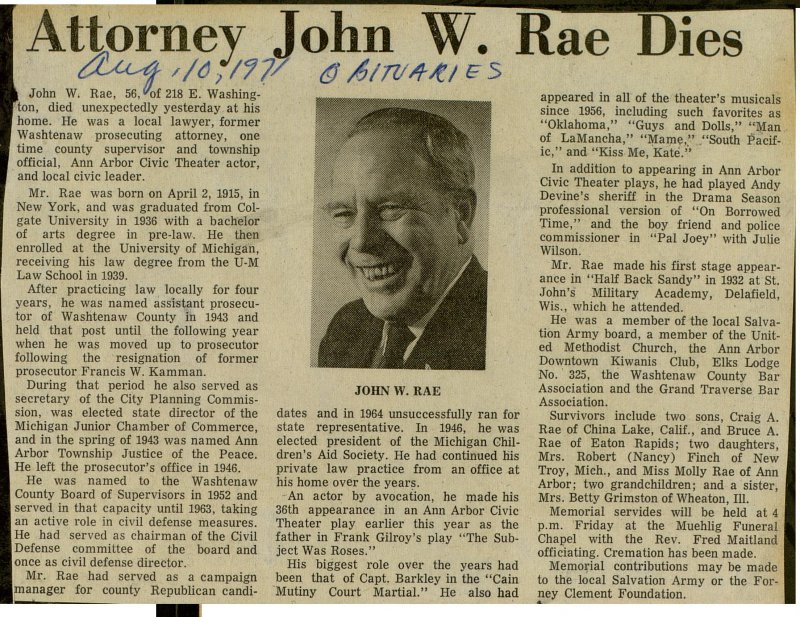 John W. Rae, 56, of 218 E. Washington, died unexpectedly yesterday at his I home. He was a local lawyer, former Washtenaw prosecuting attorney, one f time county supervisor and township ' official, Ann Arbor Civic Theater actor, and local civic leader. Mr. Rae was born on April 2, 1915, in New York, and was graduated from Colgate University in 1936 with a bachelor of arts degree in pre-law. He then enrolled at the University of Michigan, receiving his law degree from the U-M Law School in 1939. After practicing law locally for four years, he was named assistant prosecutor of Washtenaw County in 1943 and held that post until the following year when he was moved up to prosecutor following the resignation of former prosecutor Francis W. Kamman. During that period he also served as secretary of the City Planning Commission, was elected state director of the Michigan Junior Chamber of Commerce, and in the spring of 1943 was named Ann Arbor Township Justice of the Peace. He left the prosecutor's office in 1946. He was named to the Washtenaw County Board of Supervisors in 1952 and served in that capacity until 1963, taking an active role in civil defense measures. He had served as chairman of the Civil Defense committee of the board and once as civil defense director. Mr. Rae had served as a campaign manager for county Republican dates and in 1964 unsuccessfully ran for state representative. In 1946, he was elected president of the Michigan Ghildren's Aid Society. He had continued nis private law practice from an office at his home over the years. -An actor by avocation, he made his 36th appearance in an Ann Arbor Civic Theater play earlier this year as the father in Frank Gilroy's play "The Subject Was Roses." His biggest role over the years had been that of Capt. Barkley in the "Cain Mutiny Court Martial." He also had appeared in all of the theater's musicals since 1956, including such favorites as "Oklahoma," "Guys and Dolls," "Man of LaMancha," "Mame," "South Pacific," and "Kiss Me, Katé." In addition to appearing in Ann Arbor Civic Theater plays, he had played Andy Devine's sheriff in the Drama Season professional version of "On Borrowed Time," and the boy friend and pólice commissioner in "Pal Joey" with Julie Wilson. Mr. Rae made his first stage appearance in "Half Back Sandy" in 1932 at St. John's Military Academy, Delafield, Wis., which he attended. He was a member of the local Salvation Army board, a member of the United Methodist Church, the Ann Arbor Downtown Kiwanis Club, Elks Lodge No. 325, the Washtenaw County Bar Association and the Grand Traverse Bar Association. Survivors include two sons, Craig A. Rae of China Lake, Calif., and Bruce A. Rae of Eaton Rapids; two daughters, Mrs. Robert (Nancy) Finch of New Troy, Mich., and Miss Molly Rae of Ann Arbor; two grandchildren ; and a sister, Mrs. Betty Grimston of Wheaton, 111. Memorial servides will be held at 4 p.m. Friday at the Muehlig Funeral Chapel with the Rev. Fred Maitland officiating. Cremation has been made. Memorial contributions may be made to the local Salvation Army or the Forney Clement Foundation.