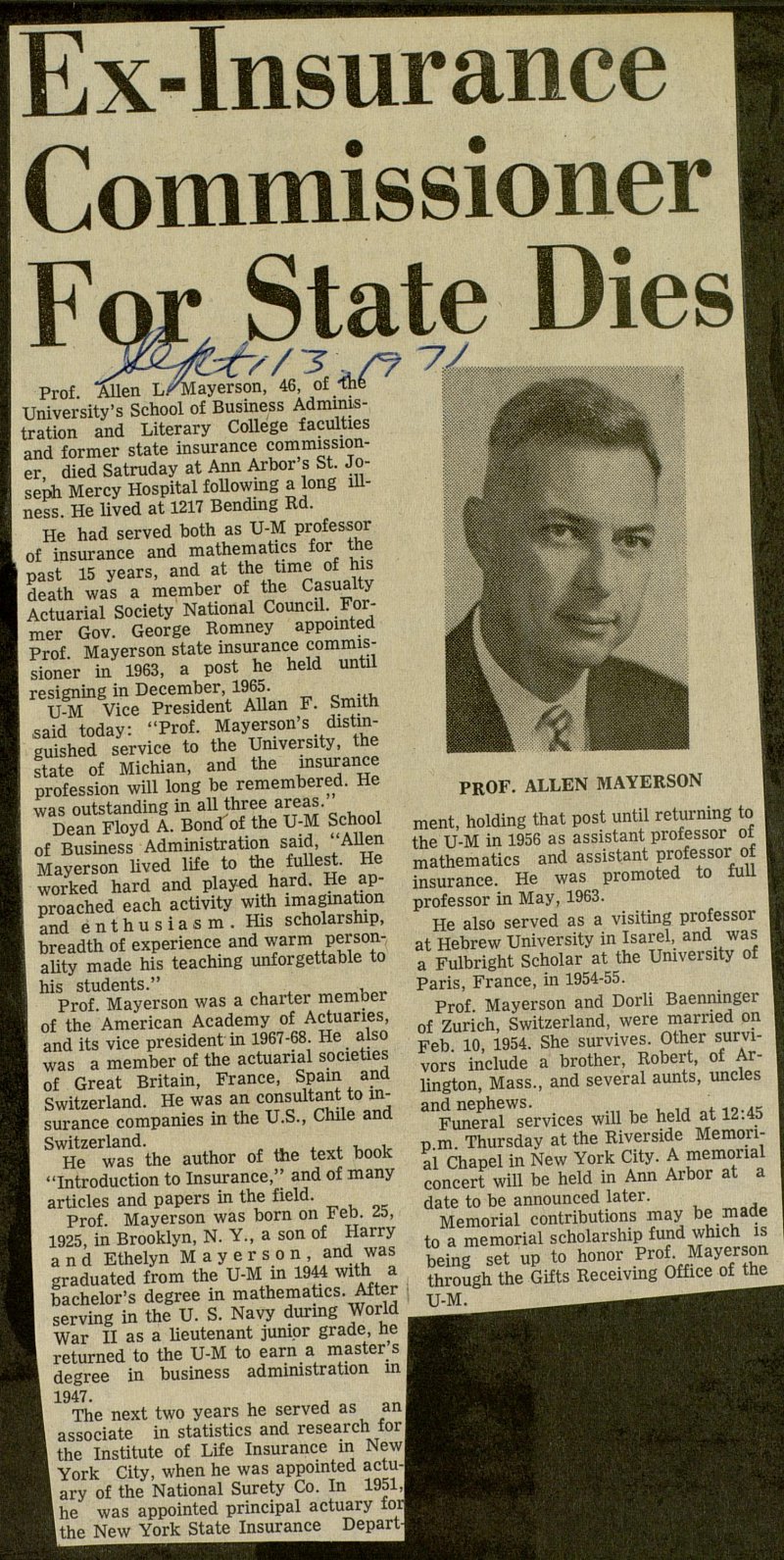 Prof Allen L Mayerson, 46, of thè University's School of Business Admimstration and Literary College faculties and former state insurance commissioner died Satruday at Ann Arbor s St. JosephMercy Hospital foüowing a long ïllness. He lived at 1217 Bending Rd. He had served both as U-M professor I of insurance and mathematics for the I Bast 15 years, and at the time of his Sh was a member of the Casualty I Actuarial Society National Council. Former Gov. George Romney appointed I Prof. Mayerson state insurance commissioner in 1963, a post he held until resigning in December 1965 U-M Vice President Alian F. bmitn I ,said today: "Prof. Mayerson's distinguished service to the Umversity, the I state of Michian, and the insurance profession will long be remembered. He I was outstanding in all three áreas. Dean Floyd A. BondTof the U-M School I of Business Administration said, Allen Mayerson lived life to the fullest. He worked hard and played hard. He apI proached each activity with imagination [ and ent hu s ia, sm. His scholarship, ■ breadth of experience and warm personI ality made his teaching unforgettable to I hlprofU Mayerson was a charter member I of the American Academy of Actuanes, and its vice president in 1967-68. He also I was a member of the actuarial societies I of Great Britain, France, Spain and J Switzerland. He was an consultant to in1 surance companies in the U.S., Chile and Hrwafthe author of the text book I "Introduction to Insurance," and of many articles and papers in the field. Prof Mayerson was bom on Feb. 5, 1925 in Brooklyn, N. Y., a son of Harry and Ethelyn Mayerson, and was ■ graduated f rom the U-M in 1944 with a bachelor's degree in mathematics. After I serving in the U. S. Navy durmg World War II as a lieutenant junior grade, he ■ returned to the U-M to earn a master s degree in business administration in Ê 2.947 ■ The next two years he served as an ■ associate in statistics and research for ■ the Institute of Life Insurance in New ■ York City, when he was appointed actu■ ary of the National Surety Co. In 1951J ■ he was appointed principal actuary forf ■ the New York State Insurance Depart-] ment, holding that post until returmng to I the U-M in 1956 as assistant professor of I mathematics and assistant professor _ of I insurance. He was promoted to full I professor in May, 1963. He also served as a visiting professor at Hebrew University in Isarel, and was a Fulbright Scholar at the University of Paris, Fr anee, in 1954-55. Prof Mayerson and Dorli Baenninger of Zurich, Switzerland, were married on Feb 10, 1954. She survives. Other survivors include a brother, Robert, of Arlington, Mass., and several aunts, úneles anFlePralWsServices will be held at 12:45 pm Thursday at the Riverside Memorial Chapel in New York City. A memorial concert will be held in Ann Arbor at a date to be announced later. Memorial contributions may bemade to a memorial scholarship fund which is being set up to honor Prof. Mayer on through the Gifts Receiving Officeofthe u-m. m