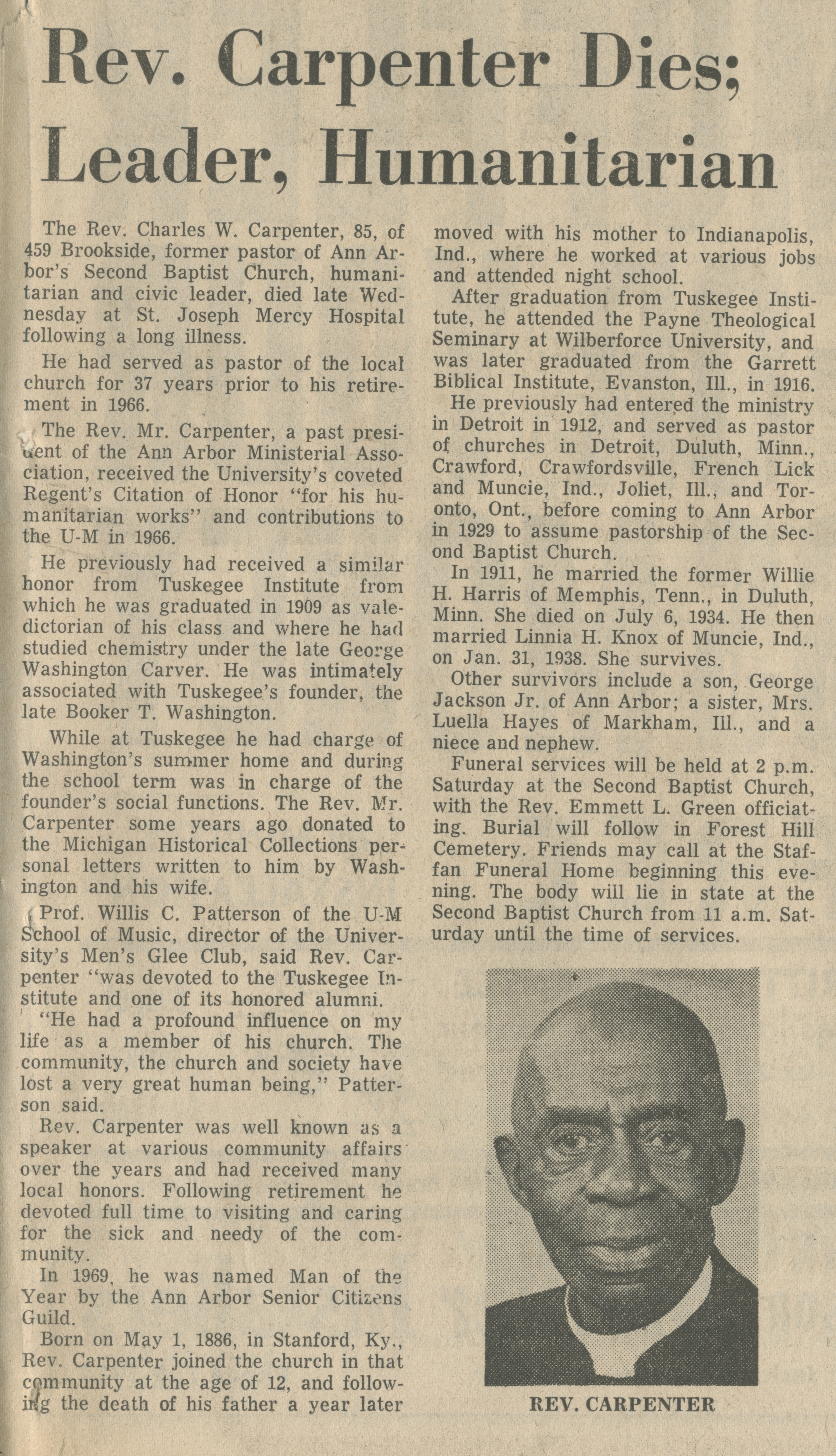 The Rev. Charles W. Carpenter, 85, of 459 Brookside, former pastor of Ann Arbor's Second Baptist Church, humanitarian and civic leader, died late Wednesday at St. Joseph Mercy Hospital following a long illness.
He had served as pastor of the local church for 37 years prior to his retirement in 1966.
The Rev. Mr. Carpenter, a past president of the Ann Arbor Ministerial Association, received the University's coveted Regent's Citation of Honor "for his humanitarian works" and contributions to the U-M in 1966
He previously had received a similar honor from Tuskegee Institute from which he was graduated in 1909 as valedictorian of his class and where he had studied chemistry under the late George Washington Carver. He was intimately associated with Tuskegee's founder, the late Booker T. Washington.
While at Tuskegee he had charge of Washington's summer home and during the school term was in charge of the founder's social functions. The Rev. Mr. Carpenter some years ago donated to the Michigan Historical Collections personal letters written to him by Washington and his wife.
Prof. Willis C. Patterson of the U-M School of Music, director of the University's Men's Glee Club, said Rev. Carpenter "was devoted to the Tuskegee Institute and one of its honored alumni.
"He had a profound influence on my life as a member of his church. The community, the church and society have lost a very great human being," Patterson said.
Rev. Carpenter was well known as a speaker at various community affairs over the years and had received many local honors. Following retirement he devoted full time to visiting and caring for the sick and needy of the community.
In 1969, he was named Man of the Year by the Ann Arbor Senior Citizens Guild.
Born on May 1, 1886, in Stanford, Ky., Rev Carpenter joined the church in that community at the age of 12, and following the death of his father a year later moved with his mother to Indianapolis, Ind., where he worked at various jobs and attended night school.
After graduation from Tuskegee Institute, he attended the Payne Theological Seminary at Wilberforce University, and was later graduated from the Garrett Biblical Institute, Evanston, Ill., in 1916.
He previously had entered the ministry in Detroit in 1912, and served as pastor of churches in Detroit, Duluth, Minn., Crawford, Crawfordsville, French Lick and Muncie, Ind., Joliet, Ill., and Toronto, Ont., before coming to Ann Arbor in 1929 to assume pastorship of the Second Baptist Church.
In 1911, he married the former Willie H. Harris of Memphis, Tenn., in Duluth, Minn. She died on July 6, 1934. He then married Linnia H. Knox of Muncie, Ind., on Jan. 31, 1938. She survives. Other survivors include a son, George Jackson Jr. of Ann Arbor; a sister, Mrs. Luella Hayes of Markham, Ill., and a niece and nephew.
Funeral services will be held at 2 p.m. Saturday at the Second Baptist Church, with the Rev. Emmett L. Green officiating. Burial will follow in Forest Hill Cemetery. Friends may call at the Staffan Funeral Home beginning this evening. The body will lie in state at the Second Baptist Church from 11 a.m. Saturday until the time of services.