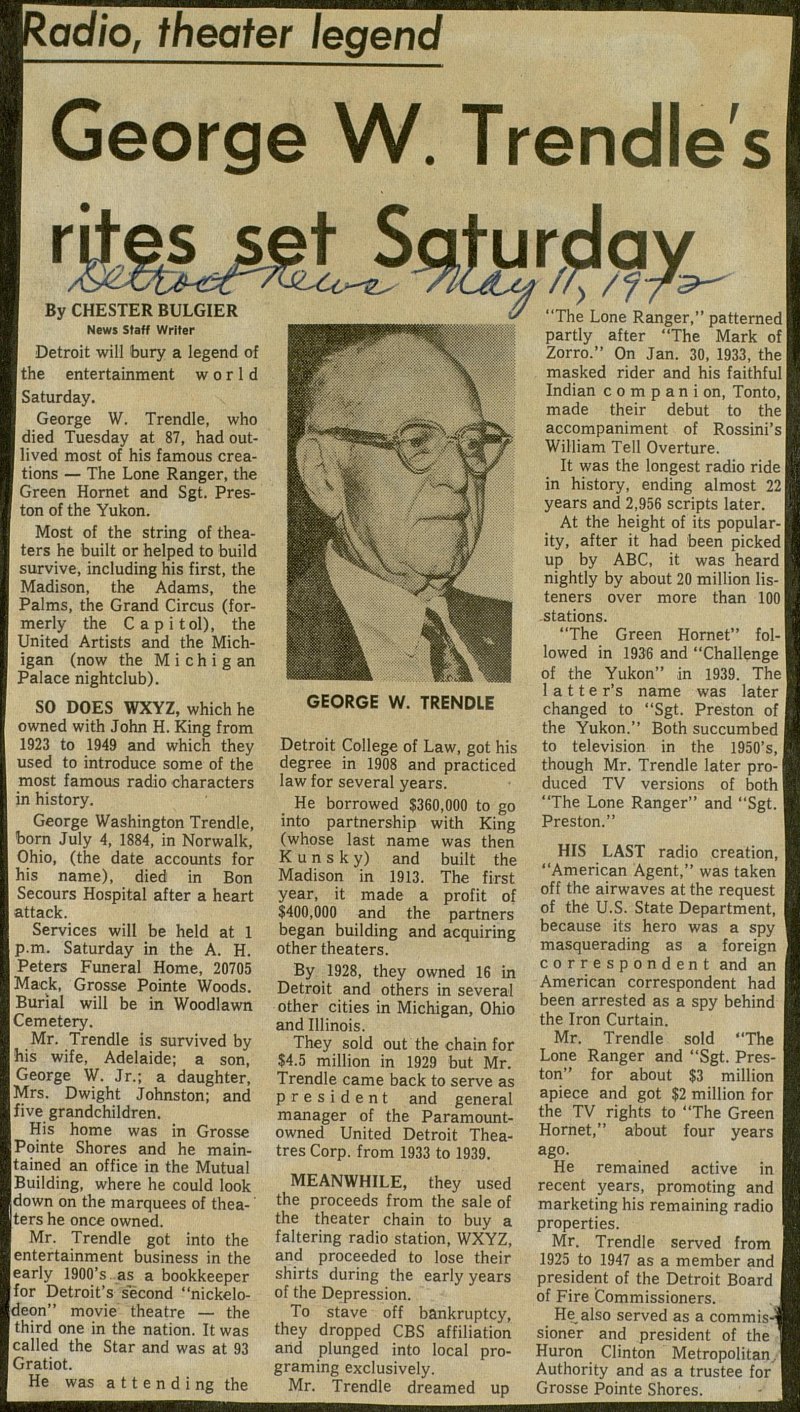 Detroit will bury a legend of I the entertainment w o r 1 d I Saturday. George W. Trendle, who I died Tuesday at 87, had outI lived most of his famous creaI tions - The Lone Ranger, the Green Hornet and Sgt. PresI ton of the Yukon. Most of the string of theaters he built or helped to build survive, including his first, the Madison, the Adams, the Palms, the Grand Circus (formerly the C a p i tol), the United Artists and the Michigan (now the M i c h i g an Palace nightclub). SO DOES WXYZ, which he owned with John H. King from 1923 to 1949 and which they used to introduce some of the most famous radio characters in history. George Washington Trendle, bom July 4, 1884, in Norwalk, Ohio, (the date accounts for his name), died in Bon Secours Hospital after a heart attack. Services will be held at 1 p.m. Saturday in the A. H. Peters Funeral Home, 20705 Mack, Grosse Pointe Woods. Burial will be in Woodlawn Cemetery. Mr. Trendle is survived by his wife, Adelaide; a son, George W. Jr.; a daughter, Mrs. Dwight Johnston; and five grandchildren. His home was in Grosse Pointe Shores and he maintained an office in the Mutual Building, where he could look down on the marquees of theaters he once owned. Mr. Trendle got into the entertainment business in the early 1900's.as a bookkeeper for Detroit's second "nickelodeon" movie theatre - the third one in the nation. It was called the Star and was at 93 Gratiot. He was a 1 1 e n d i ng the Detroit College of Law, got his degree in 1908 and practiced law for several years. He borrowed $360,000 to go into partnership with King (whose last name was then Kunsky) and built the Madison in 1913. The first year, it made a profit of $400,000 and the partners began building and acquiring other theaters. By 1928, they owned 16 in Detroit and others in several other cities in Michigan, Ohio and Illinois. They sold out the chain for $4.5 million in 1929 but Mr. Trendle came back to serve as president and general manager of the Paramountowned United Detroit Theatres Corp. from 1933 to 1939. MEANWHILE, they used the proceeds from the sale of the theater chain to buy a faltering radio station, WXYZ, and proceeded to lose their shirts during the early years of the Depression. To stave off bankruptcy, they dropped CBS affiliation and plunged into local programing exclusively. Mr. Trendle dreamed up ' ' ) ' f f "The Lone Ranger," patterned partly after "The Mark of Zorro." On Jan. 30, 1933, the masked rider and his faithful Indian c o m p a n i on, Tonto, I made their debut to the I accompaniment of Rossini's I William Teil Overture. It was the longest radio ride I in history, ending almost 22 1 years and 2,956 scripts later. At the height of its 1 ity, after it had been pickedl up by ABC, it was heardj nightly by about 20 million 1 teners over more than 100 1 -stations. "The Green Hornet" fol-l lowed in 1936 and "Challenge I of the Yukon" in 1939. Thel 1 a 1 1 e r's name was later I changed to "Sgt. Preston of I the Yukon." Both succumbed I to televisión in the 1950's, I though Mr. Trendle later 1 duced TV versions of bothl "The Lone Ranger" and "Sgt. I Preston." HIS LAST radio creation, I "American Agent," was taken I off the airwaves at the request I of the U.S. State Department, I because its hero was a spy I masquerading as a foreign ] correspondent and an I American correspondent had I been arrested as a spy behind I the Iron Curtain. Mr. Trendle sold "The I Lone Ranger and "Sgt. I ton" for about $3 million I apiece and got $2 million for I the TV rights to "The Green I Hornet," about four years I ago. He remained active in I recent years, promoting and I marketing his remaining radio I properties. I Mr. Trendle served f rom I 1925 to 1947 as a member and I president of the Detroit Board I of Fire Commissioners. He also served as a commisi sioner and president of the ■ Hurón Clinton Metropolitan..! Authority and as a trustee for I Grosse Pointe Shores.