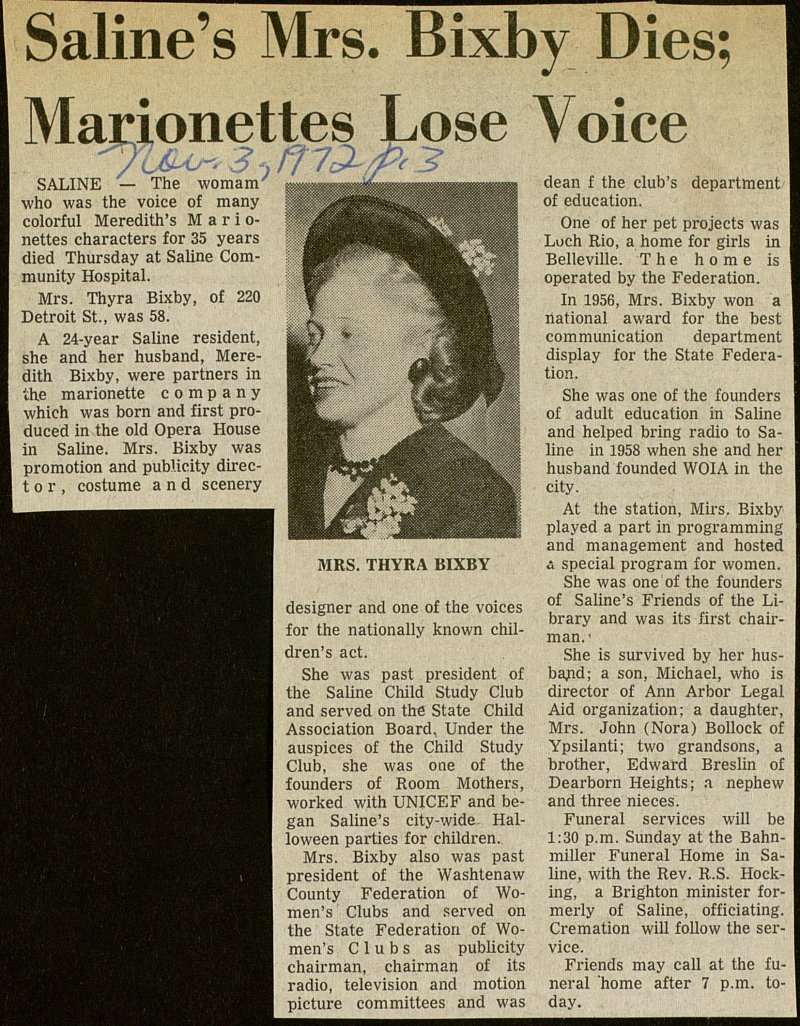 SALINE - The woman who was the voice of many colorful Meredith's Marionettes characters for 35 years died Thursday at Saline Community Hospital. Mrs. Thyra Bixby, of 220 Detroit St., was 58. A 24-year Saline resident, she and her husband, Meredith Bixby, were partners in the marionette c o m p a n y which was born and first produced in the old Opera House 1 in Saline. Mrs. Bixby was promotion and publicity director , costume and scenery designer and one of the voices for the nationally known children's act. She was past president of the Saline Child Study Club and served on the State Child Association Board. Under the auspices of the Child Study Club, she was one of the founders of Room Mothers, worked with UNICEF and began Saline's city-wide Halloween parties for children. Mrs. Bixby also was past president of the Washtenaw County Federation of Women's Clubs and served on the State Federation of Women's Clubs as publicity chairman, chairman of its radio, televisión and motion picture committees and was deán f the club's department of education. One of her pet projects was Loch Rio, a home for girls in Belleville. The home is operated by the Federation. In 1956, Mrs. Bixby won a national award for the best communication department display for the State Federation. She was one of the founders of adult education in Saline and helped bring radio to Saline in 1958 when she and her husband founded WOIA in the city. At the station, Mrs. Bixby played a part in programming and management and hosted & special program for women. She was one of the founders of Saline's Friends of the Library and was its first chairman. She is survived by her husband; a son, Michael, who is director of Ann Arbor Legal Aid organization ; a daughter, Mrs. John (Nora) Bollock of Ypsilanti; two grandsons, a brother, Edward Breslin of Dearborn Heights; a nephew and three nieces. Funeral services will be 1:30 p.m. Sunday at the Bahnmiller Funeral Home in Saline, with the Rev. R.S. Hocking, a Brighton minister formerly of Saline, officiating. Cremation will follow the service. Friends may cali at the funeral 'home after 7 p.m. today.