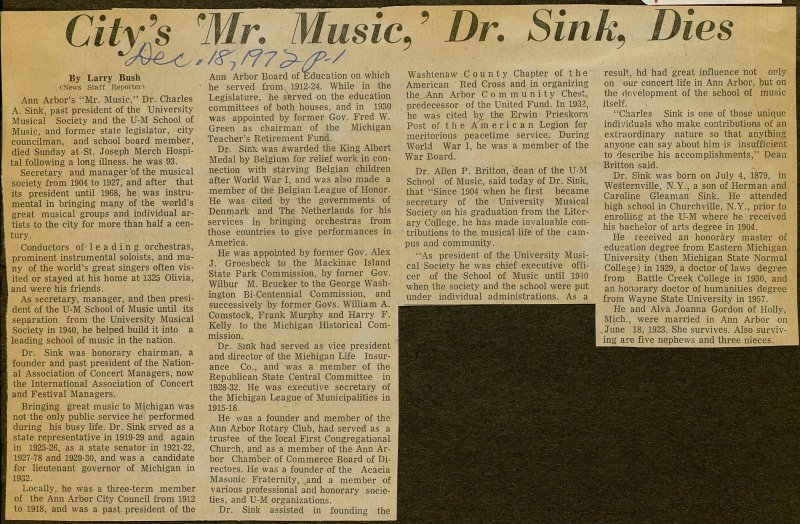 Ann Arbor's "Mr. Music," Dr. Charles A. Sink, past president of the University Musical Society and the U-M School of Music, and former state legislator, city councilman, and school board member, died Sunday at St. Joseph Merch Hospital following a long illness. he was 93. Secretary and manager of the musical society from 1904 to 1927, and after that its president until 1968, he was instrumental in bringing many of the world's great musical groups and individual artists to the city for more than half a century.. Conductors of 1 e a d i n g orchestras, prominent instrumental soloists, and maI ny of the world's great singers often visited or stayed at his home at 1325 Olivia, [and were his friends. As secretary, manager, and then president of the U-M School of Music until its i separation from the University Musical Society in 1940, he helped build it into a leading school of music in the nation. Dr. Sink was honorary chairman, a founder and past president of the Nation[ al Association of Concert Managers, now I the International Association of Concert i and Festival Managers. Bringing great music to Michigan was not the only public service he performed during his busy life. Dr. Sink srved as a state representative in 1919-29 and again in 1925-26, as a state senator in 1921-22, 1927-78 and 1929-30, and was a candidate for lieutenant governor of Michigan in 1932. Locally, he was a three-term member of the Ann Arbor City Council from 1912 to 1918, and was a past president of the Ann Arbor Board of Education on which he served fromx 1912-24. While in the Legislature, he served on the education committees of both houses, and in 1930 , was appointed by former Gov. Fred W. Green as chairman of the Michigan Teacher's Retirement Fund. Dr. Sinï; was áwarded the King Albert Medal by Belgium for relief work in connection with stárving Belgian children after World War I, and was also made a member of the Belgian League of Honor. He was cited by the governments of Denmark and The Netherlands for his services in bringing orchestras from those countries to give performances in America. He was appointed by former Gov. Alex J. Groesbeck to the Mackinac Island State Park Commission, by forner Gov. Wilbur M. Brucker to the George Washington Bi-Centennial Commission, and successively by former Govs. William A. _ Comstock, Frank Murphy and Harry F. I Kelly to the Michigan Historical I mission. Dr. Sink had served as vice president I and director of the Michigan Life I anee Co., and was a member of the I Republican State Central Committee in I 1928-32. He was executive secretary of I the Michigan League of Municipalities in I 1915-18. He was a founder and member of the I Ann Arbor Rotary Club, had served as a I trustee of the local First Congregational I Church, and as a member of the Ann I bor Chamber of Commerce Board of I rectors. He was a founder of the Acacia I Masonic Fraternity, .and a member of I various professional and honorary I ties, and U-M organizations. Dr. Sink assisted in founding the Washtenaw County Chapter of the1 American Red Cross and in organizing the ,Ann Arbor Community Chest, predecessor of the United Fund. In 1932, he was cited by the Erwin Prieskorn Post of the American Legión for meritoriöus peacetime service. During World War I, he was a member of the War Board. Dr. Allen P. Britton, dean of the U-M School of Music, said today of Dr. Sink, that "Since 1904 when he first became secretary of the University Musical Society on his graduation f rom the Literary Cojlege, he has made inyaluable contributions to the musical life of the campus and community. "As president of the University Musical Society he was chief executive officer of the School of Music until 1940 when the society and the school were put under individual administrations. As a result, hd had great influence not oi'ly on our concert life in Ann Arbor, but on the dovelopment of the school of music itself. "Charles Sink is one of those unique individuáis who make contributions of an extraordinary nature so that anything anyone can say about him is insufficient to describe his accomplishments," Dean Britton said. Dr. Sink was bom on July 4, 1879, in Weslern ville, N.Y., a son of Herman and Caroline Gleaman Sink. He attended high school in Churchville, N.Y., prior to enrolling at the U-M where he received his bachelor of arts degree in 1904. He received an honoráry master of education degree from Eastern Michigan University (then Michigan State Normal College) in 1929, a doctor of laws degree frorn Battle Creek College in 1930, and an honorary doctor of humanities degree from Wayne State University in 1957. He and Alvá Joanna Gordon of Holly, Mi,ch., were married in Ann Arbor on ,June 18, 1923. She survives. Also surviving are five nephews and three nieces.