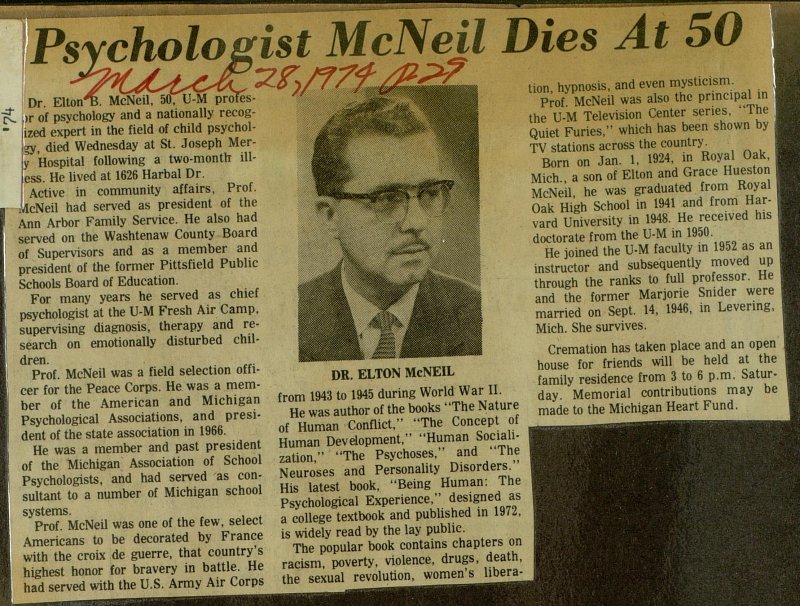 Dr. Elton B. McNeil, 50, U-M professor of psychology and a nationally recognized expert in the field of child psycholU, died Wednesday at St. Joseph Mery Hospital following a two-month illess. He lived at 1626 Harbal Dr. Active in community affairs, Prof. McNeil had served as president of the Ann Arbor Family Service. He also had served on the Washtenaw County Board of Supervisors and as a member and president of the former Pittsfield Public Schools Board of Education. For many years he served as chief psychologist at the U-M Fresh Air Camp, supervising diagnosis, therapy and research on emotionally disturbed children. Prof. McNeil was a field selection offii eer for the Peace Corps. He was a member of the American and Michigan Psychological Associations, and presij dent of the state association in 1966. He was a member and past president of the Michigan Association of School Psychologists, and had served as consultant to a number of Michigan school systems. Prof McNeil was one of the few, select Americans to be decorated by France with the croix de guerre, that country s I highest honor for bravery in battle. He I had served with the U.S. Army Air Corps ■ in from 1943 to 1945 during World War II. He was author of the books "The Nature of Human Conflict," "The Concept of Human Development," "Human Socialization," "The Psychoses," and ' The Neuroses and Personality Disorders. His latest book, "Being Human: The Psychological Experience," designed as a college textbook and published in 1972, is widely read by the lay public. The popular book contains chapters on racism, poverty, violence, drugs, death, the sexual revolution, women's tion hypnosis, and even mysticism. ■ Prof McNeil was also the principal in ■ the U-M Televisión Center series, The I Quiet Furies," which has been shown by 1 TV stations across the country I Born on Jan. 1, 1924, in Royal Oak, I Mich., a son of Elton and Grace Hueston I McNeil, he was graduated from Royal I Oak High School in 1941 and from vard University in 1948. He received his I doctórate from the U-M in 1950. I He joined the U-M faculty in 1952 as an I instructor and subsequently moved up through the ranks to full professor. He and the former Marjorie Snider were married on Sept. 14, 1946, in Levering, Mich. She survives. Cremation has taken place and an open I house for friends will be held at the I family residence from 3 to 6 p.m. I day. Memorial contributions may be I made to the Michigan Heart Fund.