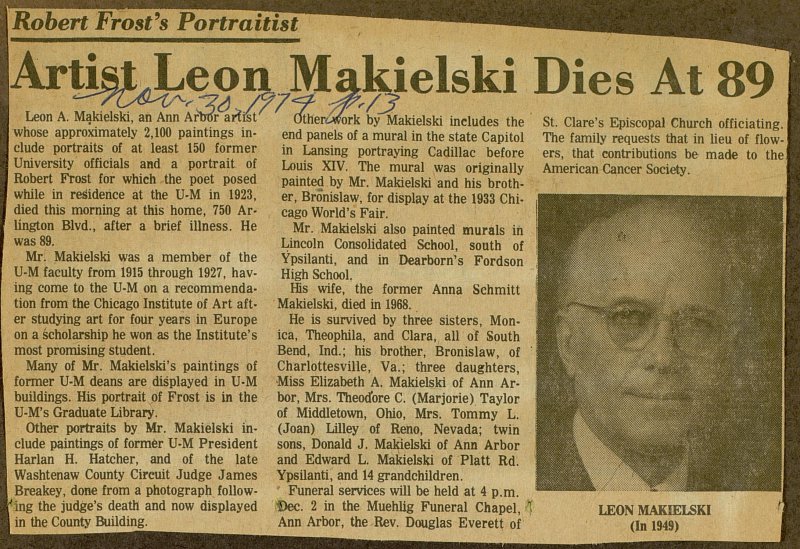 Leon A. Makielski, an Ann Arbor artist whose approximately 2,100 paintings include portraits of at least 150 former University officials and a portrait of ' Robert Frost for which the poet posed while in residence at the U-M in 1923, died this morning at this home, 750 Arlington Blvd., after a brief illness. He was 89. Mr. Makielski was a member of the U-M faculty from 1915 through 1927, having come to the U-M on a recommendation from the Chicago Institute of Art after studying art for four years in Europe on a scholarship he won as the Institute' s most promising student. Many of Mr. Makielski' s paintings of former U-M deans are displayed in U-M buildings. His portrait of Frost is in the U-M's Gradúate Library. Other portraits by Mr. Makielski include paintings of formèr U-M President Harlan H. Hatcher, and of the late Washtenaw County Circuit Judge James Breakey, done from a photograph following the judge's death and now displayed in the County Building. ötherork by Makielski includes the end panels of a mural in the state Capítol in Lansing portraying Cadillac before Louis XIV. The mural was originally painted by Mr. Makielski and his brother, Bronislaw, for display at the 1933 Chicago World's Fair. Mr. Makielski also painted muráis in Lincoln Consolidated School, south of Ypsilanti, and in Dearborn's Fordson High School. His wife, the former Anna Schmitt Makielski, died in 1968. He is survived by three sisters, Monica, Theophila, and Clara, all of South Bend, Ind.; his brother, Brönislaw, of Charlottesville, Va.; three daughters, Miss Elizabeth A. Makielski of Ann Arbor, Mrs. Theodbre C. (Marjorie) Taylor of Middletown, Ohio, Mrs. Tommy L. (Joan) Ldlley of Reno, Nevada; twin sons, Donald J. Makielski of Ann Arbor and Edward L. Makielski of Platt Rd. Ypsilanti, and 14 grandchildren. Funeral services will be held at 4 p.m. Oec. 2 in the Muehlig Funeral Chapel, % Ann Arbor, the.Rev. Douglas Everett of St. Clare's Episcopal Church officiating. I The family requests that in lieu of flowers, that contributions be made to the American Cáncer Society.