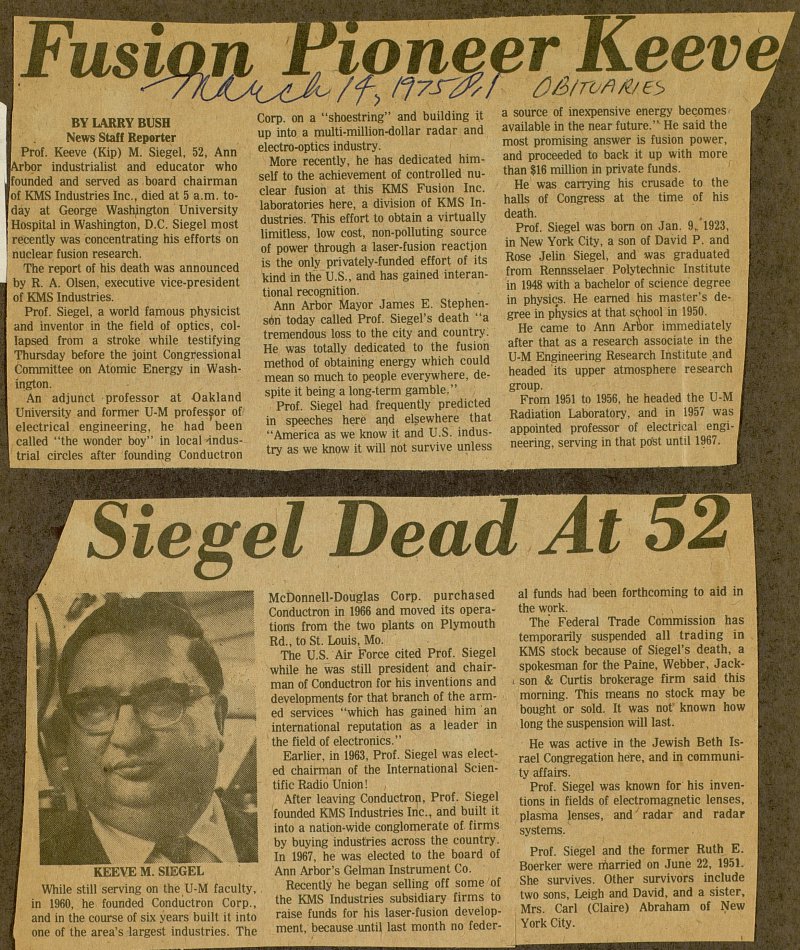 I Prof. Keeve (Kip) M. Siegel, 52, Ann lArbor industrialist and educator who Ifounded and served as board chairman lof KMS Industries Inc., died at 5 a.m. todáy at George Washington University Hospital in Washington, D.C. Siegel most recently was concentrating his efforts on nuclear fusión research. The report of his death was announced by R. A. Olsen, executive vice-president of KMS Industries. Prof. Siegel, a world famous physicist and inventor in the field of opties, collapsed from a stroke while testifying Thursday before the joint Congressional Committee on Atomic Energy in Washington. An adjunct professor at Oakland University and former U-M professor of electrical engineering, he had been called "the wonder boy" in local indusI trial circles after founding Conductron Corp. on a "shoestring" and building it up into a multi-million-dollar radar and electro-optics industry. More recently, he has dedicated himself to the achievement of controlled nuclear fusión at this KMS Fusión Inc. laboratories here, a división of KMS Industries. This effort to obtain a virtually limitless, low cost, non-polluting source of power through a laser-fusion reaction is the only privately-funded effort of its kind in thYU.S., and has gained interantional recognition. Ann Arbor Mayor James E. Stephensón today called Prof. Siegel's death "a tremendous loss to the city and country: He was totally dedicated to the fusión method of obtaining energy which could mean so much to people everywhere, despite it being a long-term gamble." Prof. Siegel had frequently predicted in speeches here and elsewhere that "America as we know it and U.S. industry as we know it will not survive unless a source of inexpensive energy beQomeS' 4 available in the near future." He said the most promising answer is fusión power, and proceeded to back it up with more than $16 million in private funds. He was carrying his crusade to the halls of Congress at the time of his death. Prof. Siegel was born on Jan. 9„ 1923, in New York City, a son of David P. and Rose Jelin Siegel, and was graduated from Rennsselaer Polytechnic Institute in 1948 with a bachelor of science degree in physics. He earned his master's degree in physics at that school in 1950. He carne to Ann Arbor immediately ■ after that as a research associate in the H U-M Engineering Research Institute and I headed its upper atmosphere research H group. m From 1951 to 1956, he headed the U-M I Radiation Laboratory, and in 1957 was ■ appointed professor of electrical engi-M neering, serving in that po'st until 1967. M While still serving on the U-M faculty, , in 1960, he founded Conductron Corp., and in the course of six years built it into one of the area's largest industries. The VIcDonnell-Douglas Corp. purchased :onductron in 1966 and moved its opera:ions from the two plants on Plymouth Rd., to St. Louis, Mo. The U.S. Air Force cited Prof. Siegel while he was still president and chairman of Conductron for his inventions and developments for that branch of the armed services "which has gained him an international reputation as a leader in the field of electronics." Earlier, in 1963, Prof. Siegel was elected chairman of the International Scientific Radio Union! After leaving Conductron, Prof. Siegel founded KMS Industries Inc., and built it into a nationwide conglomérate of firms by buying industries across the country. In 1967, he was elected to the board of Ann Arbor's Gelman Instrument Co. Recently he began selling off some of the KMS Industries subsidiary firms to raise funds for his laser-fusion development, because until last month no al funds had been forthcoming to aid in the work. i The Federal Trade Commission has temporarily suspended all trading in I KMS stock because of Siegel's death, a J spokesman for the Paine, Webber, Jacki son & Curtís brokerage firm said this morning. This means no stock may be I bought or sold. It was not known how long the suspension will last. He was active in the Jewish Beth Israel Congregation hëre, and in community affairs. Prof. Siegel was known for his inventions in fields of electromagnetic lenses, I plasma lenses, and ; radar and radar systems. Prof. Siegel and the former Ruth E. Boerker were rnarried on June 22, 1951. She survives. Other survivors include two sons, Leigh and David, and a sister, Mrs. Cari (Claire) Abraham of New I York City.