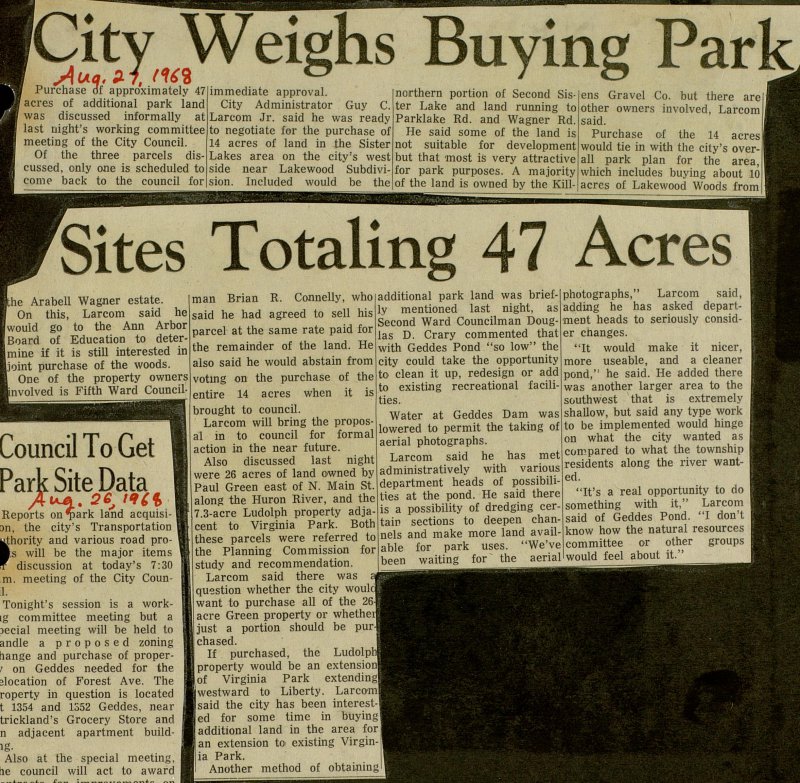 Purchase of approximately 47 acres of additional park land was discussed informally at last night's working committee meeting of the City Council. Of the three pareéis discussed, only one is scheduled to come back to the council for immediate approval. City Administrator Guy C. Larcom Jr. said he was ready to negotiate for the purchase of 14 acres of land in the Sister Lakes area on the city's west side near Lakewood Subdivisión. Included would be the northern portion of Second Sister Lake and land running to Parklake Rd. and Wagner Rd. He said some of the land is not suitable for development but that most is very attractive for park purposes. A majority of the land is owned by the ens Gravel Co. but there arel other owners involved, Larcom I said. Piirchase of the 14 acresl would tie in with the city's over-l all park plan for the area, which includes buying about 10 acres of Lakewood Woods from the Arabell Wagner estáte. On this, Larcom said he would go to the Ann Arbor Board of Education to determine if it is still interested in joint purchase of the woods. , One of the property owners involved is Fifth Ward man Brian R. Connelly, who said he had agreed to sell his parcel at the same rate paid for the remainder of the land. He also said he would abstain from voting on the purchase of the entire 14 acres when it is brought to council. Larcom will bring the proposal in to council for formal action in the near future. Also discussed last night were 26 acres of land owned by Paul Green east of N. Main St. along the Hurón River, and the 7.3-acre Ludolph property adjacent to Virginia Park. Both these pareéis were referred to the Planning Commission for study and recommendation. Larcom said there was a question whether the city woulcl i want to purchase all of the 26l acre Green property or whetheij just a portion should be pur-l chased. If purchased, the Ludolph I property would be an extensión lof Virginia Park extending jwestward to Liberty. Larcom I said the city has been interestled for some time in buying ladditíonal land in the área for lan extensión ü existing Virginia Park. Another method of obtaining additional park land was briefy mentioned last night, as Second Ward Councilman Dougas D. Crary commented that with Geddes Pond "so low" the city could take the opportunity to clean it up, redesign or add to existing recreational facilities. Water at Geddes Dam was lowered to permit the taking of aerial photographs. Larcom said he has met administratively with various department heads of possibilities at the pond. He said there is a possibility of dredging certain sections to deepen channels and make more land available for park uses. "We've hppti waitine for the aerial íhotographs," Larcom said, idding he has asked departmeDt heads to seriously consid;r changes. "It would make it nicer, more useable, and a cleaner pond,'' he said. He added there ivas another larger área to the southwest that is extremely shallow, but said any type work to be implemented would hinge m what the city wanted as compared to what the township residents along the river wanted. "It's a real opportunity to do something with it," Larcom said of Geddes Pond. "I don't know how the natural resources committee or other groups would feel about it."