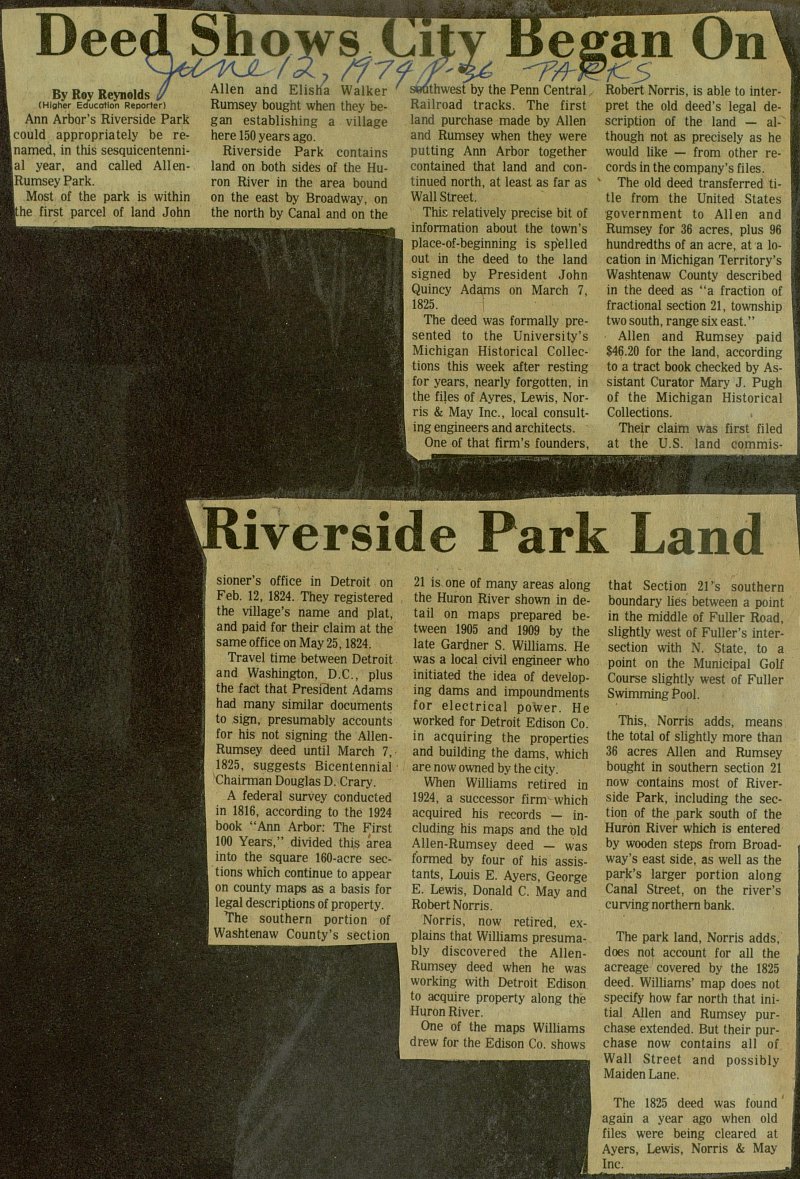 Ann Arbor’s Riverside Park could appropriately be renamed, in this sesquicentennial year, and called Allen-Rumsey Park. Most of the park is within the first parcel of land John Allen and Elisha Walker Rumsey bought when they began establishing a village here 150 years ago. Riverside Park contains land on both sides of the Huron River in the area bound on the east by Broadway, on the north by Canal and on the southwest by the Penn Central Railroad tracks. The first land purchase made by Allen and Rumsey when they were putting Ann Arbor together contained that land and continued north, at least as far as Wall Street. This relatively precise bit of information about the town’s place-of-beginning is spelled out in the deed to the land signed by President John Quincy Adams on March 7, 1825. The deed was formally presented to the University's Michigan Historical Collections this week after resting for years, nearly forgotten, in the files of Ayres, Lewis, Norris & May Inc., local consulting engineers and architects. One of that firm’s founders, Robert Norris, is able to interpret the old deed’s legal description of the land - although not as precisely as he would like - from other records in the company’s files. The old deed transferred title from the United States government to Allen and Rumsey for 36 acres, plus 96 hundredths of an acre, at a location in Michigan Territory’s Washtenaw County described in the deed as "a fraction of fractional section 21, township two south, range six east." Allen and Rumsey paid $46.20 for the land, according to a tract book checked by Assistant Curator Mary J. Pugh of the Michigan Historical Collections. Their claim was first filed at the U.S. land commissioner’s office in Detroit on Feb. 12, 1824. They registered the village’s name and plat, and paid for their claim at the same office on May 25, 1824. Travel time between Detroit and Washington, D.C., plus the fact that President Adams had many similar documents to sign, presumably accounts for his not signing the Allen - Rumsey deed until March 7, 1825, suggests Bicentennial Chairman Douglas D. Crary. A federal survey conducted in 1816, according to the 1924 book "Ann Arbor: The First 100 Years," divided this area into the square 160-acre sections which continue to appear on county maps as a basis for legal descriptions of property. The southern portion of Washtenaw County’s section 21 is one of many areas along the Huron River shown in detail on maps prepared between 1905 and 1909 by the late Gardner S. Williams. He was a local civil engineer who initiated the idea of developing dams and impoundments for electrical power. He worked for Detroit Edison Co. in acquiring the properties and building the dams, which are now owned by the city. When Williams retired in 1924, a successor firm which acquired his records - including his maps and the old Allen-Rumsey deed - was formed by four of his assistants, Louis E. Ayers, George E. Lewis, Donald C. May and Robert Norris. Norris, now retired, explains that Williams presumably discovered the Allen-Rumsey deed when he was working with Detroit Edison to acquire property along the Huron River. One of the maps Williams drew for the Edison Co. shows that Section 21’s southern boundary lies between a point in the middle of Fuller Road, slightly west of Fuller’s intersection with N. State, to a point on the Municipal Golf Course slightly west of Fuller Swimming Pool. This, Norris adds, means the total of slightly more than 36 acres Allen and Rumsey bought in southern section 21 now contains most of Riverside Park, including the section of the park south of the Huron River which is entered by wooden steps from Broadway’s east side, as well as the park’s larger portion along Canal Street, on the river’s curving northern bank. The park land, Norris adds, does not account for all the acreage covered by the 1825 deed. Williams’ map does not specify how far north that initial Allen and Rumsey purchase extended. But their purchase now contains all of Wall Street and possibly Maiden Lane. The 1825 deed was found again a year ago when old files were being cleared at Ayers, Lewis, Norris & May Inc.