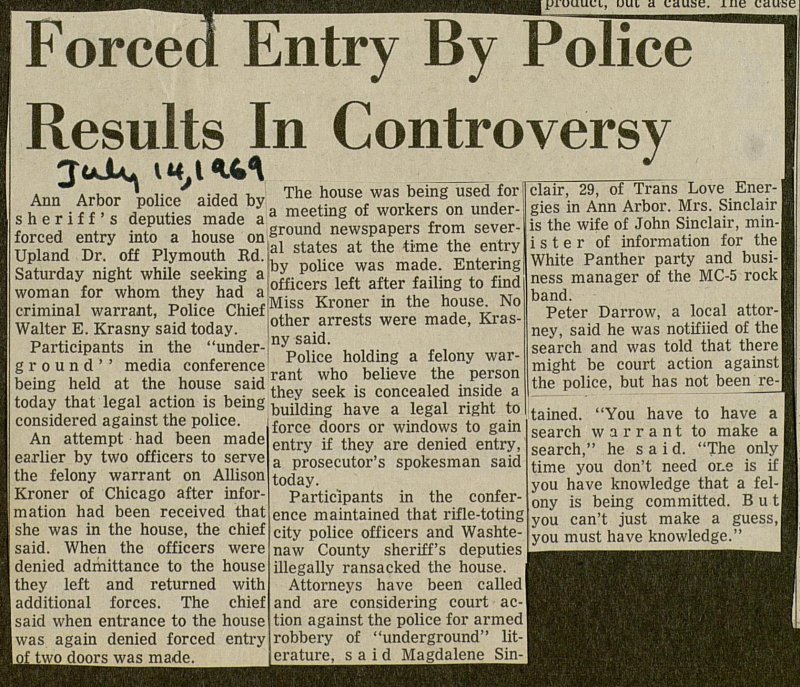 Ann Arbor pólice aided by sheriff's deputies made a forced entry into a house on Upland Dr. off Plymouth Rd. Saturday night white seeking a woman for whom they had a criminal warrant, Pólice Chief Walter E. Krasny said today. Participants in the "underground ' ' media conference being held at the house said today that legal action is being considered against the pólice. An attempt had been made earlier by two officers to serve the felony warrant on Allison Kroner of Chicago after information had been received that she was in the house, the chief said. When the officers were denied admittance to the house they left and returned with ladditional forces. The chief said when entrance to the house was again denied forced entry Loi_two doors was made. The house was being used for a meeting of workers on underground newspapers from several states at the time the entry by pólice was made. Entering officers left after failing to find Miss Kroner in the house. No other arrests were made, Krasny said. Pólice holding a felony warrant who believe the person they seek is concealed inside a building have a legal right to force doors or windows to gain entry if they are denied entry, a prosecutor's spokesman said today. Particïpants in the conference maintained that rifle-toting city pólice officers and Washtenaw County sheriff's deputies illegally ransacked the house. J Attorneys have been calledl and are considering court ac-l tion against the pólice for armed I robbery of "underground" lit-l erature, said Magdalene 1 clair, 29, of Trans Love Energies in Ann Arbor. Mrs. Sinclair is the wife of John Sinclair, mini s t e r of information for the White Panther party and business manager of the MC-5 rock band. Peter Darrow, a local attorney, said he was notifiied of the search and was told that there might be court action against the pólice, but has not been retained. "You have to have a I search warrant to make a I search," he said. "The only I time you don't need or.e is iL I you have knowledge that a fel-l ony is being committed. B u tl you can't just make a guess.l you must have knowledge."