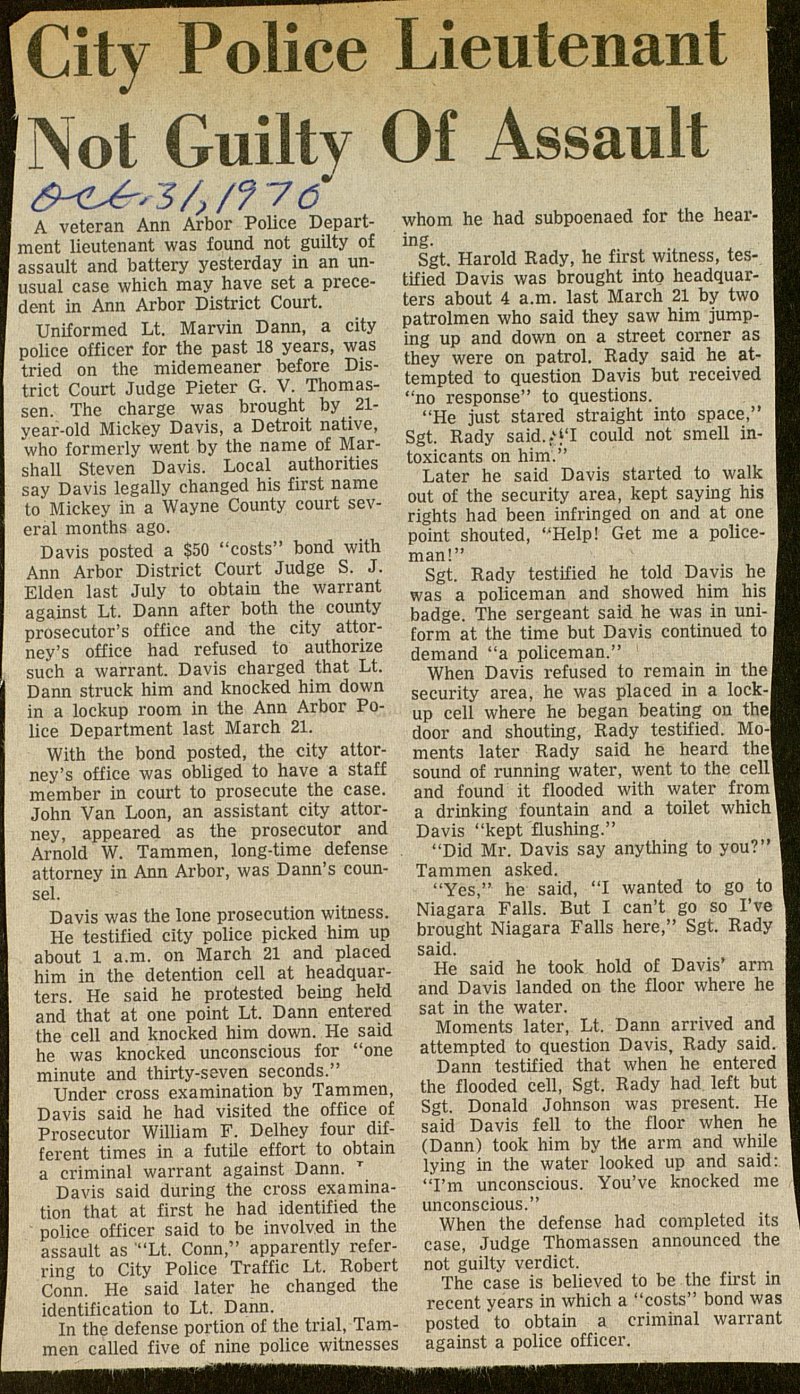 A veteran Ann Arbor Pólice Department lieutenant was iound not guilty of assault and battery yesterday in an unusual case which may have set a precedent in Ann Arbor District Court. Uniformed Lt. Marvin Dann, a city pólice officer for the past 18 years, was tried on the midemeaner before District Court Judge Pieter G. V. Thomassen. The charge was brought by 21 year-old Mickey Davis, a Detroit native, who formerly went by the name of Marshall Steven Davis. Local authorities say Davis legally changed his first name to Mickey in a Wayne County court several months ago. Davis posted a $50 "costs" bond with Ann Arbor District Court Judge S. J. Elden last July to obtain the warrant against Lt. Dann after both the county prosecutor's office and the city attorney's office had refused to authorize such a warrant. Davis charged that Lt. Dann struck him and knoeked him down in a lockup room in the Ann Arbor Police Department last March 21. With the bond posted, the city attorney's office was obliged to have a staff member in court to prosecute the case. John Van Loon, an assistant city attorney, appeared as the prosecutor and Arnold W. Tammen, long-time defense attorney in Ann Arbor, was Dann's counsel. Davis was the Ione prosecution witness. He testified city pólice picked him up about 1 a.m. on March 21 and placed him in the detention cell at headquarters. He said he protested being held and that at one point Lt. Dann entered the cell and knocked him down. He said he was knocked unconscious for "one minute and thirty-seven seconds." Under cross examination by Tammen, Davis said he had visited the office of Prosecutor William F. Delhey four different times in a futile effort to obtain a criminal warrant against Dann. T Davis said during the cross examination that at first he had identified the pol ice officer said to be involved in the assault as '"Lt. Conn," apparently referring to City Pólice Traffic Lt. Robert Conn. He said later he changed the identification to Lt. Dann. In the defense portion of the trial, Tammen called five of nine pólice witnesses whom he had subpoenaed for the I ing. Sgt. Harold Rady, he first witness, I tified Davis was brought into I ters about 4 a.m. last March 21 by two I patrolmen who said they saw him I ing up and down on a street corner as I they were on patrol. Rady said he I tempted to question Davis but received I "no response" to questions. "He just stared straight into space," Sgt. Rady said.-'I could not smell intoxicants on him." Later he said Davis started to walk out of the security area, kept saying his rights had been infringed on and at one point shouted, "Help! Get me a policeman!" Sgt. Rady testified he told Davis he was a policeman and showed him his I badge. The sergeant said he was in 1 form at the time but Davis continued to demand "a policeman." When Davis refused to remain in thel security area, he was placed in a lock-up cell where he began beating on the door and shouting, Rady testified. Moments later Rady said he heard the sound of running water, went to the cell and found it flooded with water from a drinking fountain and a toilet which Davis "kept flushing." 1 "Did Mr. Davis say anything to you?" Tammen asked. "Yes," he said, "I wanted to go to I Niágara Falls. But I can't go so I've ] brought Niágara Falls here," Sgt. Rady said. He said he took hold of Davis' arm and Davis landed on the floor where he sat in the water. Moments later, Lt. Dann arrived and attempted to question Davis, Rady said. Dann testified that when he entered the flooded cell, Sgt. Rady had left but Sgt. Donald Johnson was present. He said Davis feil to the floor when he (Dann) took him by the arm and while lying in the water looked up and said: "I'm unconscious. You've knocked me unconscious." When the defense had eompleted its case, Judge Thomassen announced the not guilty verdict. The case is believed to be the first in recent years in which a "costs" bond was posted to obtain a criminal warrant against a pólice officer.