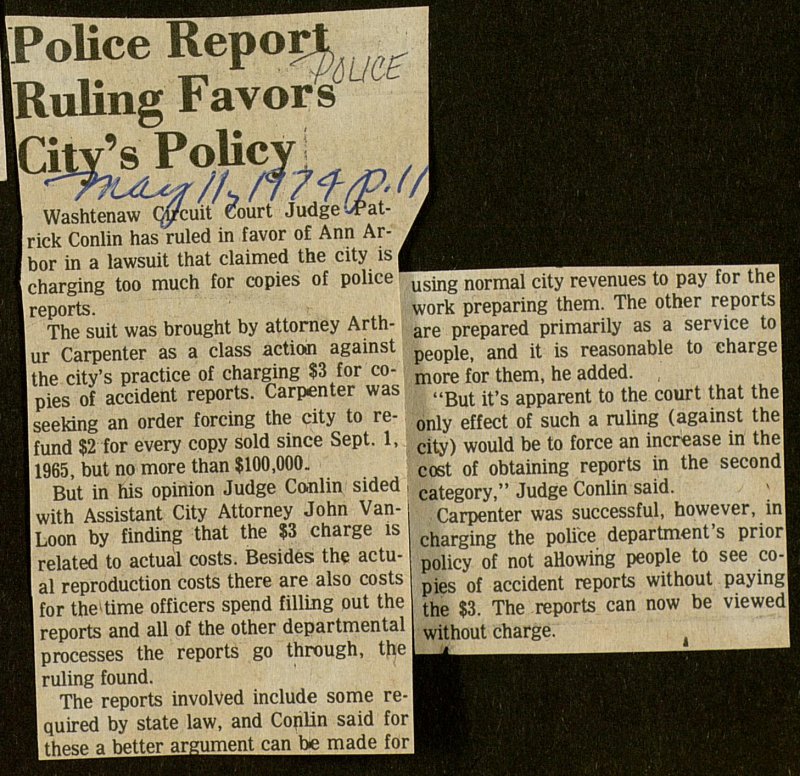 Washtenaw qp'cuit Court Judge OPatrick Conlin has ruled in favor of Ann , bor in a lawsuit that claimed the city is charging too much for copies of pólice reports. The suit was brought by attorney Artnur Carpenter as a class action against the city's practice of charging $3 for copies of accident reports. Carpenter was seeking an order forcing the city to refund $2 for every copy sold since Sept. 1, 1965, but no more than $100,000. But in his opinión Judge Conlin sided with Assistant City Attorney John VanLoon by finding that the $3 charge is related to actual costs. Besides the actual reproduction costs there are also costs I for the'time officers spend filling out the I reports and all of the other departmental Iprocesses the reports go through, the I ruling found. The reports involved include some reI quired by state law, and Conlin said for I these a better_irumejian_bejnadejor using normal city revenues to pay for thel work preparing them. The other reporte I are prepared primarily as a service tol people, and it is reasonable to ehargel more for them, he added. , "But it's apparent to the court that thel ónly effect of such a ruling (against thel city) would be to forcé an increase in thel cost of obtaining reports in the second category," Judge Conlin said. Carpenter was successful, however, in charging the pólice department's prior policy of not aHowihg people to see copies of accident reports without paying the $3. The reports can now be viewed without charge.