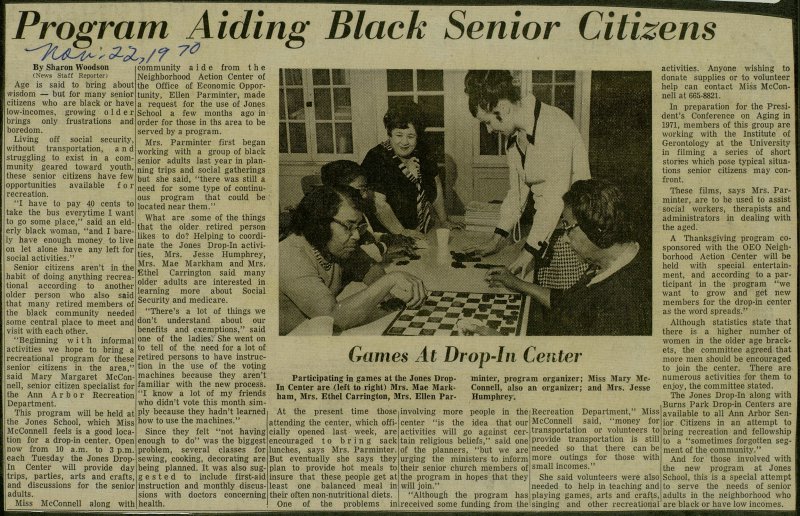 Age is said to bring about wisdom - but for many senior citizens who are black or have low-incomes, growing older brings only frustrations and boredom. Living off social security, without transportation, and struggling to exist in a community geared toward youth, these senior citizens have few opportunities available for recreation. "I have to pay 40 cents to take the bus everytime I want to go some place," said an elderly black woman, "and I barely have enough money to live on let alone have any left for social activities." Senior citizens aren't in the habit of doing anything recreational according to another older person who also said that many retired members of the black community needed some central place to meet and visit with each other. "Beginning with informal activities we hope to bring a recreational program for these senior citizens in the area," said Mary Margaret McConnell, senior citizen specialist for the Ann A r b o r Recreation Department. This program will be held at the Jones School, which Miss McConnell feels is a good location for a drop-in center. Open now from 10 a.m. to 3 p.m. each Tuesday the Jones DropIn Center will provide day trips, parties, arts and crafts, and discussions for the senior adults. Miss McConnell along with community a i d e from the Neighborhood Action Center of the Office of Economie Opportunity, Ellen Parminter, made a request for the use of Jones School a few months ago in order for those in ths área to be served by a program. Mrs. Parminter first began working with a group of black senior adults last year in planning trips and social gatherings but she said, "there was still a need for some type of continuous program that could be located near them." What are some of the things that the older retired person likes to do? Helping to coordínate the Jones Drop-In activities, Mrs. Jesse Humphrey, Mrs. Mae Markham and Mrs. Ethel Carrington said many older adults are interested in learning more about Social Security and medicare. "There's a lot of things we don't understand about our benefits and exemptions," said one of the ladiesV She went on to teil of the need for a lot of retired persons to have instruction in the use of the voting machines because they aren't familiar with the new process. "I know a lot of my friends who didn't vote this month simply because they hadn't learned how to use the machines." Since they feit "not having enough to do" was the biggest problem, several classes for sewing, cooking, decorating are being planned. It was also sugg e s t e d to include first-aid instruction and monthly discussions with doctors concerning health. At the present time those attending the center, which officially opened last week, are encouraged t o b r i n g sack lunches, says Mrs. Parminter. But eventually she says they plan to provide hot meals to insure that these people get at least one balanced meal in their of ten non-nutritional diets. One of the problems in involving more people in the center "is the idea that our activities will go against certain religious beliefs," said one of the planners, "but we are urging the ministers to inform their senior church members of the program in hopes that they will join." "Although the program has received some funding from the Recreation Department," Miss McConnell said, "money for transportation or volunteers to provide transportation is still needed so that there can be more outings for those with small incomes." She said volunteers were also needed to help in teaching and playing games, arts and crafts, singing and other recreational activities. Anyone wishing to dónate supplies or to volunteer help can contact Miss McConnell at 665-8821. In preparation for the President's Conference on Aging in 1971, members of this group are working with the Institute of Gerontology at the University in filming a series of short stories which pose typical situations senior citizens may confront. These films, says Mrs. Parminter, are to be used to assist social workers, therapists and administrators in dealing with the aged. A Thanksgiving program cosponsored with the OEO Neighborhood Action Center will be held with special entertainment, and according to a participant in the program "we want to grow and get new members for the drop-in center as the word spreads." Although statistics state that there is a higher number of women in the older age brackets, the committee agreed that more men should be encouraged to join the center. There are numerous activities for them to enjoy, the committee stated. The Jones Drop-In along with Burns Park Drop-in Centers are available to all Ann Arbor Senior Citizens in an attempt to bring recreation and fellowship to a "sometimes forgotten segment of the community." And for those involved with the new program at Jones School, this is a special attempt to serve the needs of senior adults in the neighborhood who are black or have low incomes.