Peace Symbol 'explanations' Touch Off A War Of Words 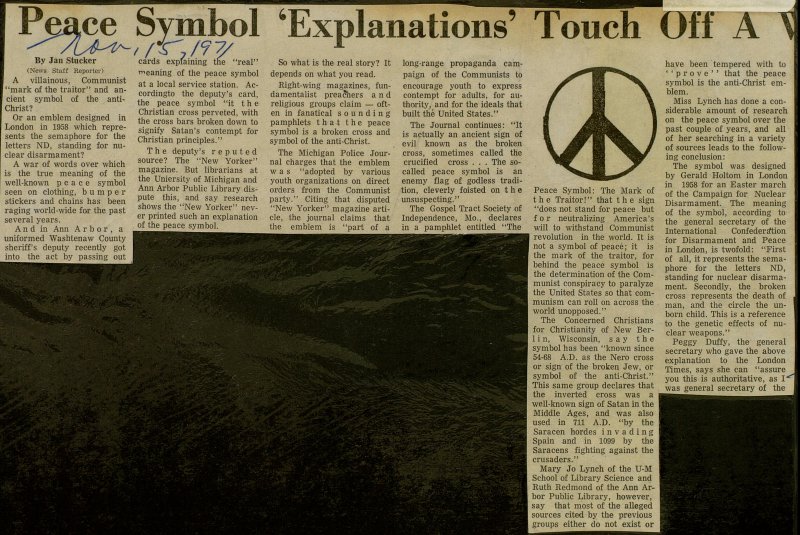 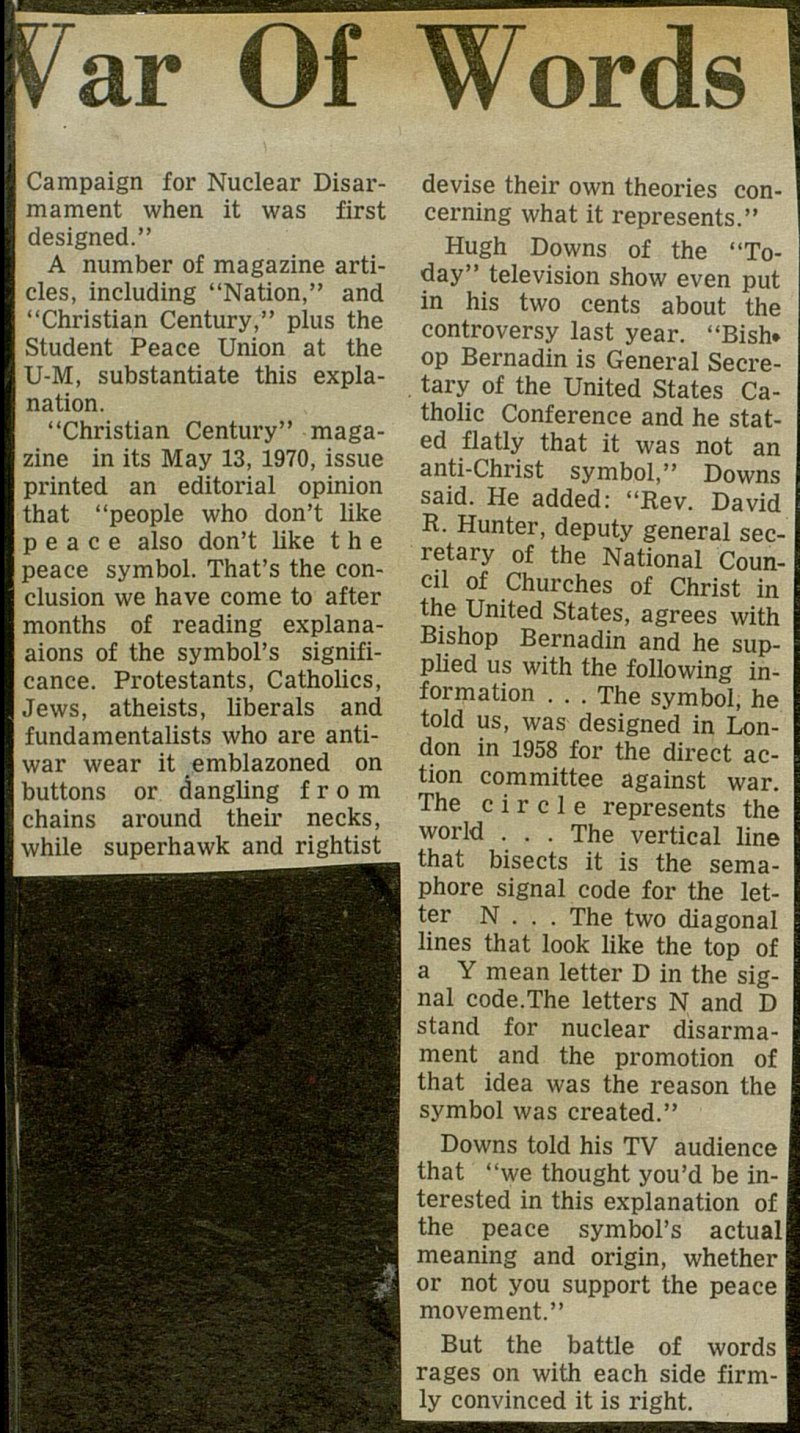 A villainous, Communist "mark of the traitor" and ancient symbol of the antiChrist? Or an emblem designed in London in 1958 which represents the semaphore for the letters ND, standing for nuclear disarmament? A war of words over which is the true meaning of the well-known p e a c e symbol seen on clothing, bumper stickers and chains has been raging world-wide for the past several years. A n d in Ann Arbor, a uniformed Washtenaw County sheriff's deputy recently got into the act by passing out caras expiaining the "real" reaning of the peace symbol at a local service station. Accordingto the deputy's card, the peace symbol "it the Christian cross perveted, with the cross bars broken down to signify Satan's contempt for Christian principies." The deputy's r e p u t e d source? The "New Yorker" magazine. But librarians at the Uniersity of Michigan and Ann Arbor Public Library dispute this, and say research shows the "New Yorker" never printed such an explanation of the peace symbol. So what is the real story? It depends on what you read. Right-wing magazines, fundamentalist preachers and religious groups claim - often in fanatical sounding pamphlets t h a t the peace symbol is a broken cross and symbol of the anti-Christ. The Michigan Pólice Journal charges that the emblem was "adopted by various youth organizations on direct orders from the Communist party." Citing that disputed "New Yorker" magazine article, the journal claims that the emblem is "part of a long-range propaganda campaign of the Communists to encourage youth to express contempt for adults, for authority, and for the ideáis that built thé United States." The Journal continúes: "It is actually an ancient sign of evil known as the broken cross, sometimes called the crucified cross . . . The socalled peace symbol is an enemy flag of godless tradition, cleverly foisted on t h e unsuspecting." The Gospel Tract Society of Independence, Mo., declares in a pamphlet entitled "The Peace Symbol: The Mark of the Traitor!" that the sign "does not stand for peace but for neutralizing America's will to withstand Communist revolution in the world. It is not a symbol of peacè; it is the mark of the traitor, for behind the peace symbol is the determination of the Communist conspiracy to paralyze the United States so that communism can roll on across the world unopposed." The Concerned Christians for Christianity of New Ber1 i n, Wisconsin, s a y the symbol has been "known since 54-68 A.D. as the Nero cross or sign of the broken Jew, or symbol of the anti-Christ." This same group declares that the inverted cross was a well-known sign of Satan in the Middle Ages, and was also used in 711 A.D. "by the Saracen hordes i n v a d i n g Spain and in 1099 by the Saracens fighting against the crusaders." Mary Jo Lynch of the U-M School of Library Science and Ruth Redmond of the Ann Arbor Public Library, however, say that most of the alleged sources cited by the previous groups either do not exist or have been tempered with to ''prove'' that the peace symbol is the anti-Christ emblem. Miss Lynch has done a considerable amount of research on the peace symbol over the past couple of years, and all of her searching in a variety of sources leads to the following conclusión: The symbol was designed by Gerald Holtom in London in 1958 for an Easter maren of the Campaign for Nuclear Disarmament. The meaning of the symbol, according to the general secretary of the International Confederation for Disarmament and Peace in London, is twofold: "First of all, it represents the semaphore for the letters ND, standing for nuclear disarmament. Secondly, the broken cross represents the death of man, and the circle the unborn child. This is a reference to the genetic effects of nuclear weapons." Peggy Duffy, the general secretary who gave the above explanation to the London Times, says she can "assure you this is authoritative, as I" was general secretary of the Campaign for Nuclear Disarmament when it was first designed." A number of magazine articles, including "Nation," and "Christian Century," plus the Student Peace Union at the U-M, substantiate this explanation. "Christian Century" magazine in its May 13, 1970, issue printed an editorial opinión that "people who don't like peace also don't like the peace symbol. That's the conclusión we have come to after months of reading explanaaions of the symbol's significance. Protestants, Catholics, Jews, atheists, liberáis and fundamentalists who are antiwar wear it emblazoned on buttons or áangling f r o m chains around their necks, while superhawk and rightist devise their own theories concerning what it represents." Hugh Downs of the "Today" televisión show even put in his two cents about the controversy last year. "Bish op Bernadin is General Secretary of the United States Catholic Conference and he stated flatly that it was not an anti-Christ symbol," Downs said. He added: "Rev. David R. Hunter, deputy general secretary of the National Council of Churches of Christ in the United States, agrees with Bishop Bernadin and he supplied us with the following information . . . The symbol, he told us, was designed in London in 1958 for the direct action committee against war. The c i r c 1 e represents the world . . . The vertical line that bisects it is the semaphore signal code for the letter N . . . The two diagonal lines that look like the top of a Y mean letter D in the signal code.The letters N and D stand for nuclear disarmament and the promotion of that idea was the reason the symbol was created." Downs told his TV audience that "we thought you'd be interested in this explanation of the peace symbol's actual meaning and origin, whether or not you support the peace movement." But the battle of words rages on with each side firmly convinced it is right.