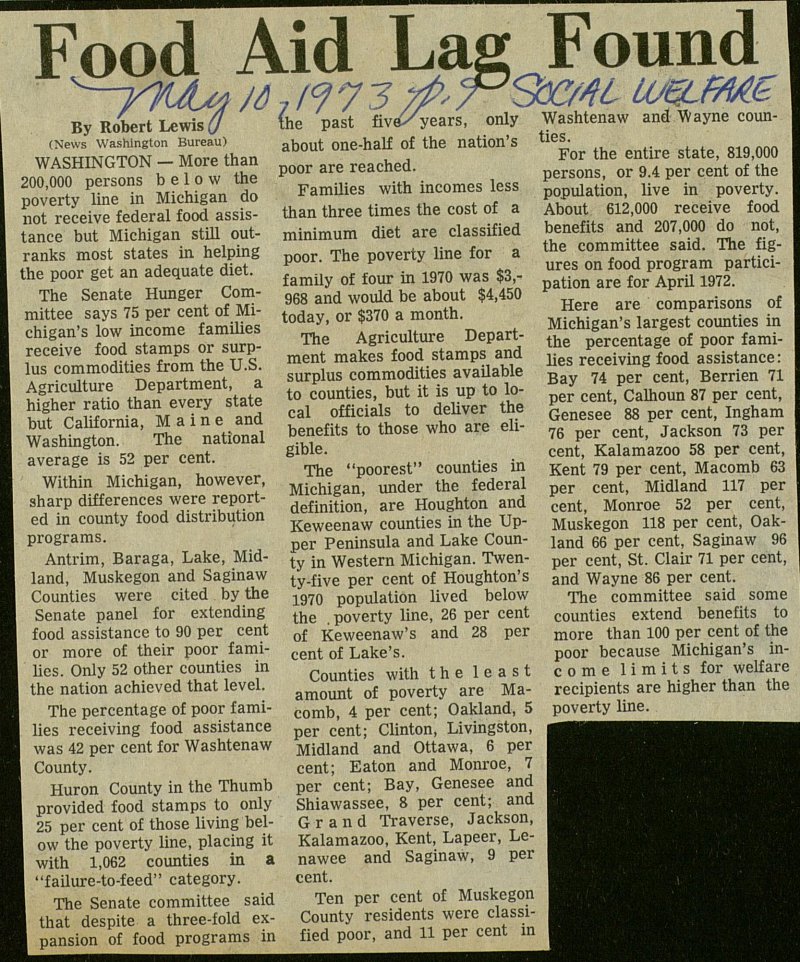 WASHINGTON - More than 200,000 persons below the poverty line in Michigan do not receive federal food assistance but Michigan still outranks most states in helping the poor get an adequate diet. The Senate Hunger Committee says 75 per cent of Michigan's low income families receive food stamps or surplus commodities from the U.S. Agriculture Department, a higher ratio than every state but California, M a i n e and Washington. The national average is 52 per cent. Within Michigan, however, sharp differences were reported in county food distribution I programs. Antrim, Baraga, Lake, Midland, Muskegon and Saginaw I Counties were cited by the Senate panel for extending I food assistance to 90 per cent I or more of their poor famiI lies. Only 52 other counties in I the nation achieved that level. The percentage of poor famiI lies receiving food assistance I was 42 per cent for Washtenaw I County. I Hurón County in the Thumb I provided food stamps to only I 25 per cent of those living belI ow the poverty line, placing it I with 1,062 counties in a I "failure-to-feed" category. I The Senate committee said I that despite a three-fold exI pansion of food programs in the past fivéyears, only about one-half of the nation's poor are reached. Families with incomes less than three times the cost of a minimum diet are classified poor. The poverty line for a family of four in 1970 was $3,968 and would be about $4,450 today, or $370 a month. The Agriculture Department makes food stamps and surplus commodities available to counties, but it is up to local officials to deliver the benefits to those who are eligible. The "poorest" counties in Michigan, under the federal definition, are Houghton and Keweenaw counties in the Upper Peninsula and Lake County in Western Michigan. Twenty-five per cent of Houghton's 1970 population lived below the .poverty line, 26 per cent of Keweenaw's and 28 per cent of Lake's. Counties with the least amount of poverty are Macomb, 4 per cent; Oakland, 5 per cent; Clinton, Livingston, Midland and Ottawa, 6 per cent; Eaton and Monroe, 7 per cent; Bay, Genesee and Shiawassee, 8 per cent; and Grand Traverse, Jackson, Kalamazoo, Kent, Lapeer, Lenawee and Saginaw, 9 per cent. Ten per cent of Muskegon County residents were classified poor, and 11 per cent in Washtenaw and Wayne counties. For the entire state, 819,000 persons, or 9.4 per cent of the population, live in poverty. About 612,000 receive food benefits and 207,000 do not, the committee said. The figures on food program participation are for April 1972. Here are comparisons of Michigan's largest counties in the percentage of poor families receiving food assistance : Bay 74 per cent, Berrien 71 per cent, Calhoun 87 per cent, Genesee 88 per cent, Ingham 76 per cent, Jackson 73 per cent, Kalamazoo 58 per cent, Kent 79 per cent, Macomb 63 per cent, Midland 117 per cent, Monroe 52 per cent, Muskegon 118 per cent, Oakland 66 per cent, Saginaw 96 per cent, St. Clair 71 per cent, and Wayne 86 per cent. The committee said some counties extend benefits to more than 100 per cent of the poor because Michigan's income limits for welfare recipients are higher than the poverty line.