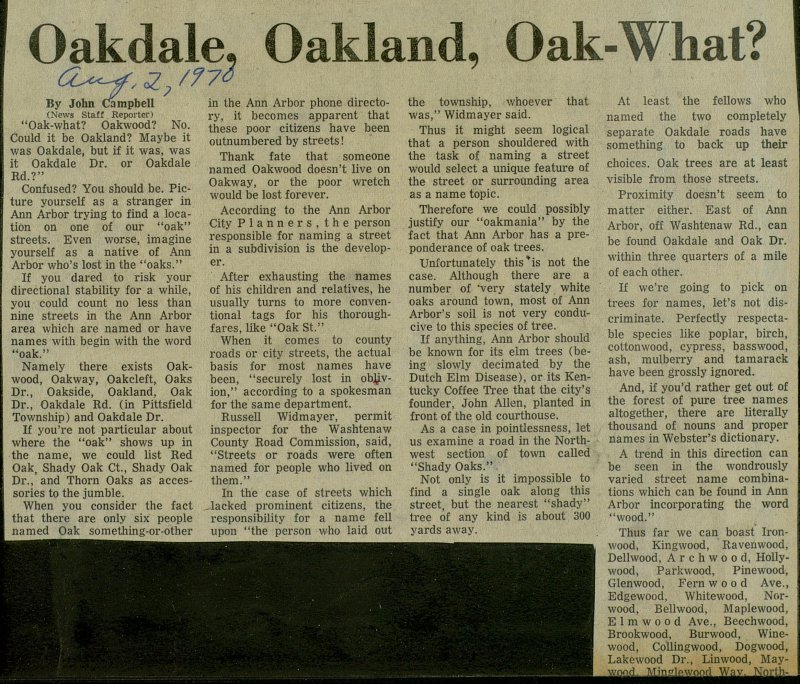 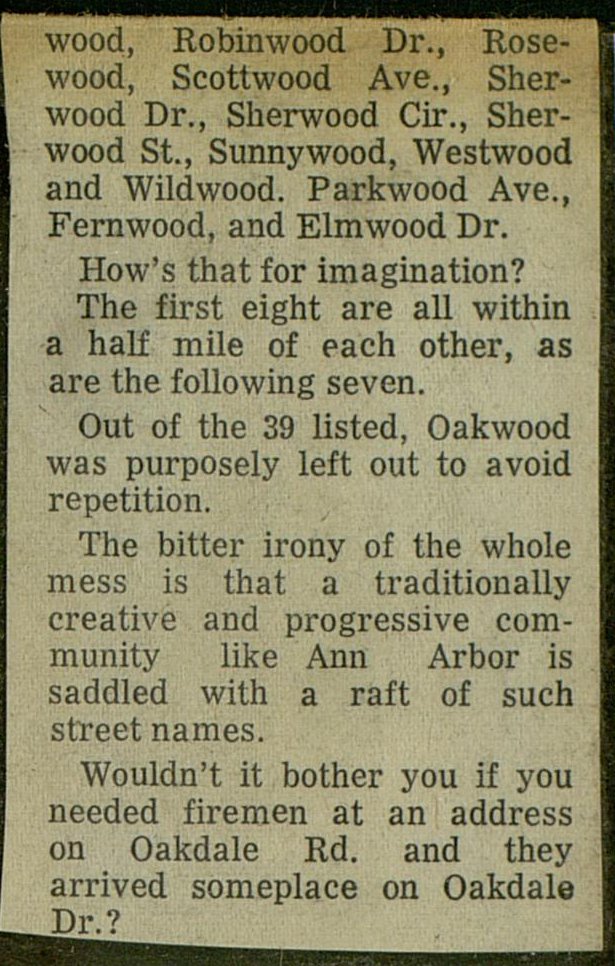 "Oak-what? Oakwood? No. Could it be Oakland? Maybe it was Oakdale, but if it was, was it Oakdale Dr. or Oakdale Rd.?" Confused? You should be. Picture yourself as a stranger in Ann Arbor trying to find a location on one of our "oak" streets. Even worse, imagine yourself as a native of Ann Arbor who's lost in the "oaks." If you dared to risk your directional stability for a while, you could count no less than nine streets in the Ann Arbor area which are named or have na mes with begin with the word "oak." Namely there exists Oakwood, Oakway, Oakcleft, Oaks Dr., Oakside, Oakland, Oak Dr., Oakdale Rd. (in Pittsfield Township) and Oakdale Dr. If you're not particular about where the "oak" shows up in the name, we could list Red Oak, Shady Oak Ct., Shady Oak Dr., and Thorn Oaks as accessories to the jumble. When you consider the fact that there are only six people named Oak something-or-other in the Ann Arbor phone directory, it becomes apparent that these poor citizens have been outnumbered by streets ! Thank fate that someone named Oakwood doesn't live on Oakway, or the poor wretch would be lost forever. According to the Ann Arbor City Planners, the person responsible for naming a Street in a subdivisión is the developer. After exhausting the names of his children and relatives, he usually turns to more conventional tags for his thoroughfares, like "Oak St." When it comes to county roads or city streets, the actual basis for most names have been, "securely lost in objvion," according to a spokesman for the same departa ent. Russell Widmayer, permit inspector for the Washtenaw County Road Commission, said, "Streets or roads were often named for people who lived on them." In the case of streets which . lacked prominent citizens, the responsibility for a name feil upon "the person who laid out the township, whoever that was," Widmayer said. Thus it might seem logical that a person shouldered with the task of naming a street would select a unique feature of the street or surrounding area as a name topic. Therefore we could possibly justify our "oakmania" by the fact that Ann Arbor has a preponderance of oak trees. Unfortunately this is not the case. Although there are a number of "very stately white oaks around town, most of Ann Arbor' s soil is not very conducive to this species of tree. If anything, Ann Arbor should be known for its elm trees (being slowly decimated by the Dutch Elm Disease), or its Kentucky Coffee Tree that the city's founder, John Allen, planted in front of the old courthouse. As a case in pointlessness, let us examine a road in the Northwest section of town called "Shady Oaks." Not only is it impossible to find a single oak along this street, but the nearest "shady" tree of any kind is about 300 yards away. At least the fellows who named the two completely separate Oakdale roads have something to back up their choices. Oak trees are at least visible from those streets. Proximity doesn't seem to matter either. East of Ann Arbor, off Washtenaw Rd., can be found Oakdale and Oak Dr. within three quarters of a mile of each other. If we're going to piek on trees for ñames, let's not discrimínate. Perfectly respectable species like poplar, birch, cottonwood, cypress, basswood, ash, mulberry and tamarack have been grossly ignored. And, if you'd rather get out of the forest of pure tree names altogether, there are literally thousand of nouns and proper names in Webster's dictionary. A trend in this direction can be seen in the wondrously varied street name combinations which can be found in Ann Arbor incorporating the word "wood." Thus far we can boast Ironwood, Kingwood, Ravenwood, Dellwood, Archwood, Hollywood, Parkwood, Pinewood, Glenwood, Fern wood Ave., Edgewood, Whitewood, Norwood, Bellwood, Maplewood, Elmwood Ave., Beechwood, Brookwood, Burwood, Winewood, Collingwood, Dogwood, Lakewood Dr., Linwood, Maywoori Minplpwood Wav. wood, Robinwood Dr., Rosewood, Scottwood Ave., Sherwood Dr., Sherwood Cir., Sherwood St., Sunnywood, Westwood and Wild wood. Parkwood Ave., Fernwood, and Elmwood Dr. How's that for imagination? The first eight are all within a half mile of each other, as are the following seven. Out of the 39 listed, Oakwood was purposely left out to avoid repetition. The bitter irony of the whole mess is that a traditionally creative and progressive community like Ann Arbor is saddled with a raft of such street names. Wouldn't it bother you if you needed firemen at an address on Oakdale Rd. and they arrived someplace on Oakdale _Dr.?