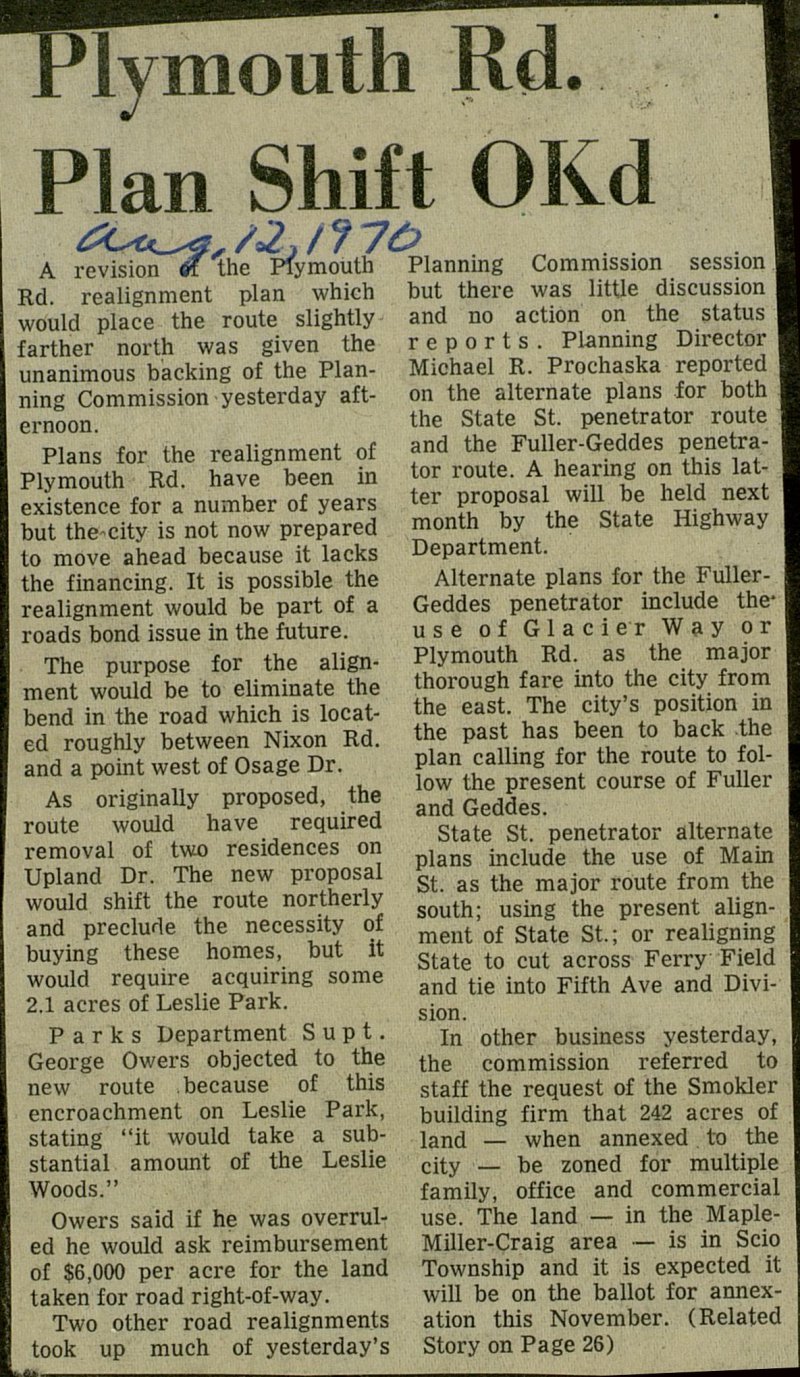 A revisión # the PIymouth Rd. realignment plan which would place the route slightly farther north was given the unanimous backing of the Planning Commission yesterday afternoon. Plans for the realignment of Plymouth Rd. have been in existence for a number of years but the-city is not now prepared to move ahead because it lacks the financing. It is possible the realignment would be part of a roads bond issue in the future. The purpose for the alignment would be to elimínate the bend in the road which is located roughly between Nixon Rd. and a point west of Osage Dr. As originally proposed, the route would have required removal of two residences on Upland Dr. The new proposal would shift the route northerly and preclude the necessity of buying these homes, but it would require acquiring some 2.1 acres of Leslie Park. P a r k s Department Supt. George Owers objected to the new route because of this encroachment on Leslie Park, stating "it would take a substantial amount of the Leslie Woods." Owers said if he was overruled he would ask reimbursement of $6,000 per acre for the land taken for road right-of-way. Two other road realignments took up much of yesterday's Planning Commission session I but there was little discussion I and no action on the status I reports. Planning Director I Michael R. Prochaska reported I on the altérnate plans for both I the State St. penetrator route and the Fuller-Geddes penetrator route. A hearing on this latter proposal will be held next month by the State Highway Department. ' Altérnate plans for the FullerGeddes penetrator include the use of Glacier Way o r Plymouth Rd. as the major thorough fare into the city from the east. The city's position in the past has been to back the plan calling for the route to follow the present course of Fuller and Geddes. State St. penetrator altérnate plans include the use of Main St. as the major route from the south; using the present alignment of State St.; or realigning State to cut across Ferry Field and tie into Fifth Ave and División. In other business yesterday, the commission referred to staff the request of the Smokler building firm that 242 acres of land - when annexed to the city - be zoned for multiple family, office and commercial use. The land - in the MapleMiller-Craig area - is in Scio Township and it is expected it will be on the ballot for annexation this November. (Related Story on Page 26)