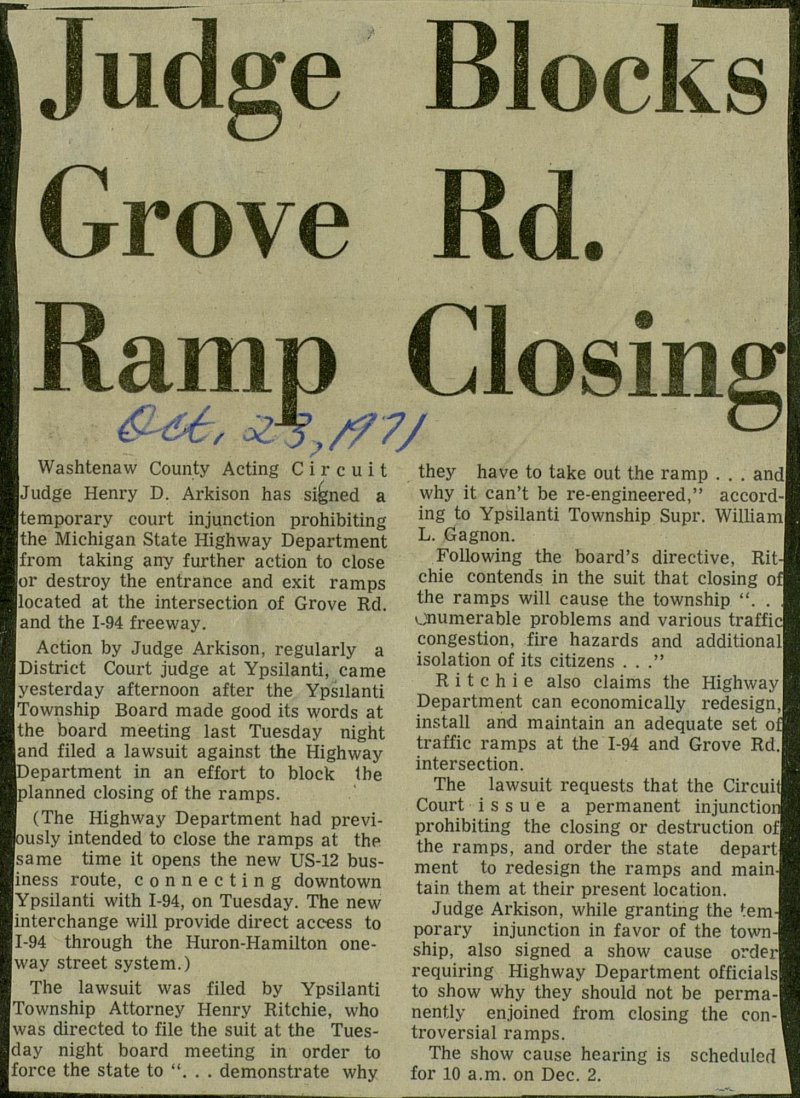 I Washtenaw County Acting Circuit Ijudge Henry D. Arkison has sined a Itemporary court injunction prohibiting Ithe Michigan State Highway Department Ifrom taking any further action to close lor destroy the entrance and exit ramps llocated at the intersection of Grove Rd. land the 1-94 freeway. Action by Judge Arkison, regularly a [District Court judge at Ypsilanti, carne lyesterday afternoon after the Ypsilanti Township Board made good its words at the board meeting last Tuesday night land filed a lawsuit against the Highway IDepartment in an effort to block the Iplanned closing of the ramps. I (The Highway Department had previpusly intended to close the ramps at thp Isame time it opens the new US-12 business route, connecting downtown Ypsilanti with 1-94, on Tuesday. The new interchange will provide direct acress to 1-94 through the Huron-Hamilton one!way street system.) The lawsuit was filed by Ypsilanti Township Attorney Henry Ritchie, who was directed to file the suit at the Tuesday night board meeting in order to force the state to ". . . demónstrate why they have to take out the ramp . . . and why it can't be re-engineered," according to Ypsilanti Township Supr. William L. Gagnon. Following the board's directive, RitJ chie contends in the suit that closing ofl the ramps will cause the township ". . 1 onumerable problems and various trafficl congestión, fire hazards and additionall isolation of its citizens . . ." Rit chie also claims the Highwayl Department can economically redesign,! install and maintain an adequate set ofl traffic ramps at the 1-94 and Grove Rdl intersection. The lawsuit requests that the CircuiJ Court issue a permanent injunctiorl prohibiting the closing or destruction ofl the ramps, and order the state departí ment to redesign the ramps and main-l tain them at their present location. Judge Arkison, while granting the tem-l porary injunction in favor of the town-l snip, also signed a show cause orderl requiring Highway Department officia lsl to show why they should not be perma-l nently enjoined from closing the con-1 troversial ramps. I The show cause hearing is scheduled ' for 10 a.m. on Dec. 2.