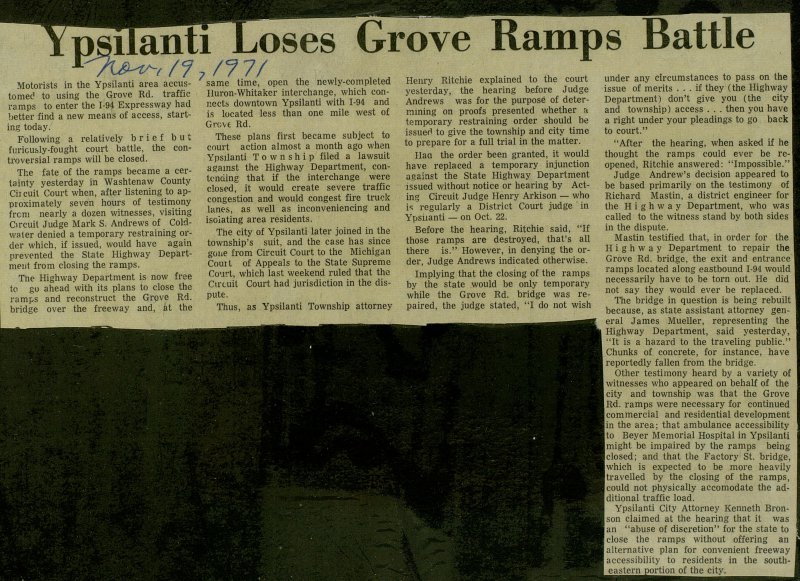 Motorists in the Ypsilanti area accustomed to using the Grove Rd. traffic ramps to enter the 1-94 Expressway had better find a new means of access, starting today. Following a relatively brief b u t fwicusly-fought court battle, the controversial ramps will be closed. The fate of the ramps became a certainty yesterday in Washtenaw County Cii cuit Court when, after listening to approximately seven hours of testimony frcm nearly a dozen witnesses, visiting Orcuit Judge Mark S. Andrews of Coldwater denied a temporary restraining order which, if issued, would have again prevented the State Highway Department from closing the ramps. The Highway Department is now free to go ahead with its plans to close the ramps and reconstruct the Grove Rd. bridge over the freeway and, at the same time, open the newly-completed Huron-Whitaker interchange, which connects downtown Ypsilanti with 1-94 and is located less than one mile west oí Grove Rd. These plans first became subject to court action almost a month ago when Ypsilanti T o w n s h i p filed a lawsuit against the Highway Department, contonáing that if the interchange were closed, it would créate severe traffic congestión and would congest fire truck lañes, as well as inconveniencing and isolating área residents. The city of Ypsilanti later joined in the township's suit, and the case has since gohe from Circuit Court to the Michigan Court of Appeals to the State Supreme Court, which last weekend ruled that the Circuit Court had jurisdiction in the dispute. Thus, as Ypsilanti Township attorney Heiiry Ritchie explained to the court yesterday, the hearing before Judge Andrews was for the purposë of determining on proofs presented whether a temporary restraining order should be issued to give the township and city time to prepare for a full trial in the matter. Haa the order been granted, it would have replaced a temporary injunction against the State Highway Department issued without notice or hearing by Acting Circuit Judge Henry Arkison - who is regularly a District Court judge in Ypsiianti - on Oct. 22. Before the hearing, Ritchie said, "If those ramps are destroyed, that's all there is." However, in denying the order, Judge Andrews indicated otherwise. Implying that the closing of the ramps by the state would be only temporary while the Grove Rd. bridge was repaired, the judge stated, "I do not wish under any circumstances to pass on the issue of merits . . . if they (the Highway Department) don't give you (the city and township) access . . . then you have a right under your pleadings to go back to court." "After the hearing, when asked if he thought the ramps could ever be reopened, Ritchie answered: "Impossible." Judge Andrew's decisión appeared to be based primarily on the testimony of Richard Mastín, a district engineer for the Highway Department, who was called to the witness stand by both sides in the dispute. Mastin testified that, in order for the Highway Department to repair the Grove Rd. bridge, the exit and entrance ramps located along eastbound 1-94 would necessarily have to be torn out. He did not say they would ever be replaced. The bridge in question is being rebuilt because, as state assistant attorney eral James Mueller, representing the Highway Department, said yesterday, "It is a hazard to the traveling public." Chunks of concrete, for instance, have reportedly fallen from the bridge. Other testimony heard by a variety of witnesses who appeared on behalf of the city and township was that the Grove Rd. ramps were necessary for continued commercial and residential development in the area; that ambulance accessibility to Beyer Memorial Hospital in Ypsilanti might be impaired by the ramps being closed; and that the Factory St. bridge, which is expected to be more heavily travelled by the closing of the ramps, could not physically accomodate the additional traffic load. Ypsilanti City Attorney Kenneth Bronson claimed at the hearing that it was an "abuse of discretion" for the state to close the ramps without offering an alternative plan for convenient freeway accessibility to residents in the southeastern portion of the city.