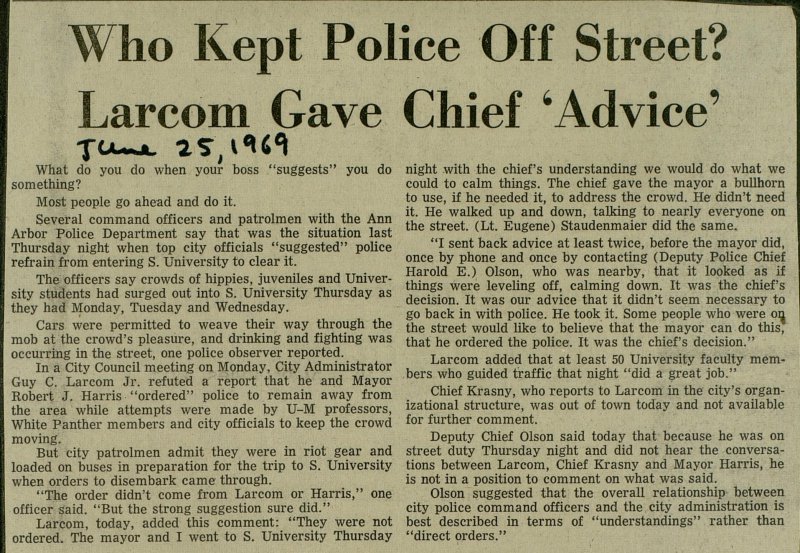 What do you do when your boss "suggests" you do something? Most people go ahead and do it. Several command officers and patrolmen with the Ann Arbor Pólice Department say that was the situation last Thursday night when top city officials "suggested" pólice refrain f rom entering S. University to clear it. The officers say crowds of hippies, juveniles and University students had surged out into S. University Thursday as they had Monday, Tuesday and Wednesday. Cars were permitted to weave their way through the mob at the crowd's pleasure, and drinking and fighting was occurring in the street, one pólice observer reported. In a City Council meeting on Monday, City Administrator Guy C. Larcom Jr. refuted a report that he and Mayor Robert J. Harris "ordered" pólice to remain away from the area while attempts were made by U-M professors, White Panther members and city officials to keep the crowd moving. But city patrolmen admit they were in riot gear and loaded on buses in preparation for the trip to S. University when orders to disembark carne through. "The order didn't come from Larcom or Harris," one officer said. "But the strong suggestion sure did." Larcom, today, added this comment: "They were not ordered. The mayor and I went to S. University Thursday night with the chief's understanding we would do what we could to calm things. The chief gave the mayor a bullhorn to use, if he needed it, to address the crowd. He didn't need it. He walked up and down, talking to nearly everyone on the street. (Lt. Eugene) Staudenmaier did the same. "I sent back advice at least twice, before the mayor did, once by phone and once by contacting (Deputy Pólice Chief Harold E.) Olson, who was nearby, that it looked as if things were leveling off, calming down. It was the chief's decisión. It was our advice that it didn't seem necessary to go back in with pólice. He took it. Some people who were on the street would like to believe that the mayor can do this, that he ordered the pólice. It was the chief's decisión." Larcom added that at least 50 University faculty members who guided traffic that night "did a great job." Chief Krasny, who reports to Larcom in the city's organizational structure, was out of town today and not available for further comment. Deputy Chief Olson said today that because he was on street duty Thursday night and did not hear the conversations between Larcom, Chief Krasny and Mayor Harris, he is not in a position to comment on what was said. Olson suggested that the overall relationship between city pólice command officers and the city administration is best described in terms of "understandings" rather than "direct orders."