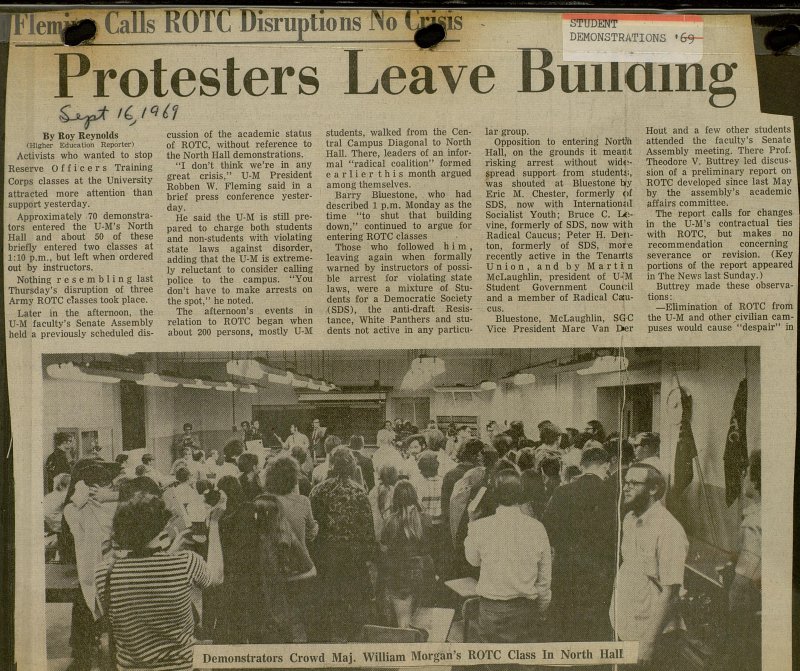 Activists who wanted to stop Reserve O f f i c e r s Training Corps classes at the University attracted more attention than support yesterday. Approximately 70 demonstrators entered the U-M's North Hall and about 50 of these briefly entered two classes at 1:10 p.m., but left when ordered out by instructors. Nothing resembling last Thursday's disruption of three Army ROTC classes took place. Later in the afternoon, the U-M faculty's Senate Assembly held a previously scheduled cussion of the academie status of ROTC, without reference to the North Hall demonstrations. "I don't think we're in any great crisis," U-M President Robben W. Fleming said in a brief press conference yesterday. He said the U-M is still prepared to charge both students and non-students with violating state laws against disorder, adding that the U-M is extremely reluctant to consider calling pólice to the campus. "You don't have to make arrests on the spot," he noted. The afternoon's events in relation to ROTC began when about 200 persons, mostly U-M students, walked from the Central Campus Diagonal to North Hall. There, leaders of an informal "radical coalition" formed earlier this month argued among themselves. Barry Bluestone, who had described 1 p.m. Monday as the time "to shut that building down," continued to argue for entering ROTC classes Those who followed h i m , leaving again when formally warned by instructors of possible arrest for violating state laws, were a mixture of Students for a Democratie Society (SDS), the anti-draft Resistance, White Panthers and students not active in any lar group. Opposition to entering Nortíh Hall, on the grounds it meamt risking arrest without wid;spread support f rom students;, was shouted at Bluestone bey Eric M. Chester, formerly f SDS, now with International Socialist Youth; Bruce C. Invine, formerly of SDS, now with Radical Caucus; Peter H. Dentón, formerly of SDS, more recently active in the Tenanrts Union, and by Martin McLaughlin, president of U-'M Student Government Counoil and a member of Radical Ca:ucus. Bluestone, McLaughlin, SGC Vice President Mare Van Eter Hout and a few other studentsl attended the faculty's Senate Assembly meeting. There Prof. Theodore V. Buttrey led discussion of a preliminary report on ROTC developed since last May by the assembly's academie affairs committee. The report calis for changes in the U-M's contractual ties with ROTC, but makes no recommendation concerning severance or revisión. (Key portions of the report appeared in The News last Sunday.) Buttrey made these observations : - Elimination of ROTC from the U-M and other civilian campuses would cause "despair" in the Defense Department. "They've made no contingency plans . . . and could not begin to expand the military academ i e s to offset (any s u c h loss) . . ." ' -Significant change in the status of ROTC at the U-M is apparently p o s s i b 1 e within terras of the present contract. That contract, for example, calis on the U-M to grant "appropriate credit" for ROTC clas;ses and this might be set at no credit, Buttrey suggested. Gradúate student Richard W. England urged professors not to think in terms of altering contracts, but of "whether you're going to sanction and legitimize the increasing militarization of our society." McLaughlin told the assembly meeting the only means of stuclying ROTC's status acceptabte to students would be through a special committee, divided 50-50 between students and professors, empowered to report directly to the U-M regënts, "not through normal academie channels," because "it'is not a question of academie freedom." The existing committee is scheduled to make a final report Oct. 1 to the assembly, not to the regents. The assembly agreed yesterday to hold a public forum on ROTC sometime between Oct. 1 and its regular meeting on Oct. 20. Last night, students about equal in number to those who gathered on the Diagonal at noon met and approved a program involving further distribution of leaflets and efforts to engage v a r i o u s persons i n debate concerning ROTC. No claus disruptions w e r e scheduled. The Senate Assembly's Civil Liberties Board issued a statement Sunday urging "those whose rights -may be impaired" by classroom demonstrations "to defend themselves by using the forum of civil courts ... in fcrder to avert a need for the use of remedies which may be harsher ..." Opposition to all I plassroom disruption was voiced Saturday by the assembly's executive board. "Tliere's no issue professors can agree on more than that,"l declared education Prof I Joseph N. Payne, assembljl chairman. I