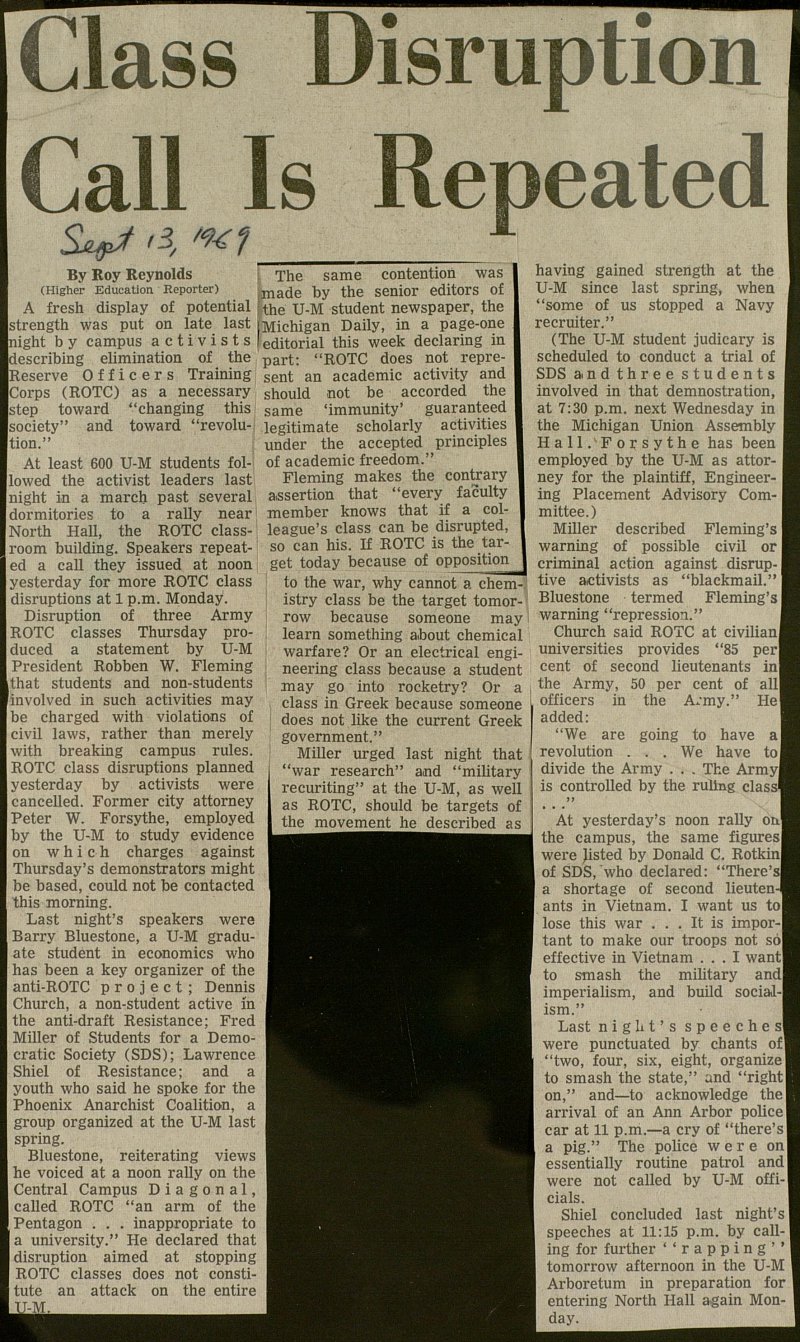 A fresh display of potential strength was put on late last night b y campus activists describing elimination of the Reserve Officers Training Corps (ROTC) as a necessary step toward "changing this society" and toward "revolution." At least 600 U-M students followed the activist leaders last night in a maren past several dormitories to a rally near North Hall, the ROTC classroom building. Speakers repeated a cali they issued at noon yesterday for more ROTC class disruptions at 1 p.m. Monday. Disruption of three Army ROTC classes Thursday produced a statement by U-M President Robben W. Fleming that students and non-students involved in such activities may be charged with violations of civil laws, rather than merely with breaking campus rules. ROTC class disruptions planned yesterday by activists were cancelled. Former city attorney Peter W. Forsythe, employed by the U-M to study evidence on w h i c h charges against Thursday's demonstrators might be based, could not be contacted this morning. Last night's speakers were Barry Bluestone, a U-M gradúate student in economics who has been a key organizer of the anti-ROTC project; Dennis Church, a non-student active ín the anti-draft Resistance; Fred Miller of Students for a Democratie Society (SDS); Lawrence Shiel of Resistance; and a youth who said he spoke for the Phoenix Anarchist Coalition, a group organized at the U-M last spring. Bluestone, reiterating views he voiced at a noon rally on the Central Campus Diagonal, called ROTC "an arm of the Pentagon . . . inappropriate to a university." He declared that disruption aimed at stopping ROTC classes does not constitute an attack on the entire The same contentioñ was made by the senior editors of the U-M student newspaper, the Michigan Daily, in a page-one editorial this week declaring in part: "ROTC does not represent an academie activity and should not be accorded the same 'immunity' guaranteed legitimate scholarly activities under the accepted principies of academie freedom." Fleming makes the contrary assertion that "every faculty member knows that if a colleague's class can be disrupted, so can his. If ROTC is the target today because of opposition to the war, why cannot a chemistry class be the target tomorrow because someone may learn something atoout chemical warfare? Or an electrical engineering class because a student may go into rocketry? Or a class in Greek because someone does not like the current Greek government." Miller urged last night that I "war research" and "military recuriting" at the U-M, as well I as ROTC, should be targets of I the movement he described as I having gained strength at the U-M since last spring, when "some of us stopped a Navy reeruiter." (The U-M student judicary is scheduled to conduct a trial of SDS and three students involved in that demnostration, I at 7:30 p.m. next Wednesday in the Michigan Union Assembly HallForsythe has been employed by the U-M as attorney for the plaintiff, Engineering Placement Advisory Committee.) Miller described Fleming's I warning of possible civil or I criminal action against disrup-l tive activists as "blaekmail." I Bluestone termed Fleming's I warning "repression." Church said ROTC at civilianl universities provides "85 perl cent of second lieutenants inl the Army, 50 per cent of all! officers in the Army." Hel added: "We are going to have al revolution . . . We have tol divide the Army . . . The Armyl is controlled by the ruling classl ..." At yesterday's noon rally on.1 the campus, the same figures! were Jisted by Donald C. Rotkinl of SDSwho declared: "There'sl a shortage of second lieuten-1 ants in Vietnam. I want us tol lose this war . . . It is impor-l tant to make our troops not sol effective in Vietnam ... I want! to smash the military andl imperialism, and build social-l ism." Last niglit's speeches! were punctuated by chants ofl "two, four, six, eight, organizel to smash the state," and "rightl on," and- to acknowledge thel arrival of an Ann Arbor policel car at 11 p.m.- a cry of "there'sl a pig." The pólice were onl essentially routine patrol andl were not called by U-M officials. Shiel concluded last night's speeches at 11:15 p.m. by 1 ing for further "rapping" tomorrow afternoon in the U-M Arboretum in preparation for entering North Hall again Monday.