Fleming: We Will Prosecute 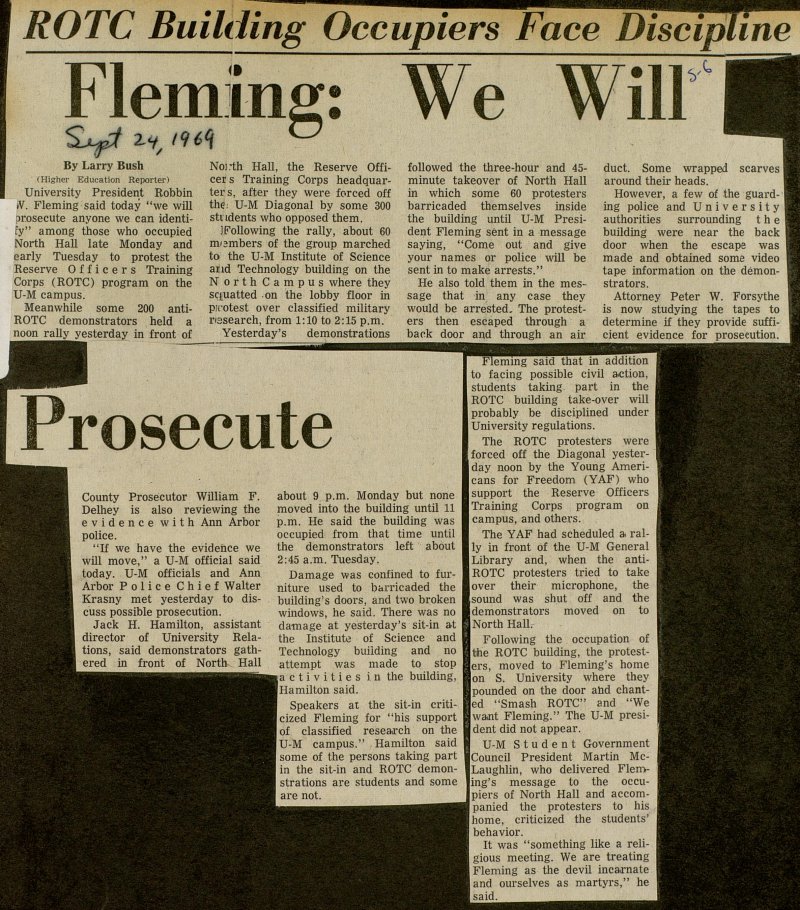 University President Robbin (V. Fleming said today "we will pr.osecute anyone we can identiEy" among those who occupied North Hall late Monday and early Tuesday to protest the Reserve Officers Training Corps (ROTC) program on the U-M campus. Meanwhile some 200 antiROTC demonstrators held a noon rally yesterday in front of Noj:th Hall, the Reserve Officers Training Corps headquarters, after they were forced off the: U-M Diagonal by some 300 stvidents who opposed them. JFollowing the rally, about 60 rrusmbers of the group marched to the U-M Institute of Science and Technology building on the North Campus where they scjiiiatted on the lobby floor in protest over classified military research, from 1:10 to 2:15 p.m. Yesterday's demonstrations followed the three-hour and 45minute takeover of North Hall in which some 60 protesters barricaded themselves inside the building until U-M President Fleming sent in a message saying, "Come out and give your ñames or pólice will be sent in to make arrests." He also told them in the message that in any case they would be arrested. The protesters then escaped through a bark door and through an air duet. Some wrapped scarves I around their heads. However, a few of the 1 ing pólice and Universityl authorities surrounding the building were near the back door when the escape was I made and obtained some video tape information on the démonstrators. Attorney Peter W. Forsythe is now studying the tapes to determine if they provide sufficient evidence for prosecution. County Prosecutor William F. Delhey is also reviewing the evidence with Ann Arbor pólice. "If we have the evidence we will move," a U-M official said today. U-M officials and Ann Arbor Pólice Chief Walter Krasny met yesterday to discuss possible prosecution. Jack H. Hamilton, assistant director of University Relations, said demonstrators gathered in front of North Hall about 9 p.m. Monday but none moved into the building until 11 p.m. He said the building was occupied from that time until the demonstrators left about 2:45 a.m. Tuesday. Damage was confined to furniture used to barricaded the building's doors, and two broken windows, he said. There was no damage at yesterday's sit-in at the Institute of Science and Technology building and no attempt was made to stop a c t i v i t i e s in the building, Hamilton said. Speakers at the sit-in criticized Fleming for "his support of classified research on the U-M campus." Hamilton said some of the persons taking part in the sit-in and ROTC demonstrations are students and some are not. Fleming said that in addition to facing possible civil action, students taking part in the ROTC building take-over will probably be disciplined under University regulations. The ROTC protesters were forced off the Diagonal yesterday noon by the Young Americans for Freedom (YAF) who support the Reserve Officers Training Corps program on campus, and others. The YAF had scheduled a rally in front of the U-M General Library and, when the antiROTC protesters tried to take over their microphone, the sound was shut off and the demonstrators moved on to North Hall, Following the occupation of the ROTC building, the protesters, moved to Fleming's home on S. University where they pounded on the door and chanted "Smash ROTC" and "We want Fleming." The U-M president did not appear. U-M Student Government Council President Martin McLaughlin, who delivered Fleming's message to the occupiers of North Hall and accompanied the protesters to his home, criticized the students' behavior. It was "something like a religious meeting. We are treating Fleming as the devil incarnate and ourselves as martyrs," he said.