Demonstrations Can Be Costly For City, County 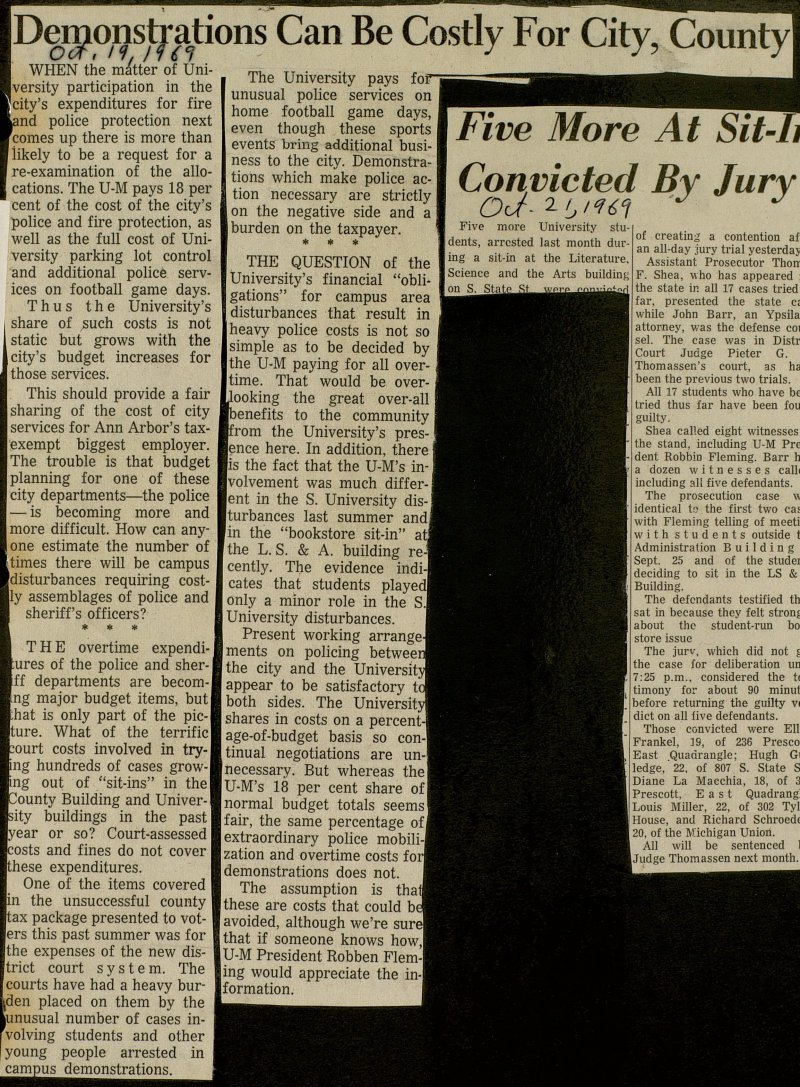 WHEN the matter of University participation in the city's expenditures for fire and pólice protection next comes up there is more than likely to be a request for a re-examination of the allocations. The U-M pays 18 per cent of the cost of the city's pólice and fire protection, as well as the full cost of University parking lot control and additional pólice services on football game days. T h u s the University's share of ;such costs is not static but grows with the city's budget increases for those services. This should provide a fair sharing of the cost of city services for Ann Arbor's taxexempt biggest employer. The trouble is that budget planning for one of these city departments - the pólice - is becoming more and more difficult. How can anyone estímate the number of times there will be campus disturbances requiring costly assemblages of pólice and sheriff 's officers? THE overtime expendilures of the pólice and sheriff departments are becomIng major budget items, but pat is only part of the picIture. What of the terrific bourt costs involved in tryEng hundreds of cases growftng out of "sit-ins" in the County Building and Univerpity buildings in the past year or so? Court-assessed costs and fines do not cover these expenditures. One of the items covered in the unsuccessful county tax package presented to I ers this past summer was for the expenses of the new district court system. The courts have had a heavy burflen placed on them by the unusual number of cases inyolving students and other young people arrested in :ampus demonstrations. , The University pays fof" unusual pólice services on home football game days, even though these sports events bring additional business to the city. Demonstrations which make pólice action necessary are strictly on the negative side and a burden on the taxpayer. THE QUESTION of the Üniversity's financial "obligations" for campus area disturbances that result in heavy pólice costs is not so simple as to be decided by the U-M paying for all overtime. That would be overlooking the great over-all penefits to the community ffrom the University's presence here. In addition, there is the fact that the U-M's involvement was much different in the S. University disturbances last summer andj in the "bookstore sit-in" at the L.S. & A. building recently. The evidence indicates that students played only a minor role in the S. University disturbances. j Present working arrange-l ments on policing betweenj the city and the Universityl appear to be satisfactory tol both sides. The Universityl shares in costs on a percent-I age-of-budget basis so continual negotiations are unnecessary. But whereas the U-M's 18 per cent share of normal budget totals seems fair, the same percentage of] extraordinary pólice mobili-j zation and overtime costs forl demonstrations does not. I The assumption is thal these are costs that could bel avoided, although we're surel that if someone knows how, U-M President Robben Fleming would appreciate the in-l formation.