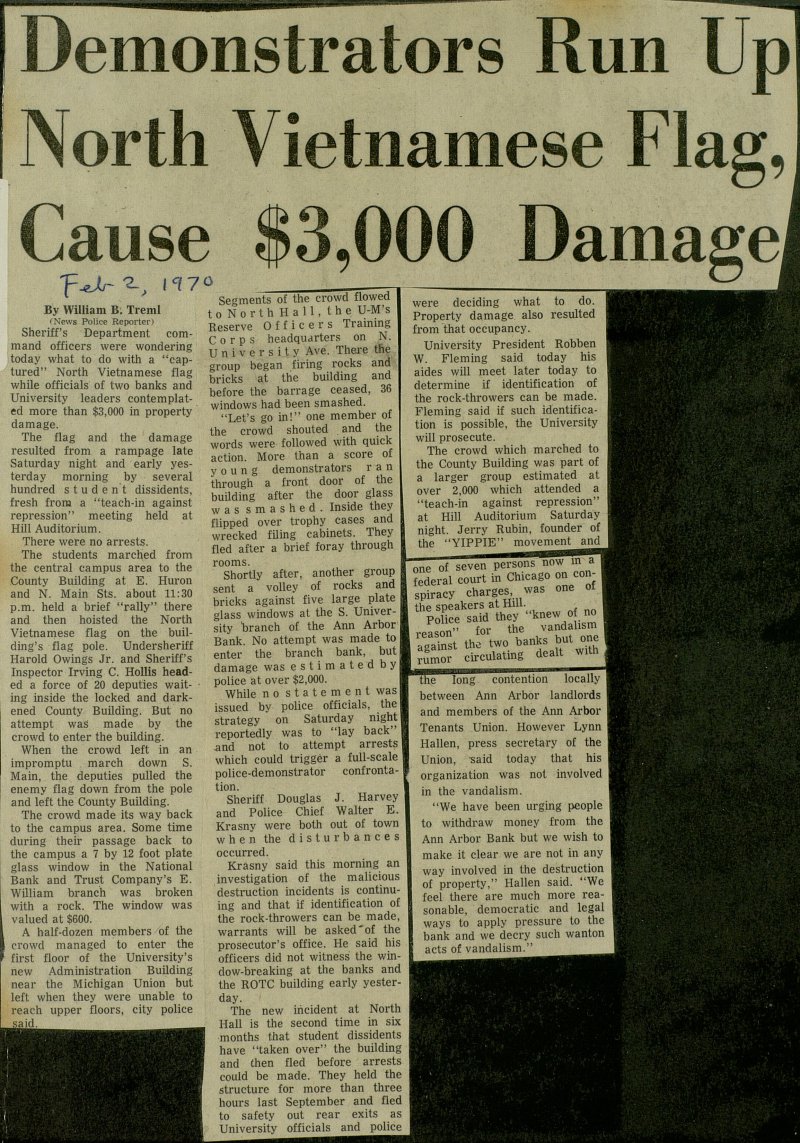 Sheriff's Department command officers were wondering today what to do with a "captured" North Vietnamese flag while officials of two banks and University leaders contemplated more than $3,000 in property damage. The flag and the damage resulted from a rampage late Saturday night and early yesterday morning by several hundred student dissidents, fresh from a "teach-in against repression" meeting held at HUI Auditorium. There were no arrests. The students marched from the central campus area to the County Building at E. Huron and N. Main Sts. about 11:30 p.m. held a brief "rally" there and then hoisted the North Vietnamese flag on the building's flag pole. Undersheriff Harold Owings Jr. and Sheriff's Inspector Irving C. Hollis headed a forcé of 20 deputies ■ ing inside the locked and darkened County Building. But no attempt was made by the crowd to enter the building. When the crowd left in an impromptu march down S. Main, the deputies pulled the enemy flag down from the pole and left the County Building. The crowd made its way back to the campus area. Some time during their passage back to the campus a 7 by 12 foot plate glass window in the National Bank and Trust Company's E. William branch was broken with a rock. The window was valued at $600. A half-dozen members of the crowd managed to enter the first floor of the University's new Administration Building near the Michigan Union but left when they were unable to reach upper floors, city pólice said. __ Segmente of the crowd flowed toNorthHall, the U-M's Reserve Officers Traming Corps headquarters on N. University Ave. There the group began firing rocks and bricks at the building and before the barrage ceased, 36 windows had been smashed. "Let's go in!" one member of the crowd shouted and the words were followed with quick action. More than a score of y o u n g demonstrators r a n through a front door of the building after the door glass was smashed. Inside they flipped over trophy cases and wrecked filing cabinets. They fled after a brief foray through rooms. Shortly after, another group sent a volley of rocks and bricks against five large plate glass windows at the S. University branch of the Ann Arbor Bank. No attempt was made to enter the branch bank, but damage was estimatedby pólice at over $2,000. While no statement was issued by pólice officials, the strategy on Saturday night reportedly was to "lay back" and not to attempt arrests which could triggèr a full-scale police-demonstrator confrontation. Sheriff Douglas J. Harvey and Pólice Chief Walter E. Krasny were both out of town when the disturbances occurred. Krasny said this morning an investigation of the malicious destruction incidents is continuing and that if identification of the rock-throwers can be made, warrants will be asked'of the prosecutor's office. He said his officers did not witness the window-breaking at the banks and the ROTC building early yesterdav. The new incident at North Hall is the second time in six months that student dissidents have "taken over" the building and then fled before arrests could be made. They held the structure for more than three hours last September and fled to safety out rear exits as University officials and pólice were deciding what to do. Property damage also resulted from that occupancy. University President Robben W. Fleming said today his aides will meet later today to determine if identification of the rock-throwers can be made. Fleming said if such identification is possible, the University will prosecute. The crowd which marched to the County Building was part of a larger group estimated at over 2,000 which attended a "teach-in against repression" at Hill Auditorium Saturday night. Jerry Rubin, founder of the "YIPPIE" movement and one of seven persons now m a federal court in Chicago on conspiracy charges was one of the speakers at Hul. Pólice said they "knew o no reason for the jandalism against the two banks but one rumor circulating dealt with the long contention locally between Ann Arbor lancllords and members of the Ann Arbor Tenants Union. However Lynn Hallen, press secretary of the Union, -said today that his organization was not involved in the vandalism. "We have been urging people to withdraw money from the Ann Arbor Bank but we wish to make it clear we are not in any way involved in the destruction of property," Hallen said. "We feel there are much more reasonable, democratie and legal ways to apply pressure to the bank and we decry such wanton acts of vandalism."