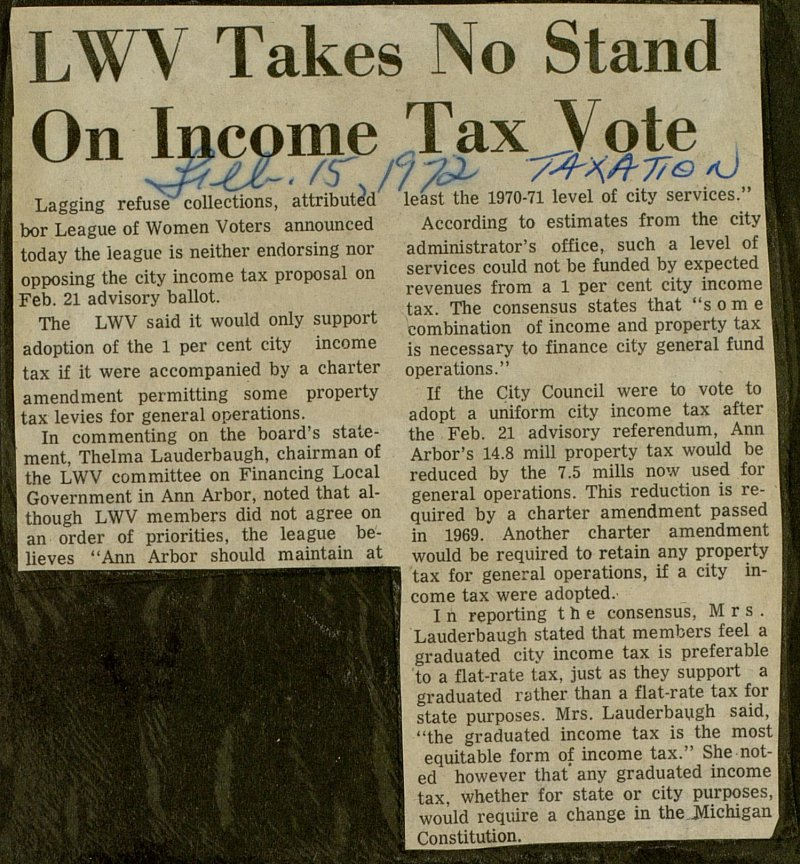 Lagging refuse collections, attributed bor League of Women Voters announced today the league is neither endorsing nor opposing the city income tax proposal on Feb. 21 advisory ballot. The LWV said it would only support adoption of the 1 per cent city income tax if it were accompanied by a charter amendment permitting some property tax levies for general operations. In commenting on the board's stateI ment, Thelma Lauderbaugh, chairman of I the LWV committee on Financing Local I Government in Ann Arbor, noted that alI though LWV members did not agree on I an order of priorities, the league beI lie ves "Ann Arbor should maintain at least the 1970-71 level of city services." ■ According to estimates from the city ■ administrator's office, such a level of I services could not be funded by expected ■ revenues from a 1 per cent city income ■ tax. The consensus states that "som el combination of income and property tax I is necessary to finance city general fund ■ operations." If the City Council were to vote to I adopt a uniform city income tax after the Feb. 21 advisory referendum, Ann I Arbor's 14.8 mili property tax would be I reduced by the 7.5 milis now used for I general operations. This reduction is I quired by a charter amendment passed in 1969. Another charter amendment I would be required to retain any property I I tax for general operations, if a city I I come tax were adopted. I n reporting the consensus, M r s . Lauderbaugh stated that members feel a I graduated city income tax is preferable I I to a flat-rate tax, just as they support a I I graduated rather than a flat-rate tax for I I state purposes. Mrs. Lauderbaugh said, I I "the graduated income tax is the most! I equitable form of income tax." She 1 I ed however that' any graduated income I I tax, whether for state or city purposes, I I would require a change in the .Michigan I I Constitutioiu, . - - iB