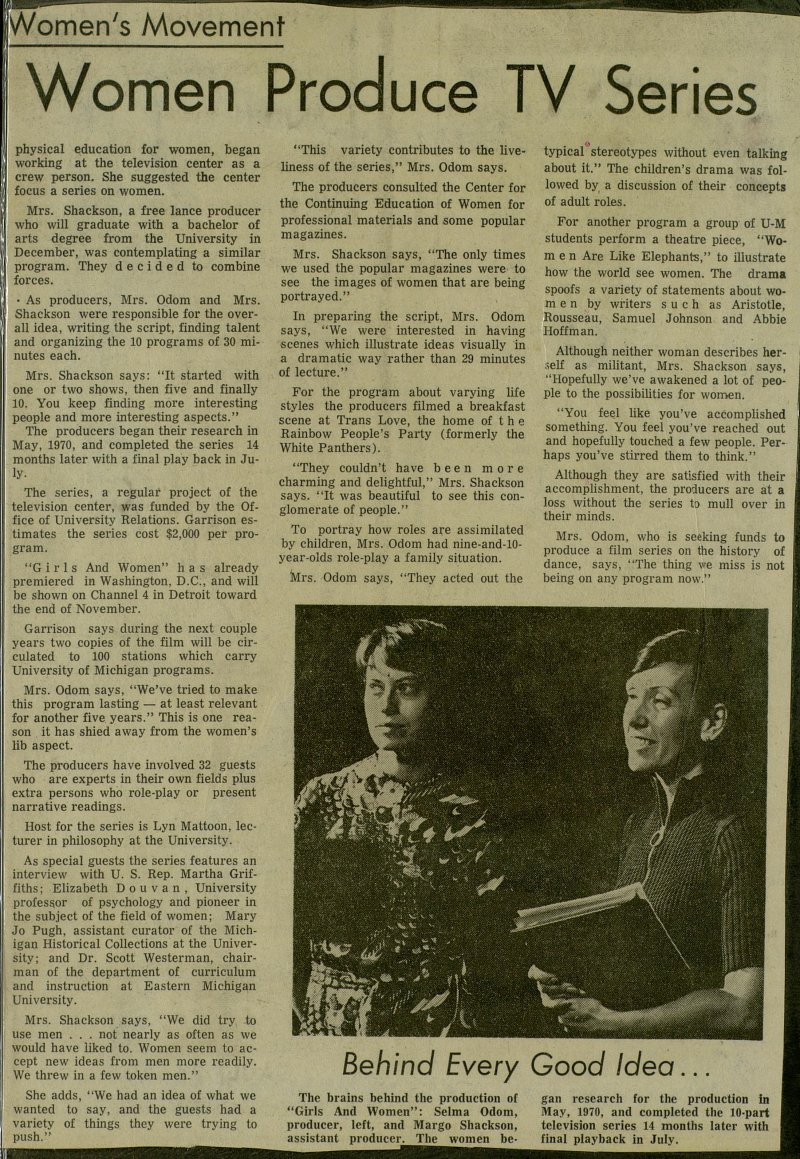 "Girls And Women" may sound like an X-rated skin flick. It isn't. But like its rawer cousin, this new 10part film series, which was produced by the University Televisión Center, is meant to be provocative. "I hope in effect it would be upsetting to women. Upsetting so they would challenge their life styles, what they are doing," says Margo Shackson, assistant producer. The seríes focuses on the physical and sociological differences between the sexes, the psychology of women, variations of life styles, women's place in history, stereotypes of women and women's rights. Garnett Garrison, director of broadcasting at the televisión center, says he is not aware of other series being done on the historie development of the women's movement. He says: "With the women's lib movement, undoubtedly there have been some individual programs. But as for an educational series, we're among the first." Perhaps just as unusual as the series topic are the two women producers : Selma Odom, producer, and Mrs. Shackson, assistant. Garrison says: "Unfortunately, over the years there haven't been many women producers. We've had a series of them here - several since 1958. There are more women producers in educational broadcasting than commercial." Mrs. Odom, assistant professor of physical education for women, began working at the televisión center as a crew person. She suggested the center focus a series on women. Mrs. Shackson, a free lance producer who will gradúate with a bachelor of arts degree from the University in December, was contemplating a similar program. They decided to combine forces. As producers, Mrs. Odom and Mrs. Shackson were responsible for the overall idea, writing the script, finding talent and organizing the 10 programs of 30 minutes each. Mrs. Shackson says: "It started with one or two shows, then five and finally 10. You keep finding more interesting people and more interesting aspects." The producers began their research in May, 1970, and completed the series 14 months later with a final play back in Juiy. The series, a regular project of the televisión center, was funded by the Office of University Relations. Garrison estimates the series cost $2,000 per program. "G iris And Women" has already premiered in Washington, D.C., and will be shown on Channel 4 in Detroit toward the end of November. Garrison says during the next couple years two copies of the film will be circulated to 100 stations which carry University of Michigan programs. Mrs. Odom says, "We've tried to make this program lasting - at least relevant for another five years." This is one reason it has shied away from the women's lib aspect. The producers have involved 32 guests who are experts in their own fields plus extra persons who role-play or present narrative readings. Host for the series is Lyn Mattoon, lecturer in philosophy at the University. As special guests the series features an interview with U. S. Rep. Martha Griffiths ; Elizabeth D o u v a n , University professor of psychology and pioneer in the subject of the field of women ; Mary Jo Pugh, assistant curator of the Michigan Historical Collections at the University; and Dr. Scott Westerman, chairman of the department of curriculum and instruction at Eastern Michigan University. Mrs. Shackson says, "We did try -to use men . . . not nearly as often as we would have liked to. Women seem to accept new ideas from men more readily. We threw in a few token men." She adds, "We had an idea of what we wanted to say, and the guests had a variety of things they were trying to push." "This variety contributes to the liveliness of the series," Mrs. Odom says. The producers consulted the Center for the Continuing Education of Women for professional materials and some popular magazines. Mrs. Shackson says, "The only times we used the popular magazines were to see the images of women that are being portrayed." In preparing the script, Mrs. Odom says, "We were interested in having scènes which illustrate ideas visually in a dramatic way rather than 29 minutes of lecture." For the program about varying life styles the producers filmed a breakfast scène at Trans Love, the home of t h e Rainbow People's Party (formerly the White Panthers). "They couldn't have been more charming and delightful," Mrs. Shackson says. "It was beautiful to see this conglomérate of people." To portray how roles are assimilated by children, Mrs. Odom had nine-and-10year-olds role-play a family situation. Mrs. Odom says, "They acted out the typical stereotypes without even talking about it." The children's drama was followed by a discussion of their concepts of adult roles. For another program a group of U-M students perform a theatre piece, "Wom e n Are Like Elephants," to illustrate how the world see women. The drama spoofs a variety of statements about women by writers s u c h as Aristotle, Rousseau, Samuel Johnson and Abbie Hoffman. Although neither woman describes herself as militant, Mrs. Shackson says, "Hopefully we've awakened a lot of people to the possibilities for women. "You feel like you've accomplished something. You feel you've reached out and hopefully touched a few people. Perhaps you've stirred them to think." Although they are satisfied with their accomplishment, the producers are at a loss without the series to muil over in their minds. Mrs. Odom, who is seeking funds to produce a film series on the history of dance, says, "The thing we miss is not being on any program now."