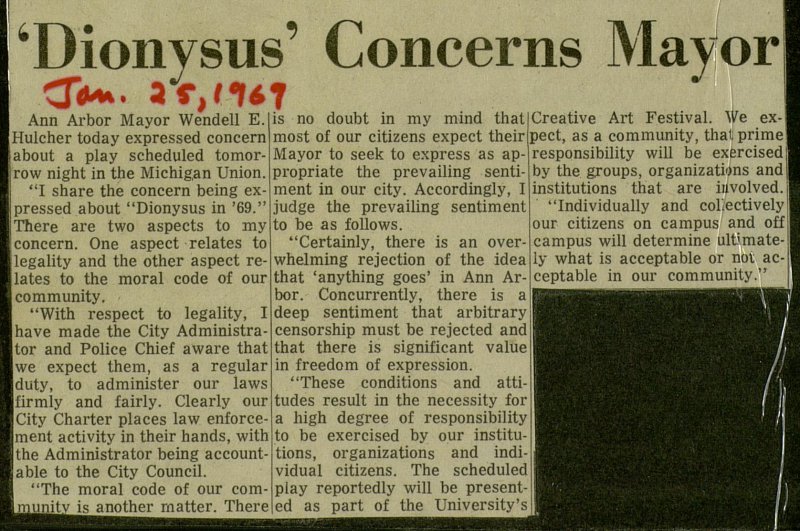 - # - Ann Arbor Mayor Wendell E. Hulcher today expressed concern about a play scheduled tomorrow night in the Michigan Union. "I share the concern being expressed about "Dionysus in '69." There are two aspects to my 'concern. One aspect relates to jlegality and the other aspect relates to the moral code of our community. "With respect to legality, I have made the City Administrator and Pólice Chief aware that Iwe expect them, as a regular Iduty, to administer our laws Ifirmly and fairly. Clearly our [City Charter places law enforceIment activity in their hands, with the Administrator being accountlable to the City Council. "The moral code of our comImunitv is another matter. There I is no doubt in my mind that most of our citizens expect their Mayor to seek to express as appropriate the prevailing sentiment in our city. Accordingly, I judge the prevailing sentiment to be as follows. "Certainly, there is an overwhelming rejection of the idea that 'anything goes' in Ann Arbor. Concurrently, there is a deep sentiment that arbitrary censorship must be rejected and that there is significant value in freedom of expression. "These conditions and attitudes result in the necessity for a high degree of responsibility to be exercised by our institutions, organizations and individual citizens. The scheduled play reportedly will be presented as part of the University's Creative Art Festival. We ex-j peet, as a community, that prime] responsibility will be exercisedj by the groups, organizatwns andj institutions that are iuvolved.j "Individually and coliectively our citizens on campus and off campus will determine ulümately what is acceptable or not acceptable in our community."