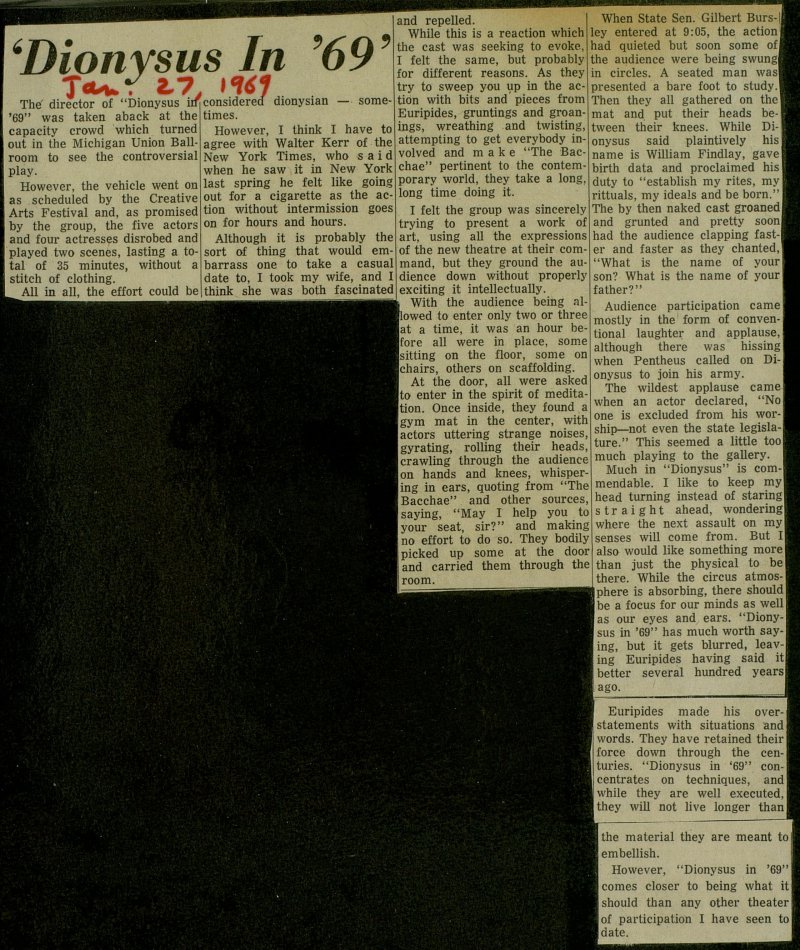 The' director of "Dionysus ü '69" was taken aback at the capacity crowd which turned out in the Michigan Union Ballroom to see the controversial play. However, the vehicle went on as scheduled by the Creative Arts Festival and, as promised by the group, the five actors and four actresses disrobed and played two scènes, lasting a total of 35 minutes, without a stitch of clothing. All in all, the effort could be considered dionysian - i times. However, I think I have to : agree with Walter Kerr of the New York Times, who s a i d when he saw it in New York last spring he feit like going out for a cigarette as the action without intermission goes on for hours and hours. Although it is probably the sort of thing that would embarrass one to take a casual date to, I took my wife, and I think she was both fascinated and repelled. While this is a reaction which the cast was seeking to evoke, [ feit the same, but probably Por different reasons. As they try to sweep you up in the action with bits and pieces from Eurípides, gruntings and groanings, wreathing and twisting, attempting to get everybody involved and m a k e "The Bacchae" pertinent to the contemporary world, they take a long. long time doing it. I feit the group was sincerely trying to present a work of art, using all the expressions of the new theatre at their command, but they ground the audience down without properly exciting it intellectually. l With the audience being allowed to enter only two or three at a time, it was an hour before all were in place, some sitting on the floor, some on chairs, others on scaffolding. At the door, all were asked to enter in the spirit of meditation. Once inside, they found a gym mat in the center, with actors uttering strange noises, gyrating, rolling their heads, crawling through the audience on hands and knees, whispering in ears, quoting from "The Bacchae" and other sources, saying, "May I help you to your seat, sir?" and making no effort to do so. They bodily picked up some at the door and carried them through the room. When State Sen. Gilbert Burs-B ey entered at 9:05, the actionB ïad quieted but soon some of ,he audience were being swungH n circles. A seated man wasM jresented a bare foot to study.R Then they all gathered on the mat and put their heads be-B tween their knees. While Di-B onysus said plaintively hisB name is William Findlay, gaveB birth data and proclaimed hisB duty to "establish my rites, myl rittuals, my ideáis and be born." " The by then naked cast groanedB and grunted and pretty soonB had the audience clapping fast-B er and f aster as they chanted.B "What is the name of yourB son? What is the name of yourB father?" 1 Audience participation cameB mostly in the form of B tional laughter and applause.B although there was hissingB when Pentheus called on Di-B onysus to join his army. 1 The wildest applause cameB when an actor declared, "NoB one is excluded from his wor-B ship- not even the state B ture." This seemed a little tooB much playing to the gallery. Much in "Dionysus" is com-B mendable. I like to keep myl head turning instead of staring! straight ahead, wonderingl where the next assault on myl senses will come from. But il also would like something morel than just the physical to bel there. While the circus atmos- Iphere is absorbing, there shouldl be a focus for our minds as welll las our eyes and ears. "Diony-I sus in '69" has much worth say-l ing, but it gets blurred, leav- ing Eurípides having said itl better several hundred yearsl Ugo. I Eurípides made his over-l statements with situations andl words. They have retained their I force down through the cen-l turies. "Dionysus in '69" con-l centrates on techniques, andl while they are well executed.l they will not live longer thanl Ithe material they are meant tol I embellish. However, "Dionysus in '69" ■ comes closer to being what it Ishould than any other theater lof participation I have seen to ■ date. I