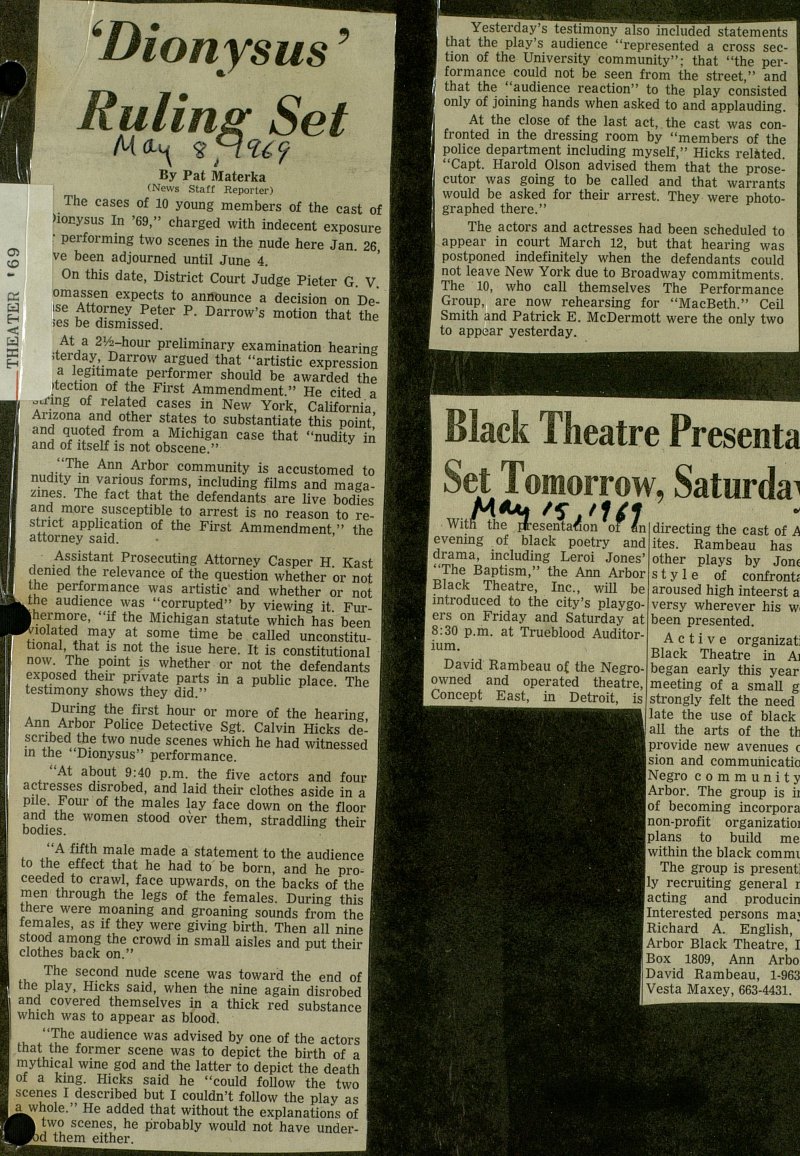 ine cases of 10 young members of the cast of iior.ysus In '69," charged with indecent exposure performing two scènes in the nude here Jan. 26, ve been adjourned until June 4. On this date, District Court Judge Pieter G. V omassen expects to anrtounce a decisión on Deise Attorney Peter P. Darrow's motion that the es be dismissed. At a 212-hour preliminary examination hearing terday Darrow argued that "artistic expression a legitímate performer should be awarded the tection of the First Ammendment." He cited a ou-ing of related cases in New York, California Amona and other states to substantiate this point' and quoted from a Michigan case that "nudity iñ and of ïtself is not obscene." "The Ann Arbor community is accustomed to nudity in various forms, including films and magazines. The fact that the defendants are live bodies and more susceptible to arrest is no reason to restrict application of the First Ammendment " the I attorney said. I Assistant Prosecuting Attorney Casper H Kast I denied the relevance of the question whether or not I the performance was artistic and whether or not the audience was "corrupted" by viewing it I Finermore, if the Michigan statute which has been Wolated may at some time be called unconstituhonal that is not the isue here. It is constitutional now. The pomt is whether or not the defendants exposed their private parts in a public place The testimony shows they did." During the first hour or more of the hearing Ann Arbor Pólice Detective Sgt. Calvin Hicks described the two nude scènes which he had witnessed in the Dionysus" performance. "At about 9:40 p.m. the five actors and four actresses disrobed, and laid their clothes aside in a pile. Four of the males lay face down on the floor and the women stood over them, straddling their bodies. "A fifth male made a statement to the audience the ffect that he had to be born, and he proceeded to crawl, face upwards, on the backs of the I men through the legs of the females. During this I there were moaning and groaning sounds from the I iemales, as if they were giving birth. Then all nine I stood among the crowd in small aisles and put their I clothes back on." i The second nude scène was toward the end of I I the play, Hicks said, when the nine again disrobed I j and covered themselves in a thick red substance I which was to appear as blood. The audience was advised by one of the actors I that the former scène was to depict the birth of a I mythical wine god and the latter to depict the death I of a kmg. Hicks said he "could follow the two I scènes I descnbed but I couldn't follow the play as I awhole." He added that without the explanations of I '■ two scènes, he probably would not have I P-xl them either. Yesterday's testimony also included statements that the play's audience "represented a cross section of the University community" ; that "the performance could not be seen from the street," and that the "audience reaction" to the play consisted only of joining hands when asked to and applauding. At the close of the last act, the cast was confronted in the dressing room by "members of the pólice department including myself," Hicks reláted "Capt. Harold Olson advised them that the prosecutor was going to be called and that warrants would be asked for their arrest. They were photographed there." The actors and actresses had been scheduled to appear in court March 12, but that hearing was postponed indefinitely when the defendants could not leave New York due to Broadway commitments. The 10, who cali themselves The Performance Group, are now rehearsing for "MacBeth." Ceil Smith and Patrick E. McDermott were the only two to appear yesterday.