Good Will Is Theme For Suitcase Theatre 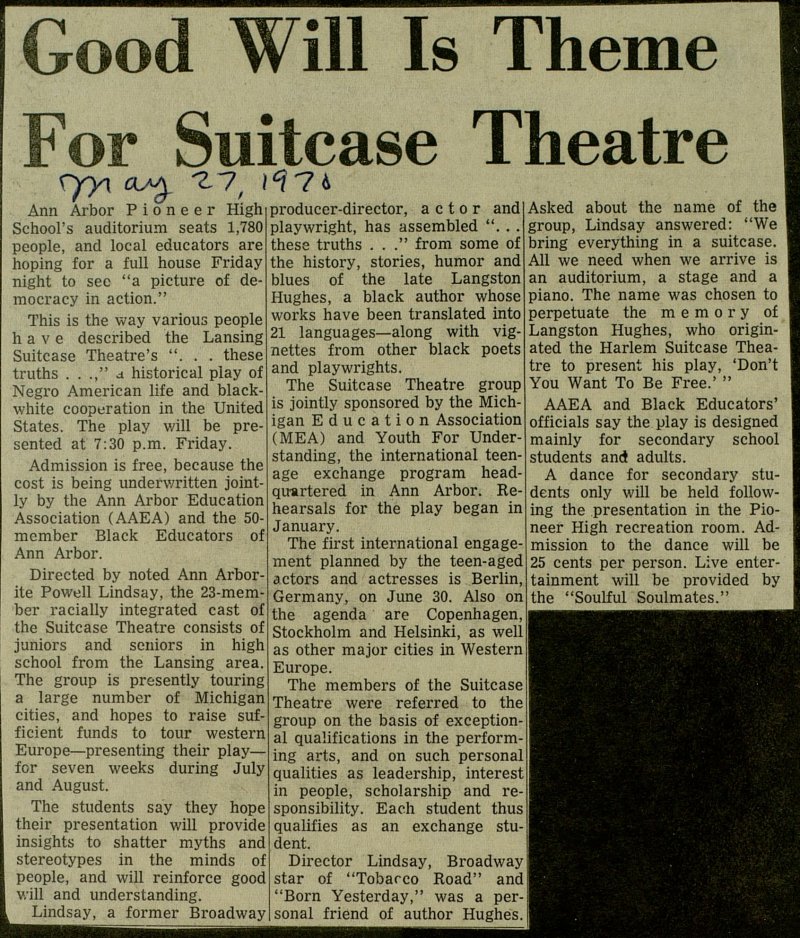 f f ■ - -ff Ann Arbor Pioneer High School's auditorium seats 1,780 people, and local educators are hoping for a full house Friday night to see "a picture of democracy in action." This is the way various people have described the Lansing Suitcase Theatre's ". . . these truths . . .," d. historical play of Negro American life and blackwhite cooperation in the United States. The play will be presented at 7:30 p.m. Friday. Admission is free, because the cost is being underwritten jointly by the Ann Arbor Education Association (AAEA) and the 50mcmber Black Educators of Ann Arbor. Directed by noted Ann Arborite Powell Lindsay, the 23-member racially integrated cast of the Suitcase Theatre consists of juniors and seniors in high school from the Lansing area. The group is presently touring a large numbor of Michigan cities, and hopes to raise sufficient funds to tour western Europe - presenting their play - for seven weeks during July and August. The students say they hope their presentation will provide insights to shatter myths and stereotypes in the minds of people, and will reinforce good vill and understanding. Lindsay, a former Broadway producer-director, actor and playwright, has assembled ". . . these truths . . ." from some of the history, stories, humor and blues of the late Langston Hughes, a black author whose works have been translated into 21 languages- along with vignettes from other black poets and playwrights. The Suitcase Theatre group is jointly sponsored by the Michigan Education Association (MEA) and Youth For Understanding, the international teenage exchange program headqitartered in Ann Arbor. Rehearsals for the play began in January. The first international engagement planned by the teen-aged actors and actresses is Berlin, Germany, on June 30. Also on the agenda are Copenhagen, i Stockholm and Helsinki, as well as other major cities in Western Europe. The members of the Suitcase Theatre were referred to the group on the basis of exceptional qualifications in the performing arts, and on such personal qualities as leadership, interest in people, scholarship and responsibility. Each student thus qualifies as an exchange student. Director Lindsay, Broadway star of "Tobacco Road" and "Born Yesterday," was a personal friend of author Hughes. Asked about the name of the I group, Lindsay answered: "We I bring everything in a suitcase. I All we need when we arrive is an auditorium, a stage and a piano. The name was chosen to perpetúate the m e m o r y of Langston Hughes, who originated the Harlem Suitcase Theatre to present his play, 'Don't You Want To Be Free.' " AAEA and Black Educators' officials say the play is designed mainly for secondary school students and adults. A dance for secondary students only will be held following the presentation in the Pioneer High recreation room. Admission to the dance will be 25 cents per person. Live entertainment will be provided by the "Soulful Soulmates."