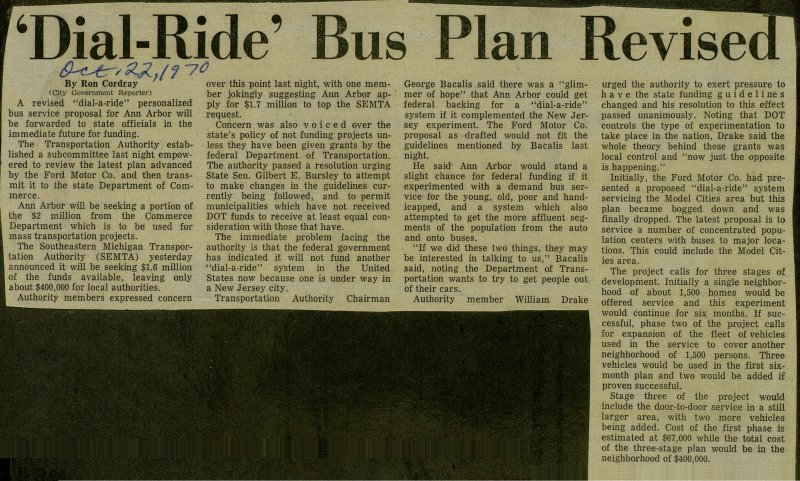 A revised "dial-a-nde" personalized bus service proposal for Ann Arbor will be forwarded to state officials in the immediate future for funding. The Transportation Authority established a subcommittee last night empowered to review the latest plan advanced by the Ford Motor Co. and then transmit it to the state Department of Commerce. Ann Arbor will be seeking a portion of the $2 million from the Commerce Department which is to be used for mass transportation projects. The Southeastern Michigan Transportation Authority (SEMTA) yesterday announced it will be seeking $1.6 million of the funds available, leaving only about $400,000 for local authorities. Authority members expressed concern over this point last night, with one member jokingly suggesting Ann Arbor apply for $1.7 million to top the SEMTA request. Concern was also v o i c e d over the state's policy of not funding projects unless they have been given grants by the federal Department of Transportation. The authority passed a resolution urging State Sen. Gilbert E. Bursley to attempt to make changes in the guidelines currently being followed, and to permit municipalities which have not received DOT funds to receive at least equal consideration with those that have. The immediate problem facing the authority is that the federal government has indicated it will not fund another "dial-a-ride" system in the United States now because one is under way in a New Jersey city. Transportation Authority Chairman George Bacalis said there was a "glimmer of hope" that Ann Arbor could get federal backing for a "dial-a-ride" system if it complemented the New Jersey experiment. The Ford Motor Co. proposal as drafted would not fit the guidelines mentioned by Bacalis last night. He said Ann Arbor would stand a slight chance for federal funding if it experimented with a demand bus service for the young, old, poor and handicapped, and a system which also attempted to get the more affluent segments of the population from the auto and onto buses. "If we did these two things, they may be interested in talking to us," Bacalis said, noüng the Department of Transportation wants to try to get people out of their cars. Authority member William Drake urged the authority to exert pressure to have the state funding guidelines changed and his resolution to this effect passed unanimously. Noting that DOT controls the type of experimentation to take place in the nation, Drake said the whole theory behind these grants was local control and "now just the opposite is happening." Initially, the Ford Motor Co. had presented a proposed "dial-a-ride" system servicing the Model Cities area but this plan became bogged down and was I finally dropped. The latest proposal is to I service a number of concentrated I lation centers with buses to major locations. This could include the Model Cities area. The project calis for three stages of development. Initially a single neighborhood of about 1,500 homes would be offered service and this experiment would continue for six months. If successful, phase two of the project calis for expansión of the fleet of vehicles used in the service to cover another neighborhood of 1,500 persons. Three vehicles would be used in the first sixmonth plan and two would be added if proven successful. Stage three of the project would include the door-to-door service in a still larger area, with two more vehicles being added. Cost of the first phase is estimated at $67,000 while the total cost of the three-stage plan would be in the neighborhood of $400,000.